The following improvements are the .NET highlights of the release:

Note: csproj projects created with earlier releases of Visual Studio 2017 or on the command-line with the .NET Core SDK must be manually updated to load in the latest release. Please read the Updating .NET Core Projects section, below, for more information.

The .NET Core tools have been significantly improved in this update, fixing bugs and usability issues. A major focus of this release has been simplifying the project file and improving project migration. We are no longer using the “preview” term, but “RC3” to match Visual Studio 2017 RC.

This .NET Core SDK release is available in Visual Studio 2017 RC, as part of the .NET Core cross-platform development workload. It is also available in the ASP.NET Web workload and an optional component of the .NET Desktop workload. These workloads can be selected as part of the Visual Studio 2017 RC installation process. The ability to build and consume .NET Standard class libraries is available in the all of the above workloads and in the UWP workload.

You can also install the .NET Core SDK release for command-line use on Windows, macOS and Linux by following the instructions at .NET Core 1.0 – RC3 Download.

The release is also available as Docker images, in the dotnet repo. The following images include the new SDK:

The aspnetcore-build repo has also been updated.

The .NET Core SDK includes a set of .NET Core Tools and one of more runtimes. In previous SDK releases, there was only ever one runtime included. This change in approach was made to make it easier to acquire all supported runtimes as a single step. This experience helps when you are collaborating with developers who are using multipe runtimes. It also makes it easier to update multiple runtimes on your machine when fixes are released. The SDK naturally gets larger, but not as much as you might guess since there is only ever one set of tools in the package. It also enables us to improve the tools for everyone more easily.

The following example is the new, much shorter, default template for .NET Core apps. This is the final project format for .NET Core.

The following csproj elements/attributes are no longer included in the project file.

The default template for ASP.NET Core apps is only slightly larger and also does a good job of demonstrating what package references look like, for example with the ASP.NET Core meta package.

You need to remove the following data from your existing csproj files:

Major improvements have been made to project file migration (project.json/xproj -> csproj). The team fixed many project migration issues to improve the migration experience.

We recommend that you discard previously migrated csproj project files and do a fresh migration from project.json/xproj so that you’ll get the new improvements. You won’t need to follow the manual csproj project file updates described in the section above.

.NET Core CLI commands were added to make it easier to manage your projects from the command-line. Our goal is to ensure that you can make project changes manually, via CLI commands or via UI in Visual Studio.

Note that these commands check for illegal states, as appropriate. For example, If you attempt to add a package that is not compatible with a given project, the command will (correctly) fail.

You can now remote debug .NET Core apps running on Linux over SSH from Visual Studio. See the process attach dialog, attaching to a .NET Core process on Linux! You may wonder where the docs are for the new tools. The .NET Core Docs site continues to document the project.json tools and experience. We intend to have a complete set of docs in place for Visual Studio 2017 RTM.

When you create a new .NET Framework or UWP project, you will now be asked if you want to use the existing packages.config or the new PackageReference format, as you can see below.

You can set the default NuGet format type in the dialog above or in the NuGet settings dialog, as you can see below. 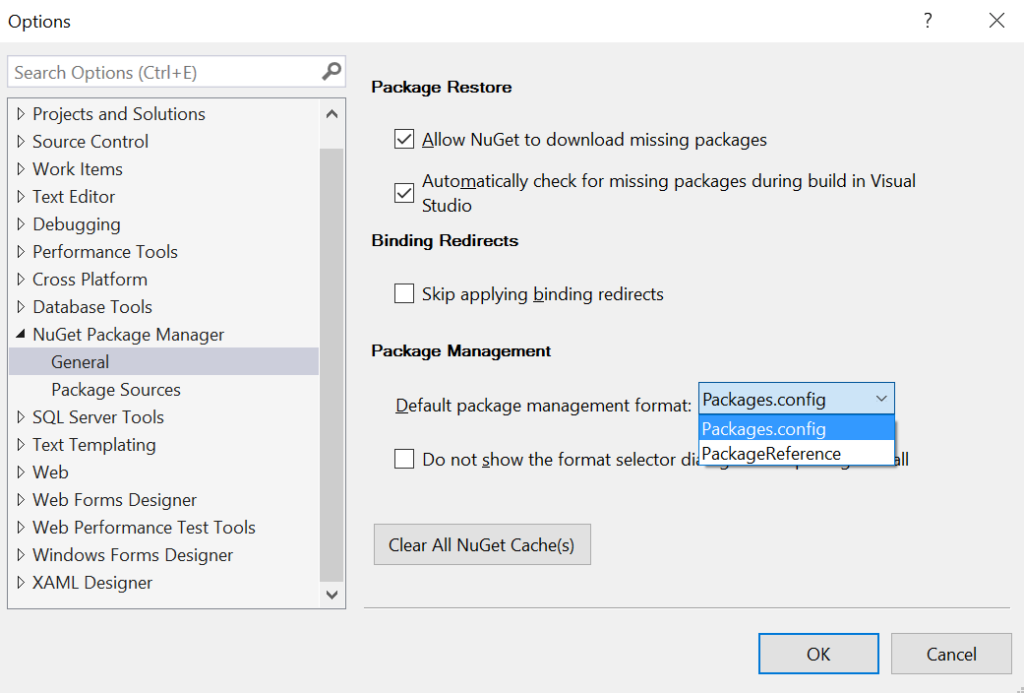 PackageReference is the new NuGet format going forward. We recommend that you start using it for new projects. It is new in Visual Studio 2017 and is not supported in earlier Visual Studio versions.

At present, there is no automated way to convert an existing project that uses packages.config to the new PackageReference format. We know that this is an important scenario that you would like to see integrated into Visual Studio and are working on enabling it. We expect to make this capability available after Visual Studio 2017 releases.

We’ve updated .NET Native’s System.Numerics.Vectors support to be hardware-accelerated on all .NET Native platforms (using 128-bit SSE2 on x64 and x86 and 128-bit NEON on ARM32)!

Here’s a rendering of a Mandelbrot set with .NET Native 1.6:

As you can see, .NET Native 1.6 takes just 1.9 seconds while .NET Native 1.4 takes 64 seconds to do the same work! The use of SIMD registers providers a major improvement in performance for System.Numerics.Vectors.

.NET Native is now included within the Microsoft.NETCore.UniversalWindowsPlatform NuGet package, starting with version 5.3.0. This means that you can select the version of .NET Native you want to use by selecting a specific version of the Microsoft.NETCore.UniversalWindowsPlatform package (starting with version 5.3.0). This capability is new with Visual Studio 2017. By using NuGet, we can ship .NET Native updates more easily and it’s easier for you to select the version you want to use, per project.

Here are the steps:

If you do not see version 5.3.0 listed, make sure that the Package Source is set to nuget.org.

You can revert back to .NET Native 1.4 at any time by rolling back the Microsoft.NETCore.UniversalWindowsPlatform NuGet package from 5.3.0 to any earlier version such as 5.2.2 or 5.1.0. This can be done by following the same steps outlined above with the desired version.

Publishing apps to the store

You can publish apps to the Windows Store with .NET Native 1.6 RC, starting today.

We will be actively listening for feedback and may make additional changes for the Visual Studio 2017 RTM. You will need to upgrade to a later version of the Microsoft.NETCore.UniversalWindowsPlatform package if there are additional updates at that time.

Here are some of the general improvements:

Here are some of the more common customer reported issues that we fixed:

.NET native does not currently support portable PDBs. When debugging managed components with portable PDBs in application compiled with .NET native, you may have trouble setting breakpoints, stepping in, and/or inspecting variables of related types in those components. You can delete the files from the local package directory (usersuserName.nugetpackages) to workaround the warning. This change was also made in the servicing update for .NET Native 1.4 in the latest update to Visual Studio 2017 RC. Earlier versions of .NET native may incorrectly throw OutOfMemoryException and crash during build when consuming portable PDBs.

We announced our intention last summer to bring more uniformity to .NET projects and .NET development. Today’s releases are a major step forward on that plan. Our first focus has been the .NET project format and build tools, as described here. Later this year, we’ll focus more on available APIs. We intend to make .NET development simpler and easier and will stay focussed on that vision.

Thanks for using Visual Studio 2017 RC, for trying out the new .NET features and for giving us feedback. We’ve made major improvements for .NET development across multiple application types. We hope that you like them. Tell us what you think!

Please share feedback in the comments or send it directly to us via email:

Thanks for Stacey Haffner, Joe Morris and Zlatko Knezevic for their contributions to this post.