Visual Studio Test (VSTest) and the Run Functional Test (RFT) tasks are used widely for continuous testing with Team Build and Release Management. As we thought about how test execution in the pipeline should evolve the guiding principles were to ensure that test execution in the pipeline is fast and reliable for all types of tests, be it unit tests (native MSTest as well as 3rd party) or functional tests – both UI and non-UI. Build and Release agents are already unified, so we were wondering if we could have Test Agent integrated as well  and get a ‘single automation agent to rule’ 🙂

So, what advantages does the unified agents work bring?

You can leverage the agent pool for all purposes – build, release and test.

Let us get to the how-to now. The capabilities discussed here apply to the Visual Studio Test v2 (preview) task, so make sure you switch the task versions.

The first one is getting to know phases. When you create a release definition, you can add different types of phases – agent phase, deployment group phase or a server phase. You can add multiple phases of different types, in the order you need them to build your pipeline. Lets take a closer look at the agent phase settings. VSTest task in this mode is special. It recognizes that it’s a multi-agent phase and runs tests in a distributed manner across the allocated agents. Since other tasks are run across all agents, any pre and post test steps I may want to do, also run equally on all the agents – so all the agents are prepped and cleaned up in a consistent manner. Test execution also does not require all agents to be available at the same time. If some agents are busy with another release or build, the phase can still start with the available number of agents that match the demand and test execution starts. As additional agents become available, they can pick up any remaining tests that have not been run yet. Here’s a screenshot of logs from my multi-agent test run, where some tests have failed. 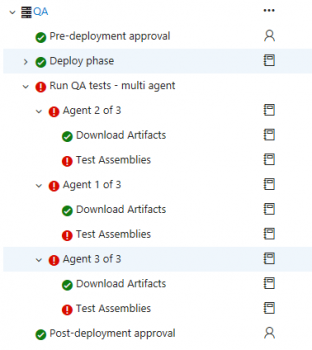 Artifacts are automatically downloaded when the phase starts, so my test assemblies and other files are already on the agent and I don’t need a copy files task.

So now if I want to publish an Azure web-app and run a large set of tests with fast test execution, I will model my Release environment as 2 phases – 1 being the deploy phase (runs on a single agent – I don’t want multiple agents to deploy the same app concurrently :-)) and a test phase that uses multi-agent mode to do test distribution. This also means that I can use different agent queues for the 2 phases, allowing me to manage agents for different purposes separately if I so choose. 3. Multi-config – this mode is driven by ‘multipliers’ pretty much the same way as a multi-config build is. Define the multipliers as variables and based on the values for these variables, the various configurations are run. In the case of Build, typically you would use BuildPlatform and BuildConfiguration as multipliers. Let us see how to apply this to testing. Same example as before – I want to deploy a web-app to Azure and run cross-browser tests on IE and Firefox. So I will model my environment as 2 phases – 1 deploy phase and the second is test phase.

The test phase is setup as multi-config using ‘Browser’ variable, that has the values IE and Firefox. My phase will now run using these configs (2 in this case), 1 agent gets assigned a config and the appropriate config values are available for tasks to use. 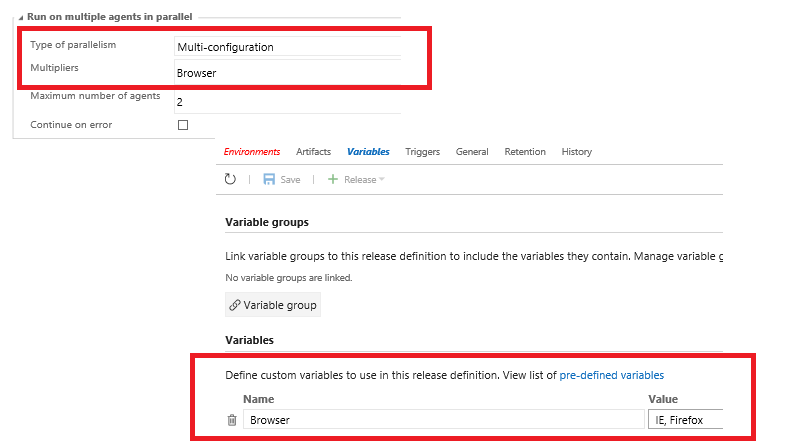 In my case, I want to use the Browser value to instantiate the right browser in my tests, so I will pass them as Test Run Parameters and access the value using TestContext in the test code. I will also use this value to title my test runs appropriately so that if a test fails in a particular config, I can easily figure that based on which run it came from.

That’s all for today’s post. Give the VSTest v2 task a spin and let us know your feedback. Leave comments below or reach me at pbora AT microsoft DOT com.

Monitoring build resources with the TFS 2017 management pack
The Microsoft System Center Management Pack for Visual Studio Team Foundation Server 2017 (what a name!) has been available for about a month now. One important change to...

Aaron Hallberg
March 28, 2017
0 comment
Team Services Extensions Roundup – March
February didn’t hold the title of best month on record long – it’s already passed that title to March! A huge thanks to our publishers and customers who continue to...