Visual Studio 2012: “Where is the Test Toolbar. Couldn’t find it anywhere”

On Jason Zanders’s blog I noticed the question:

…where is the Test Toolbar. Couldn’t find it anywhere.

In Visual Studio 2012 we made an effort to simplify the user interface to give people more room for their own work and to make the IDE more productive.

Part of this simplification was not showing as many toolbars by default.  In most cases those toolbars are still there – you just need to enable them via **Tools > Customize **or right click on the standard toolbar and choose **Customize.   **

In the case of the Test toolbar many of the paradigms have changed with the introduction of the Test Explorer so the old toolbar in addition to not having a lot of people using it just wasn’t relevant in some cases so we did not include it in Visual Studio 2012. Add Commands you want for your new test toolbar 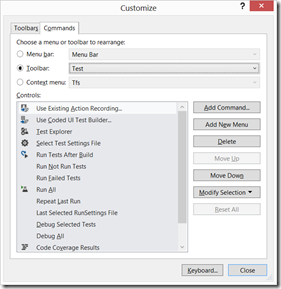 Add the Test Commands to your new test toolbar Repeat Step 3 Until you have created the Test Toolbar you want.

I would also recommend you now export your settings to preserve your new toolbar. Customizable Process Guidance for VS ALM 2012
Customizable process guidance is now available for each of the default process templates that VS ALM Team Foundation Server provides. You can download and unzip these ...

Kathryn Elliott
September 11, 2012
0 comment
Odin ships Axe 3.4 simultaneously with Visual Studio 2012
One of the frustrating things about Test Automation is that to do it properly you need your testers and developers to work together but the problem arises from the fact ...