One of the frustrating things about Test Automation is that to do it properly you need your testers and developers to work together but the problem arises from the fact developers don’t want to write tests and testers don’t want to code. For this reason most companies find it very difficult to get automation their automation efforts off the ground!

The Axe product from Visual Studio Industry Partner, Odin, uses code generation to enable testers to use Excel to create lots of robust test automation code without having to pick up a C# book!

In a nutshell, Axe allows Testers to define tests in Excel spread-sheets and through some clever code generation techniques churns out about 95% of the code required for automation, the other 5% (customization to the code generator and supporting functions) can be handled by either the test or the development team. Understanding that automation is only part of the equation, Axe also takes care of writing the test steps in MTM in readable human form. 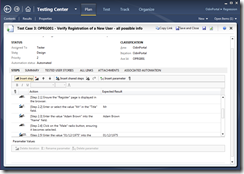 Axe is installed alongside Excel and Visual Studio. All you  need is a VS test project for Axe to inject code into. Axe even supplies a handy wizard to setup up the project and wire it up so testers can focus on writing tests(in Excel).   Axe also enables developers to focus on the development efforts such as setting up the VS solution, providing UI Maps and any customizations to the code generator.

Having played with Axe at StarEast I can honestly say it really goes a long way to solving one of the age old conundrums that has plagued test automation projects for years, how to make Test automation easy and a team game.   The fact Axe also emits manual tests gives you the best of both worlds!

Learn more about how Axe can revolutionize your automation regime here

Changes to the Process Templates between VS 2012 Beta, RC and RTM
This blog post is for the people who started using the Beta or RC version of VS 2012 and created projects in either of these versions that are still active.In case you ...