In an earlier post we had mentioned how Smart Unit Tests can emit a suite of tests for a given code-under-test, and how it can manage this test suite as the code-under-test itself evolves. For any given method serving as the code-under-test, the emitted test suite comprises of a “parameterized unit test” and one or more “generated unit tests”, and the following figure illustrates the *Pex** custom attributes used to identify the ***test-to-code binding***, that in turn enables such management. These attributes are defined within the Microsoft.Pex.Framework namespace. 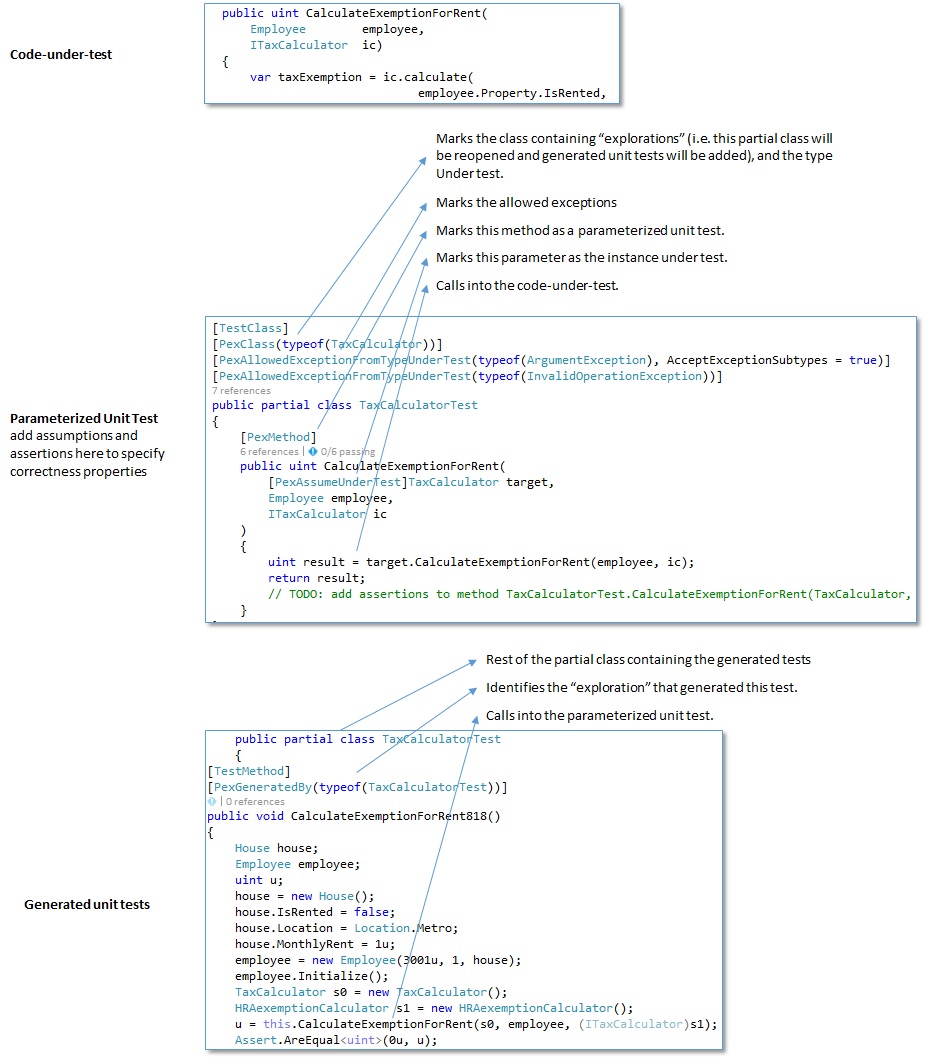 At compile time, these attributes are baked into the assembly as metadata for the types and methods to which they were applied. On subsequent invocations, Smart Unit Tests can reflect on the assembly and, with the help of this metadata, re-discover the test-to-code binding.

The management of these generated unit tests involves the following:

Here is how it is done:

Given that the parameterized unit test and the generated unit tests are placed into the same assembly, the testing engine pre-processes any existing “generated unit tests” (emitted previously) by scanning the assembly for the test fixture (identified by the type having the PexClass annotation). Generated unit tests are recognized by the Test attribute (the TestMethod, and PexGeneratedBy annotations in this case). For each such unit test method, it fetches the source code, trims away all whitespaces and uses the resulting string as a “hash” of the generated test. Once this is done, the testing engine has a dictionary of such hashes that it can consult to determine whether a newly generated test already exists. Duplicate tests are not emitted, and if a previously existing test case is not generated, it is deleted.

Keeping a suite of unit tests in sync with a fast-evolving code base is a challenge. Manually adapting the code of a potentially large number of unit tests incurs significant costs. We hope such automatic management of the suite of generated unit tests helps in addressing this challenge. As ever, report any issues or overall feedback below, or through the Send a Smile feature in Visual Studio.

Changes in creating VSO Environments in Visual Studio IDE
Recap of the scenario shown in November connect.   Last November, we introduced infrastructure-as-a-code scenario for developers in VS IDE. All deployment ...