Recap of the scenario shown in November connect.

Last November, we introduced infrastructure-as-a-code scenario for developers in VS IDE. All deployment artifacts wiz. Azure Resource Manager templates, deployments scripts can be included in a deployment project in the solution, checked into version control, and the resources can be deployed using the project. To make it easier to share the resources, Environments can be created in a team context in VSO, which then can be assigned to other teams in VSO. Here is a blog on the same.

Based on the feedback from the ALM community, and the need for consistency among the environments being used in VS IDE, Build, Test and RM, we decided to move all our experiences to the Team Web Access. Hence, we have aligned our efforts for breadth play, supporting various cloud providers, and bringing in consistency among the environments being used across ALM.

Starting 29th April, below is the updated workflow for creating and managing environments- 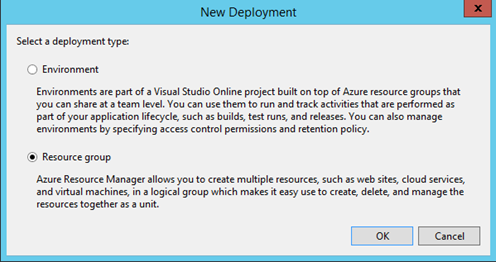 2. Environments hub – The Environment hub showed up the in the team explorer of Visual Studio IDE, along with the other hubs. Within the hub, a developer could list all his personal/team Environments, and perform operations on them. 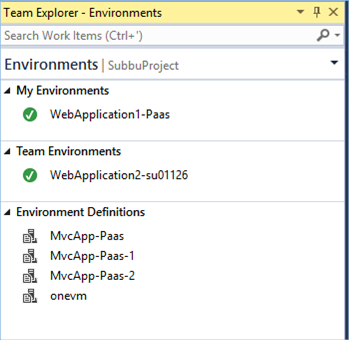 Alternative: Since all these environments are backed by Azure Resources Groups, hence to view them and perform operations on them, the developer will have to go to the new azure portal.

Above Preview features were installed as a part of the Azure SDK 2.5, and have been updated in Azure SDK 2.6.

To reiterate, the core developer scenario of deploying to Azure has been optimized to simplify the overall experience. Since our service does not store any critical data, we will not persist them in our database. Any subscription related information stored in our database will also be deleted. All resources provisioned in Azure, will continue to exist as is.

We are working to bring in support for a large set of Clouds wiz. Azure, Standard, VMWare etc. and a breadth of experiences around different cloud providers will be available in Visual Studio Online portal and in TFS.