We are excited to announce that release gates are now generally available to all VSTS users and accounts so everyone can now add progressive exposure to their continuous delivery pipelines.

What are release gates

If you haven’t tried them yet,  Release gates enable data-driven approvals for phased deployments with VSTS based on monitoring of deployment health through the pipeline. Using release gates, you can specify application health criteria that must be met before release is promoted to the next environment. Prior to or after any environment deployment, all the specified gates are automatically evaluated until they all pass or until they reach your defined timeout period and fail.

4 types of gates are included by default for every account. Release gates are also an extension point. You can easily add gates via the VSTS marketplace or write your own if you want to integrate with any system used by your organisation.

Since we announced the public preview of release gates in November 2017, we’ve been blown away by the innovative ways people have been using the feature and we have received great feedback from customers and the community.

For example, customers have:

You can learn more about release gates with the docs or in the video below.

We also have a video and hands-on lab to get you started.

Many of the smart folks in our  MVP community  have also been blogging about their interesting usages for release gate including blog posts on visualstudiogeeks.com, lfraile.net,  deliveron.com, blackmarble.co.uk and jessehouwing.nl. 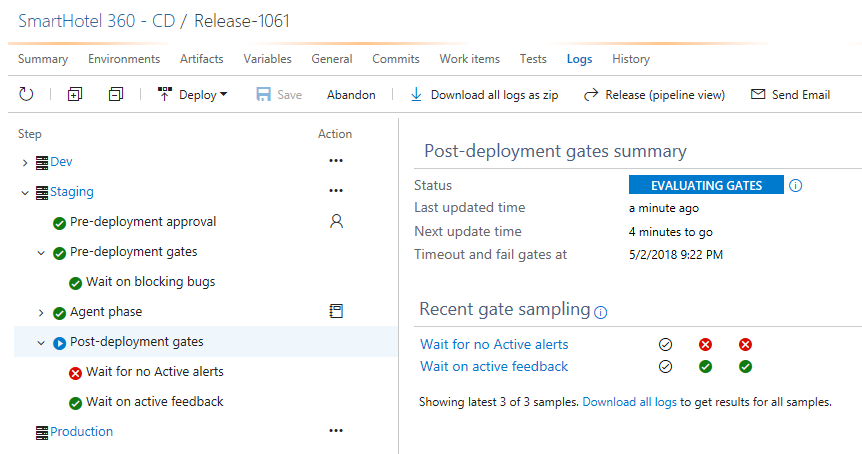 If you have any feedback on Release Gates or examples of ways  you are using them in your pipelines we would love to hear from you. As well as the comments below you can reach us   on  Developer Community, make suggestions on  UserVoice, get advice on  Stack Overflow, and get support via our  Support  page.

Erin Dormier
May 7, 2018
0 comment
Shift Left with SonarCloud Pull Request Integration
One of our DevOps "habits" is to Shift Left and move quality upstream.  Including additional validations earlier in the DevOps pipeline means identifying potential ...