One of the more powerful git commands is the cherry-pick command. This command takes one or more existing commits and applies each commit’s changes as a new commit on a different branch. This can be an extremely powerful component of many git workflows such as the Azure DevOps team’s Release Flow. To highlight a common use-case for it, let’s talk about hot-fixing release branches.

In this scenario, we have a master branch that devs contribute to. When a release is ready, a release branch is created based off the latest commit in master and a deployment goes out to end users. After people begin using this newly released version, your team starts to get flooded with new bug reports—now it’s time for a hotfix!

As the dev tasked with fixing the bug, you create a hotfix branch (based off the head of the release branch) and commit the necessary changes (commits A and B in Figure 1) to that branch. After you’re satisfied that you have addressed the issue, you then open a pull request (PR) back into the release branch. The next step is to ensure that the next release doesn’t contain the bug—this is exactly when cherry-picking can help. So, you cherry-pick the hotfix commit(s) to a branch based off the head of master and open a PR into master.

This workflow is so common that Azure DevOps has a built-in capability to cherry-pick a PR’s commits to a new topic branch directly from a browser. However, this can be cumbersome if you need to apply commits to multiple branches at once while also opening new PRs.

For example, inside Microsoft, it is very common for product teams to cherry-pick changes into multiple branches at the same time. For example, the Office team has multiple versions at various stages of deployment at any given time, meaning there are multiple release branches to hotfix.

With the current mechanism, you would have to cherry-pick to each new topic branch and then open a PR from the topic branch into the target branch — for every branch that needed the hotfix. Therefore, we built this extension to help Microsoft product teams, such as Office, and we wanted to share it with everyone!

In order to provide an easy way to cherry-pick a PR’s commits to multiple branches at once, we added a new context menu item that sits right below the current cherry-pick menu item. For each branch selected, a new topic branch will be created with the applied changes. If the Pull request option is selected, a pull request will be opened to the target branch. 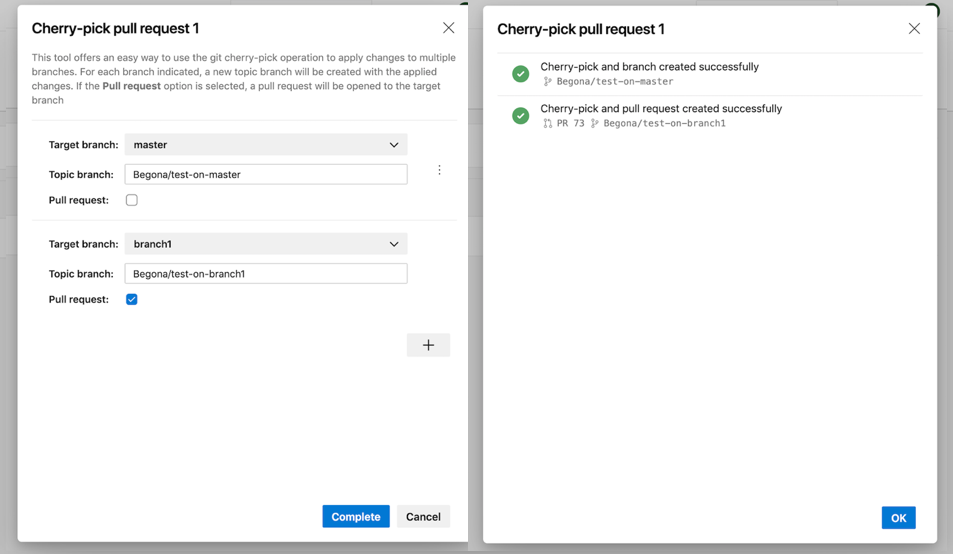 This makes it much simpler to support workflows where multiple (or even just one) destinations need to have commits applied.

Note: because this extension is open source, you can file feature requests, suggestions, and issues at GitHub.

Lastly, please leave us a review in the marketplace; we’d absolutely love to hear your feedback.

David Hathaway
June 12, 2019
4 comments
Top Stories from the Microsoft DevOps Community – 2019.06.14
I'm back home this week in England - and after week in sunny Raleigh-Durham, North Carolina (and before that, a week in even sunnier New Orleans), the cold rain has me ...