This week we are releasing the final CTP for Visual Studio 2012 Update 1.  This release is a Consumer Technology Preview of the forthcoming Visual Studio Update releasing in November.  As I stated in my earlier post the intention of the Visual Studio 2012 updates is to provide continuous value to customers, adding new capabilities year-round to features in the main product release. These releases will be aligned with the core software development trends in the market, ensuring developers and development teams always have access to the best solution for building modern applications.

New features in the final CTP for Visual Studio 2012 Update 1.

There are 38 features and numerous bug fixes in the Visual Studio Update 1, please see the bottom of this post for the complete feature list.  In this CTP we have added 9 of these new features for you to take a look at: 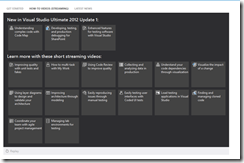 Visual Studio Premium and Ultimate 2012 can use the full Code Analysis rule set to analyze Windows Phone Applications to discover potential issues in your code, such as non-secure data access, usage violations, and design problems. With Visual Studio update 1 we have tuned these rules to reduce the quantity of false warnings; including CA2149 Transparent code must not reference security critical items 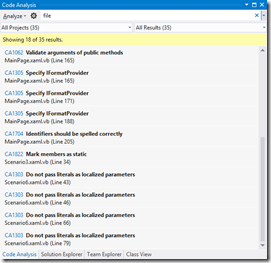 The new cross-browser testing support enables the recording (and authoring) of browser-based user interface tests to be replayed against the latest versions of Firefox and Chrome using Selenium.    This functionality is enabled through the  BrowserWindow.CurrentBrowser() property.  To enable this cross-browser testing with the Selenium the Selenium NET Bindings and the Selenium ChromeDriver are needed to be installed.  For your convenience, we have put these two packages into a single installer on the Visual Studio Gallery 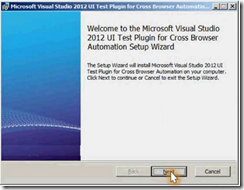 One of the exciting features in Visual Studio 2012 was the ability to create an image action log in coded UI tests and for exploratory tests –when targeting Windows Store applications.  With this CTP we have added the capability to capture an image log for any exploratory test. 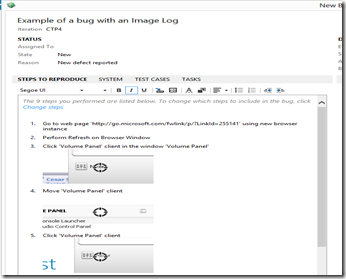 Data driving has now been added to the Windows Store unit test library. By adding multiple DataRow attibutes to your test method you now create multiple test iterations. In the following snippet is an example a data driven unit test by specifying two test iterations. 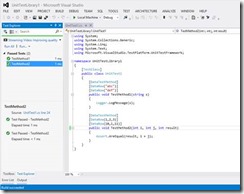 NOTE: We also plan to release a helper library for asynchronous tests on Visual Studio Gallery 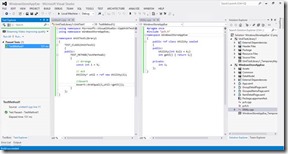 Now debug dumps of native C++ apps from ARM powered computers and devices with the same dump debugging functionality that you are accustomed to on x86 or x64.  To get started, just open the dump file in Visual Studio and click on the action link to start debugging! 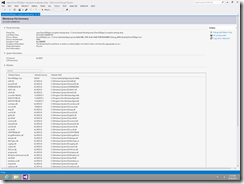 The ability to filter by traits was enabled in the last CTP.  In this CTP we now enable filtering by user definable traits for Windows Store unit tests and Native unit tests. 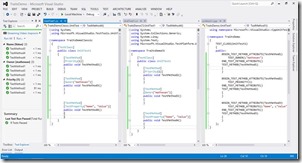 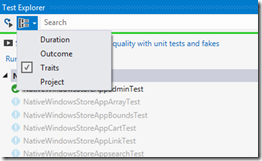 For your convenience you will find the download page for the Visual Studio 2012 Update 1 CTP at:

Please note: as this is a Technology Preview, it is NOT meant to be run on production workstations or servers.  You can install these updates on top of the RTM release of Visual Studio 2012 and going forward, future updates will install correctly on older updates.

Please note: as this is a Technology Preview, it is NOT meant to be run on production workstations or servers.  The testing of these CTPs is not as exhaustive and complete as the testing for the release product.  The recommended approach for upgrading Visual Studio on developer workstations is installing the latest Visual Studio Update 1 CTP on top of the RTM or a previous CTP build.   NOTE: since setup is updating the files during these updates there is NOT a “downgrade” path to get back to a previous release.

How to Provide Feedback on this Release

Feedback is an important part of this process. To supply feedback, please use the Visual Studio 2012 feedback tool. For your convenience the feedback tool automatically captures the build number and attaches system information – so we know any bugs/suggestions are for this technology preview.

Testing SharePoint 2010 with Visual Studio 2012 Update 1
Another in my MVP series of blog posts: This post is by one of the most active of the Canadian MVPs, Wes McDonald.  I find it interesting that Wes and our neighbors ...

Charles Sterling October 29, 2012
0 comment
Directory of common test tools and utilities
One of the common challenges with getting started with a new technology is discovery of the tools and resources that can help you get started and increase your ...