Battery draining applications result in bad customer experience and poor ratings. Optimal battery usage is an important aspect that a developer must consider. This post introduces the Energy Consumption tool, a new tool in the Visual Studio Performance and Diagnostics hub that enables you to optimize your application for energy consumption.

Low powered tablet devices are an integral part of our lives. We start and end our day with these devices using them for work, catching up with friends, reading, watching movies and lot more of our daily tasks. On such devices, battery draining applications lead to poor user experience and negative user reviews. It is therefore important that developers be able to estimate, and optimize, the energy impact of their applications.

Application energy consumption is dependent on a wide variety of system resources and conditions. Energy consumption depends on, but is not limited to, the processor the device uses, memory architecture, the storage technologies used, the display technology used, the size of the display, the network interface that you are connected to, active sensors, and various conditions like the signal strength used for data transfer, user settings like screen brightness levels, and many more user and system settings.

For precise energy consumption measurements one needs specialized hardware. While they provide the best method to accurately measure energy consumption on a particular device, such a methodology is not scalable in practice, especially if such measurements have to be made on multiple devices. Even then, the measurements by themselves will not provide much insight into how your application contributed to the battery drain, making it hard to focus on any application optimization efforts.

The Energy Consumption tool being introduced in Visual Studio 2013 for Windows 8.1 store apps, enables you to estimate your application’s energy consumption without the need for any specialized hardware. The tool provides power estimates that prioritize information that is in control of a developer, rather than trying to accurately predict the power characteristics of a given device. Such estimation is made possible using a software power model that has been trained on a reference device representative of the low powered tablet devices your application might run on. 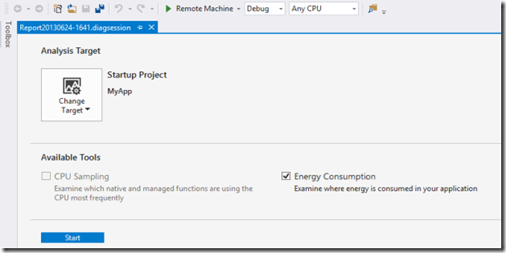 The suggested way to use the Energy Consumption tool is to profile your scenario on a low powered tablet device, as the reference device is best represented by such a device. To run a profiling session on a tablet device, Configure remote profiling on the remote device and then select “Remote Machine” as target in target selection drop down box.

In the Diagnostics Hub page, select “Energy Consumption” and press “Start”. This starts the application along with the profiling session. Go to your application and use it as you would use it normally, taking the application through the scenario that you wish to profile.

Once done, press “Stop collection” to stop the profiling session and show the Energy Consumption report.

The report presents the application power/energy consumption for the given scenario. Let’s look at the various sections of the report from top to bottom referencing the screenshot above

The Energy Consumption tool provides a powerful way to profile your application for energy, enabling the developers to understand relative power consumption of the various resource the application uses and optimize their respective usage. Subsequent posts will go into details on how to use the tool and interpret its results, but for now to see the tool in action, please take a look at our //build/ talk titled Visual Studio 2013 Diagnostics Tools for XAML-Based Windows Store Apps.

We keenly look forward to your feedback about the tool, and going forward what you would like to see in the tool. Please let us know your comments via UserVoice or Connect and by asking questions in our MSDN diagnostics forum.

XAML UI Responsiveness tool in Visual Studio 2013
(Posting for a team mate and friend Pratap Lakshman)   From the perspective of interaction-performance applications need to be “fast” and “fluid” - fast to ...

Charles Sterling
July 11, 2013
0 comment
Performance and Diagnostics Hub in Visual Studio 2013
Update: this blog post has been updated for Visual Studio 2013 Update 3 – enjoy! If you attended our Build conference or watched some of the videos, you may have seen ...