With each quarterly blog update, we bring you a list of enhancements we’re making to Azure DevOps. This time around, we’re also making some changes to the process itself, and we want to share those with you. The current features timeline lacks a state column for features, which requires you to leave the page to check the status of each individual item. Additionally, the states we currently have, which are “Planned,” “In Progress,” “Closed,” and “Cut” don’t cover all the stages of a feature’s lifecycle. So, we are adding more states to the feature workflow and making those states visible on the timeline. We hope this makes it easier for you to understand what’s happening with Azure DevOps and what is coming up.

Feature in the discovery phase. We have decided to build this feature, but are still figuring out how.

We have started working on the feature.

We have shipped an early version, and we are gathering feedback.

Ready for production use with associated SLA and technical support obligations.

We have encountered unexpected circumstances, which caused delays. 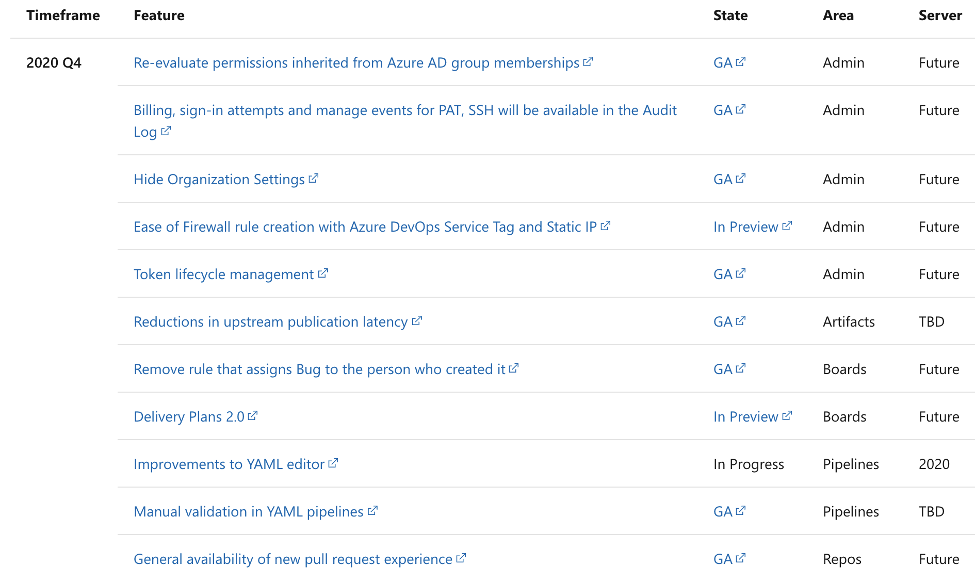 When a feature is in the “In Preview” state, it will have a clickable link that takes you to a blog post that contains information about how you can join the preview. Similarly, the “GA” status will also include a link to the release notes or a documentation page for that given feature. The roadmap will get updated on a monthly cadence moving forward to increase transparency.

We want to hear your feedback

We always appreciate your feedback, because it helps us prioritize what we should work on. If you have a new feature suggestion or a change you’d like to see for an existing feature, let us know on the Developer Community or reach out to us on Twitter.