In understanding social media, context is key. Current social-media analytics can tell us what topics are trending, but they don’t provide insight into the tenor of the conversation or who are engaged in it. We recently joined with social marketing startup m-oracle, based in Atlanta, for a two-day hackfest to develop a solution using Azure Functions and the Cognitive Services Topic Detection and Sentiment Analysis APIs to map out context-aware social media influence.

Social media influence can be measured by existing tools and services. However, the factors they consider, such as number of followers or number of posts shared by others, can lack important context. An athlete might have written a widely-shared post about a brand of shoes, but was the content positive or negative? m-oracle is developing BindexT, software as a service to address a need for massively-scaled, intelligent, and context-aware social media insights.

BindexT is meant to encompass multiple social media platforms, factors, and data points. As a first step, our team looked at solving a smaller problem: how can we develop a solution for finding, analyzing, and displaying Twitter influencer data that goes beyond a “just-the-numbers” approach ?

We wanted to first identify Twitter users influential within a given subject matter domain and assign them an influencer score based on factors, such as number of followers and engagement. Specifically, we wanted to discover:

Today, identifying Twitter influencers, their top conversational topics, and the tenor of that conversation is largely a manual process. Automating some or all of this process through machine learning has the ability to improve the results and discovery time for social media marketing operations.

Our solution included the following components and architecture, followed by explanations of why certain technologies were selected. 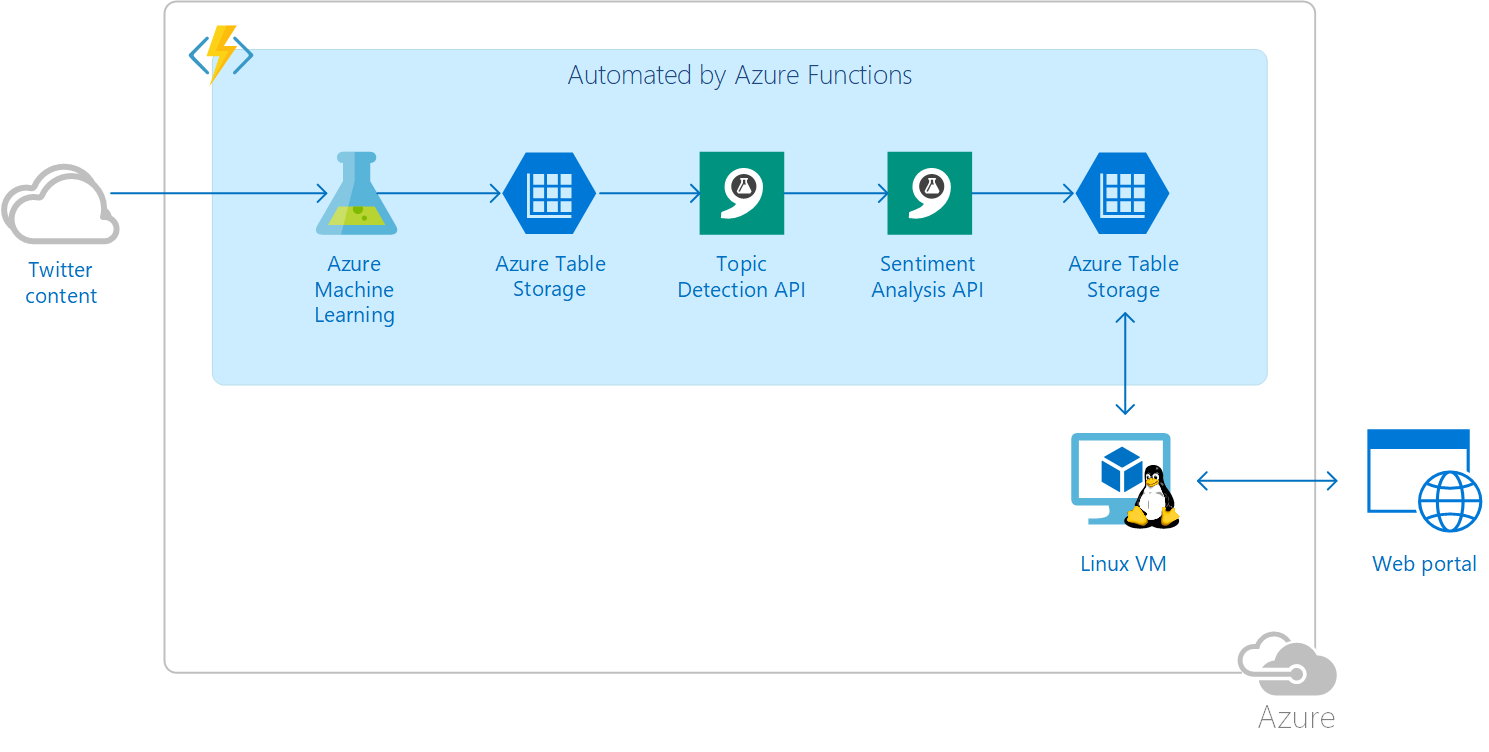 Luckily for us, a team at Microsoft recently published a ready-to-deploy solution for identifying Twitter influencers using Azure ML Studio. This project gave us exactly what we needed: an up-to-date list of Twitter influencers within certain topic domains such as “basketball.”

Once we’ve determined which Twitter users are influential within a given domain, we want to know what subtopics they post about most frequently.

Microsoft Cognitive Services expose prebuilt machine learning algorithms as simple REST APIs. To use the Topic Detection API for this project, we compiled at least 100 tweets into a single JSON object and then sent it to the REST endpoint. This call returns a second endpoint rather than the full results, as processing the results can take a few minutes. Once the results are ready, we sorted them by frequency and retain the top three topics for each influencer.

Once we found the top three topics for a given Twitter influencer, we queried that user’s most recent 200 tweets on the topic and sent each corresponding tweet to the Sentiment Analysis API. We retrieved the minimum, maximum, and average sentiment associated with each topic and then stored these values in a separate table within Azure Table Storage. These API calls and the subsequent data storage were kicked off from within Microsoft’s serverless architecture platform, Azure Functions. Our Azure Function was set to run on a recurring timer.

Finally, we built a web front-end that allowed users to search data stored in Azure Table Storage for certain keywords. The website would display relevant Twitter influencers with their associated subtopic and sentiment ratings.

Following the hackathon, we recognized that while this solution helps prove out a central cognitive technology, our data storage and serverless architecture may need to evolve to encompass additional technologies to scale.

Because the Topic Detection API does not return a full list of which documents correspond to which topics, we needed to get the topics, then query the user for those topics using the Twitter API. However, the Twitter API has its own limitations around how public users’ timelines can be queried. The solution we implemented was to create a table to temporarily store a given user’s tweets while the Topic Detection API analyzed the tweets. Once the topics were returned, we queried those stored tweets for the top topics, sent those tweets to Sentiment Analysis to receive per-topic ratings, then deleted the table storing the tweets.

The code created during the hackfest is available on GitHub and may be useful to those interested in analyzing the content and sentiment of social media posts. It may also be of interest to those looking to see examples of using Azure Functions and Azure Table Storage in Node.js. Here is a link to that source code as well as some additional resources that may be helpful for others developing similar solutions.

Ideas on how this prototype could be extended? Questions about the code? Feel free to leave comments below or reach out to the BindexT developers via GitHub.