This code story describes how my team at Microsoft collaborated with Sage to find imaginative solutions for their bot-related challenges. Sage was setting out to develop a large collection of bots that would be offered in a variety of languages, locations, and needs. But in order to build them, they first needed good design and infrastructure.

Sage wanted to develop a platform where they could offer bots in multiple languages and through numerous channels such as Facebook Messenger, Slack, etc.

Prior to our engagement, this partner supported its localization and channel needs by writing multiple copies of the same bot for every language and every channel. Each of these bots needed to be registered and maintained separately.

That’s a lot of code to maintain!

However, we can enable support for multiple channels as part of the registration process by using Microsoft Bot Framework. In this way, we can support publishing a single bot that:

In our solution, the Orchestration Bot (a.k.a. Parent Bot) manages the place in the conversation where the user can decide on general context actions like:

We made use of the following features in Microsoft Bot Framework to help with the technological challenges of creating and maintaining a multilingual, context-switching bot: 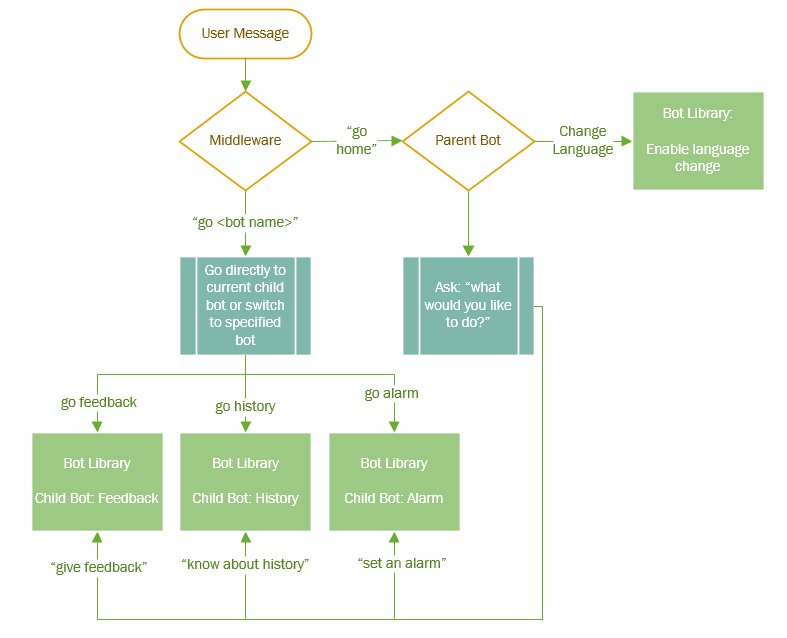 The sections below delve into these specific parts of the solution.

Middleware is implemented in Microsoft Bot Framework as a message interceptor for messages sent to the bot. Our solution uses middleware to intercept all messages and look for special ones like:

This method can be used to intercept messages that should be relevant for all bots.

The following is an example of how to intercept a “go home” message:

Middleware is used in the code to orchestrate exits from and entrances to conversations from anywhere in the application which enables the user to change his or her mind and switch between bots.

The use of libraries helps separate the contexts of the parent bot and child bots and enables different teams to maintain their own code bases.

Libraries is a feature in Microsoft Bot Framework that enables the creation of segregated dialogs and intents that can function as a subcontext for the bot. That is, a child bot orchestrated by the parent bot.

In our scenario, each child bot handles a topic or domain, credit card, history, alarm, or giving feedback. By separating these domains into individual child bots, we enable the team responsible for each one to work independently in their own code base. Each child uses a library to manage the intents for the domain.

Each bot creates and manages a Library object and exposes an intents array. The parent bot will have to perform the following steps to consume the library:

Since we will potentially need to support an extensive collection of bots, we looked for an approach that didn’t require us to declare each bot separately. To apply this method, we require each bot to implement an interface that exposes the following methods:

In addition to the interface we also assume that all bot directories are found under the /bots/ directory, enabling automatic loading:

Creating and starting a bot

To decide which bot we want to activate we offer the user a choice from the collection of loaded bots:

Note: This implementation was chosen for simplicity even though it doesn’t hide the “botness” of the bot application from the user. Another better solution would be to use LUIS to understand which child bot is the appropriate one to process the received message and direct the message to it.

Then we create and launch their chosen bot:

We used the selected locale in the bot name to enable the same bot to be declared and launched in different languages.

To communicate with a user in a way he or she understands, we need to “listen” and “reply” in his or her language. Fortunately, Microsoft Bot Framework has a solid approach for storing and displaying texts in multiple languages.

However, one major gap that is yet to be addressed in the framework is expanding LUIS, a service for intent and entity recognition, to support multiple languages through one model. To do that with Microsoft Bot Framework using Node.js, we needed to take the following requirements into account:

The following are three solutions we used to enable multilingual support.

To communicate with the user in his or her desired language, we begin by offering them a collection of supported languages. If the user already has a supported language in their session.userData, that language is automatically used. Alternatively, if the user requests to “change language” we prompt them to select a new one. This logic is implemented in the parent bot since it is relevant to all parent and child bots in the application.

To set the default language for the Microsoft Bot Framework, we use the following code:

Example of storing a value and retrieving it:

It is also possible to override default Microsoft Bot Framework messages by adding the file /locale/{lang}/BotBuilder.json. Possible values are available on GitHub.

The same method for the root level can also be applied at the library level when adding the locale file under /{bot lib}/locale/{lang}/index.json.

When initializing the library, call the following code:

This code ensures that this directory is added to the available locale. At the time of writing this article, values in such locale files are registered at the global level and override existing values. To add new values, it is advisable to use the format {bot name}:{locale value} or any other similar format.

A bigger challenge on the language front is using LUIS models. It’s one thing to display text for a user in their preferred language, but it’s quite another to understand a user in multiple languages. At the time of writing this article, LUIS does not support multilingual features.

This issue means that several LUIS models have to be trained in order to add multilingual support, including one for each different language. Additionally, building LUIS intent-based dialogs in Microsoft Bot Framework requires the declaration of the model in the instantiation:

Since the flow of dialogs in Microsoft Bot Framework is designed as a stack, you can create dialogs and route a conversation into them in runtime. To ensure that the LUIS model is available when bots are created, each library exposes an initialization method that accepts a locale and returns a collection of intents.

Having an initialization method enables the dynamic creation of the intent using a locale chosen by the user:

Using the user’s locale and dialog id we can route him or her request to the relevant bot.

You could reuse the code presented here in any project involving any bot situations similar to these:

It would also be beneficial to reuse the knowledge gained from this case study when implementing a bot that involves one or more of the following scenarios:

Collecting Form Data with a LUIS-Based Bot
This post outlines the steps of creating a bot that interacts with a user to collect missing LUIS entity data before processing their request.