The Visual C++ Build tools have been a huge success since we introduced them two years ago. The C++ Build Tools were originally released as a standalone installer that only laid down the tools required to build C++ projects without installing the Visual Studio IDE. Many developers have found them useful in environments that don’t require a full VS install such as build servers or CI systems. The tools are always kept up-to-date, shipping only the latest supported version of the MSVC compiler toolset.

You can download the Visual Studio Build Tools today from visualstudio.com. The Build Tools are licensed as a supplement to your existing Visual Studio license so there’s no extra cost to integrate them in your workflow. After the product install finishes you can click the “Launch” button on the VS installer to open a Developer Command Prompt for VS2017 with the v141 MSVC toolset in the path and ready to go. But what about using the v140 toolset?

The Build Tools workload creates a couple of folders containing Developer Command Prompt shortcuts for you on the Start menu. Unfortunately, the ones in the Visual Studio 2015 folder don’t work. We’ll remove these from the setup in a future update of the Build Tools. 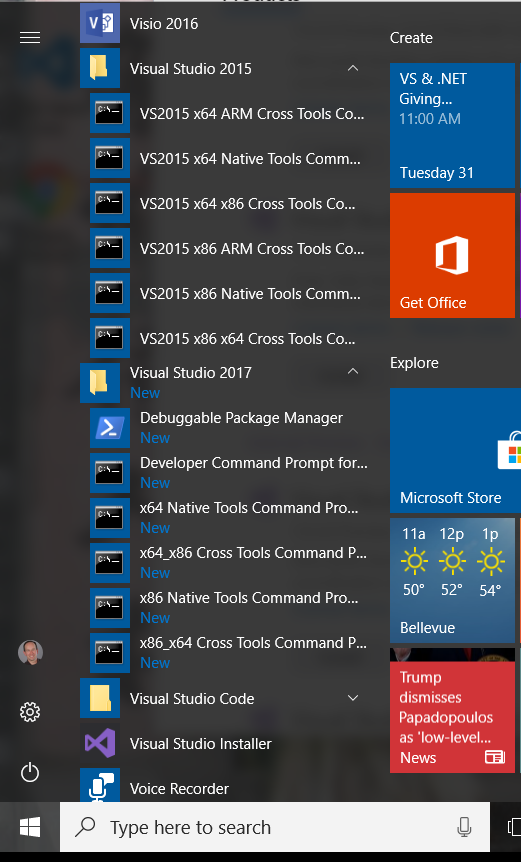 The Visual Studio 2017 command prompts work as expected. You can easily modify them to create command prompts for the VS 2015 v140 MSVC tools. If you go into the folder C:\Program Files (x86)\Microsoft Visual Studio\2017\BuildTools\VC\Auxiliary\Build you’ll find four developer command prompts (named vcvars*.bat). Pick any one and create a copy to edit.

The contents of these files are pretty simple: they all just invoke vcvarsall.bat with the proper architecture parameter. We’ll do the same, but add a new parameter that tells vcvarsall.bat to set up the environment for the v140 toolset: -vcvars_ver=14.0.

Here’s an example of a command to set up the environment for the v140 x86-hosted, x64-targeting tools. Running cl -Bv shows that the environment is set up for the right version of the tools.

Start using the VS2017 Build Tools

Now that the VS2017 Build Tools include the latest MSVC v140 compilers, we’re deprecating the old Visual C++ Build Tools from the VS2015 era. If you still need the v140 tools in your build or CI systems, you should download the Visual Studio Build Tools from visualstudio.com.

Completed UserVoice Suggestions in Visual Studio for C++ developers
If you regularly follow our blog, you may have noticed that our posts encourage you to submit your suggestions on how to improve Visual Studio in UserVoice. We spend a ...