If you have read Jason Zander’s post earlier today, you know that Visual Studio 2012 has been released to the web! Check out the MSDN Subscriber Download Page  and the Visual Studio product website. This release has brought a huge amount of new value for C++ developers. Here are the highlights:

Here is the detailed discussion on C++ 11 features in Visual Studio 2012, with links to the corresponding C++ 11 specs. Please also see the fun video series on STL … by STL.

We’ve made major investments to help developers make the most of their target hardware. We are introducing the auto-vectorizer to take advantage of SSE2 instructions to make your loops go faster by doing 4 number operations at time, auto-parallelizer to automatically spread your work on many CPUs, and C++ AMP (C++ Accelerated Massive Parallelism) to leverage the power of GPU for data parallel algorithms. Note that C++ AMP also comes with a first-class debugging and profiling support.

We continue to enhance the breadth and depth of Parallel Patterns Libraries (PPL). In addition to major investments in async programming, we’ve added more to algorithms and concurrent collections. We are also working very hard in bringing most of these concepts into the next revision of the C++ standard.

In addition to the Parallel Tasks window and Parallel Stacks window, Visual Studio 2012 offers a new Parallel Watch window so that you can examine the values of an expression across all threads and processes, and perform sorting and filtering on the results.

Note: XAML/DirectX interop :Developers targeting Windows 8 Store apps can use both XAML and DirectX in the same app, which allows developers to build flexible user interfaces like the one in FreshPaint app.

Static code analysis helps identify runtime issues at compile time when they are much cheaper to fix. Code analysis for C++ feature in Visual Studio 2012 has been enhanced aiming to provide improved user experiences as well as analysis capabilities. In this new version, code analysis has been extended to support 64 bit apps, ship with additional concurrency rules to detect issues like race conditions, and offer the ability for creating customized rule sets. This feature is now available in all Visual Studio editions allowing every developer to make the best use of it.

Generate dependency graphs from source code to better understand the architecture of your existing apps or code written by others. In Visual Studio 2012 you can generate dependency graphs by binaries, classes, namespaces, and include files for C++ apps. Also, use Architecture Explorer tool window to explore the assets and structure of your solution by looking at solution view or class view.

Example: Dependency Graph by Include Files

Use Architecture Explorer to browse assets in the solution

Visual Studio 2012 ships with a new unit test framework for native C++. You can write light-weight unit tests for your C++ applications to quickly verify application behaviors. Use the new Test Explorer tool window to discover and manage your tests along with test results. This feature is now available in all Visual Studio editions.

Code coverage has been updated to dynamically instrument binaries at runtime. This lowers the configuration overhead, provides better performance and enables a smoother user experience. Code coverage feature has also been integrated well with the new C++ unit test framework in Visual Studio 2012 allowing you to collect code-coverage data from unit tests for C++ app by one single click within Visual Studio IDE.

We’ve announced two things that will arrive in a few months:

As soon as the Windows Phone 8 SDK is made available, C++ developers will be able to target Windows Phone. Stay Tuned! 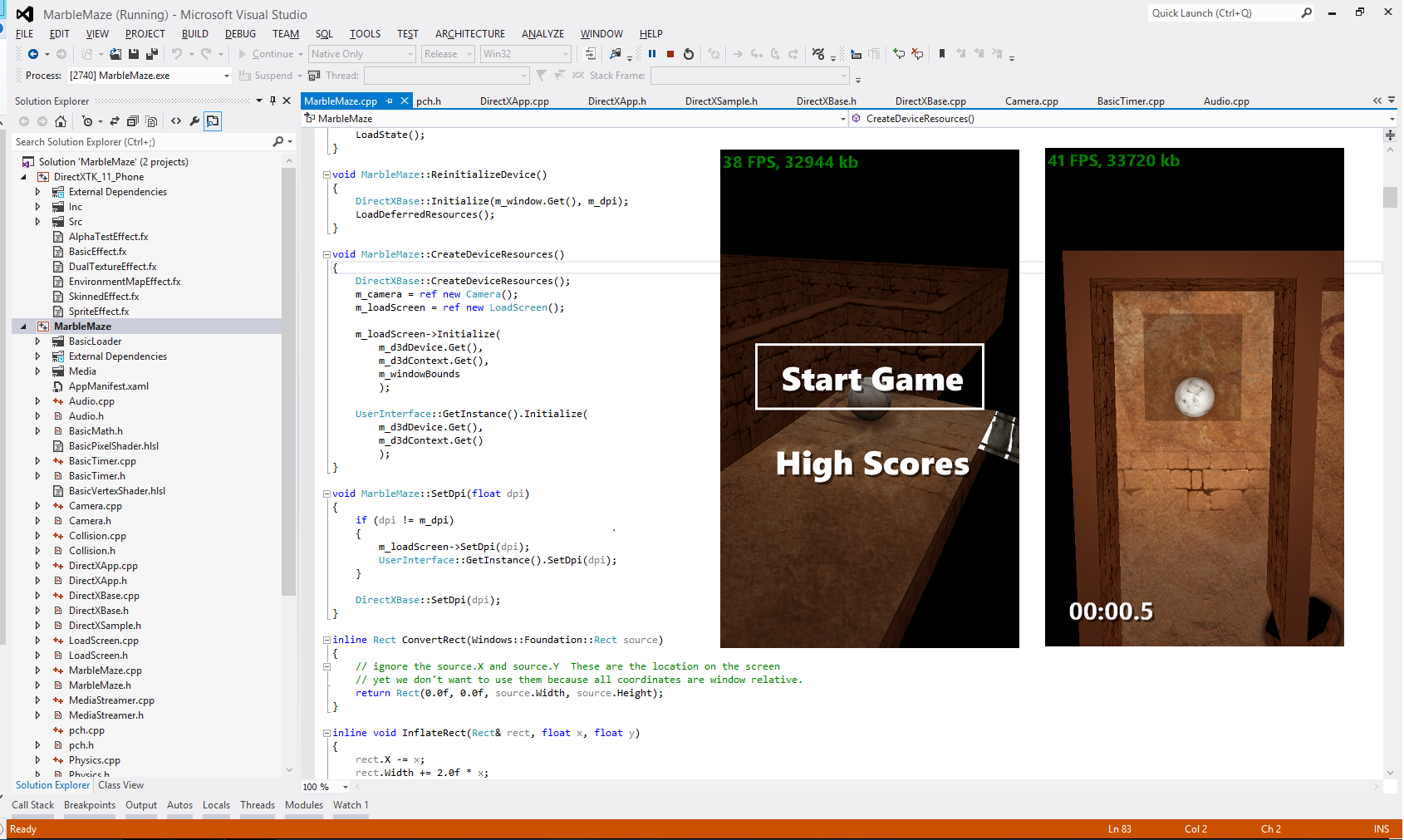 As always, we love hearing from you. Thanks for keeping us honest and kudos to those who have influenced our product design for the better!

On behalf of the VC++ team,

Connecting C++ and XAML
Hi, I’m Andy Rich, a tester on the C++ frontend compiler and one of the primary testers of the C++/CX language extensions.  If you’re like me, making use...