Visual Studio 2017 Update 15.5 Preview 1 brings you a number of productivity and performance improvements that will save you time as a C++ developer. For this release, we brought two features from the Productivity Power Tools extension inside the product: the Structure Visualizer, and Ctrl + Click to Go To Definition. In addition, we significantly improved the performance of several code navigation and refactoring operations.

The Structure Visualizer enables you to tell, at a glance, how your code is structured, and how it is nested. You’ll quickly see it in action via the dotted guidelines in the editor window that organize each logical block of code. Hovering over the lines gives you an idea of the hierarchical layout of the code up to the point where your cursor is located.

One limitation to note: while the original Structure Visualizer extension provided a further change to the scroll bar in the editor window, this in-product version does not.

The second change is the ability to Ctrl + Click a code symbol in the editor window to quickly jump to its definition, rather than having to press F12 or right-clicking and choosing the option from the context menu.

You can change the behavior of these features or disable them altogether by going to Tools > Options > Text Editor. 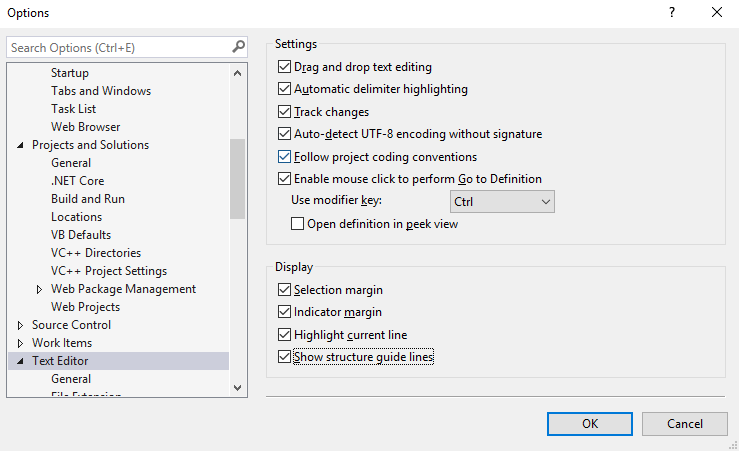 To disable Ctrl + Click to Go to Definition and revert back to the previous behavior to select the symbol, just uncheck the “Enable mouse click to perform Go to Definition” checkbox. Alternatively, you can change which modifier key you use with the click to Alt or Ctrl + Alt, or choose to have the action perform Peek Definition instead of Go to Definition, which keeps your current editor window open and displays an inline pop-up with the location of the definition. You can enable or disable the structure guidelines using the “Show structure guide lines” checkbox.

We know Visual Studio performance is another aspect that affects developer productivity, and we’re always working on making it better. This time around, we concentrated our efforts on several IDE operations that use the IntelliSense engine for code navigation and refactoring. The following features have significant performance improvements in 15.5 Preview 1:

For a visualization of some of the improvements, here is a test run on the Chromium solution (3500 projects):

Most of you are on the Release channel of the Visual Studio installer, which ensures you get updates after they are no longer in a preview state. To get the latest, cutting-edge preview updates, including 15.5 Preview 1, which comes with everything mentioned in this blog post, subscribe to the Preview channel. You can install a preview build of Visual Studio 2017 side-by-side with a release build, so you can play with the latest bits without disrupting your existing workflow. We appreciate all feedback so we can make Visual Studio better with each release. Please send us any bug reports or suggestions via the Help > Send Feedback menu in the product.