Learn C++ Concepts with Visual Studio and the WSL

Concepts promise to fundamentally change how we write templated C++ code. Theyâ€™re in a Technical Specification (TS) right now, but, like Coroutines, Modules, and Ranges, itâ€™s good to get a head start on learning these important features before they make it into the C++ Standard. You can already use Visual Studio 2017 for Coroutines, Modules, and Ranges through a fork of Range-v3. Now you can also learn Concepts in Visual Studio 2017 by targeting the Windows Subsystem for Linux (WSL). Read on to find out how!

Concepts enable adding requirements to a set of template parameters, essentially creating a kind of interface. The C++ community has been waiting years for this feature to make it into the standard. If youâ€™re interested in the history, Bjarne Stroustrup has written a bit of background about concepts in a recent paper about designing good concepts. If youâ€™re just interested in knowing how to use the feature, see Constraints and concepts on cppreference.com. If you want all the details about concepts you can read the Concepts Technical Specification (TS).

Concepts are currently only available in GCC 6+. Concepts are not yet supported by the Microsoft C++ Compiler (MSVC) or Clang. We plan to implement the Concepts TS in MSVC but our focus is on finishing our existing standards conformance work and implementing features that have already been voted into the C++17 draft standard.

We can use concepts in Visual Studio 2017 by targeting the Linux shell running under WSL. Thereâ€™s no IDE support for conceptsâ€“thus, no IntelliSense or other productivity features that require the compilerâ€“but itâ€™s nice to be able to learn Concepts in the same familiar environment you use day to day.

First we have to update the GCC compiler. The version included in WSL is currently 4.8.4â€“thatâ€™s too old to support concepts. There are two ways to accomplish that: installing a Personal Package Archive (PPA) or building GCC-6 from source.

But before you install GCC-6 you should configure your Visual Studio 2017 install to target WSL. See this recent VCBlog post for details: Targeting the Windows Subsystem for Linux from Visual Studio. Youâ€™ll need a working setup of VS targeting Linux for the following steps. Plus, itâ€™s always good to conquer problems in smaller pieces so you have an easier time figuring out what happened if things go wrong.

You have two options for installing GCC-6: installing from a PPA or building GCC from source.

Using a PPA to install GCC

A PPA allows developers to distribute programs directly to users of apt. Installing a PPA tells your copy of apt that thereâ€™s another place it can find software. To get the newest version of GCC, install the Toolchain Test PPA, update your apt to find the new install locations, then install g++-6.

The PPA installs GCC as a non-default compiler. Running g++ --version shows version 4.8.4. You can invoke GCC by calling g++-6 instead of g++. If GCC 6 isnâ€™t your default compiler youâ€™ll need to change the remote compiler that VS calls in your Linux project (see below.)

Another option is to build GCC 6.3 from source. There are a few steps, but itâ€™s a straightforward process.

Trying out Concepts in VS

Now that youâ€™ve updated GCC youâ€™re ready to try out concepts! Letâ€™s restart the SSH service again (in case you exited all your bash instances while working through this walkthrough) and weâ€™re ready to learn concepts!

Create a new Linux project in VS: 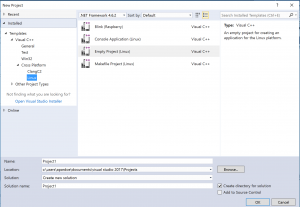 Add a C++ source file, and add some code that uses concepts. Hereâ€™s a simple concept that compiles and executes properly. This example is trivial, as the compile would fail for any argument i that doesnâ€™t define operator==, but it demonstrates that concepts are working.

Youâ€™ll also need to enable concepts on the GCC command line. Go to the project properties, and in the C++ > Command Line box add the compiler option -fconcepts. 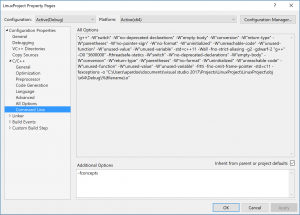 If GCC 6 isnâ€™t the default compiler in your environment youâ€™ll want to tell VS where to find your compiler. You can do that in the project properties under C++ > General > C++ compiler by typing in the compiler name or even a full path: 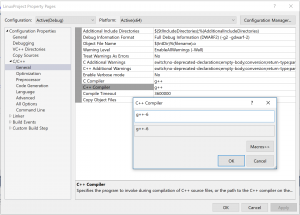 Now compile the program and set a breakpoint at the end of main. Open the Linux Console so you can see the output (Debug > Linux Console). Hit F5 and watch concepts working inside of VS! 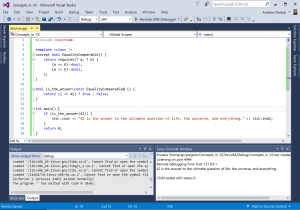 Now we can use Concepts, Coroutines, Modules, and Ranges all from inside the same Visual Studio IDE!

The example above shows that concepts compile properly but it doesnâ€™t really do anything. Hereâ€™s a more motivating example from Casey Carter that uses a type trait to show concept dispatch. This is a really great example to work through to illustrate the mechanics of constraints.

As always, we welcome your feedback. Feel free to send any comments through e-mail at visualcpp@microsoft.com, through Twitter @visualc, or Facebook at Microsoft Visual Cpp.

If you encounter other problems with Visual C++ in VS 2017 please let us know via the Report a Problem option, either from the installer or the Visual Studio IDE itself. For suggestions, let us know through UserVoice. Thank you!

Marian Luparu [MSFT] February 27, 2017
1 comment
Always Set Impossible Goals
Impossible goals are like dreams, we always pursue them, with the hopes they will come true. In one of my recent experiences, I managed a feature crew, C++ Fast Project ...