The content of this blog was provided by Gautham Beeraka from Intel Corporation.

Intel recently announced Jump Conditional Code (JCC) Erratum which can occur in some of its processors. The MSVC team has been working with Intel to provide a software fix in the compiler to mitigate the performance impact of the microcode update that prevents the erratum.

There are three things one should know about JCC erratum:

Each of these topics are explained below.

Applying a microcode update (MCU) can prevent JCC erratum. The MCU works by preventing the jump instructions that overlay or end on 32-byte boundary as shown in the figure below from being cached in the decoded uop cache. The MCU affects conditional jumps, macro-fused conditional jumps, direct unconditional jump, indirect jump, direct/indirect call and return. 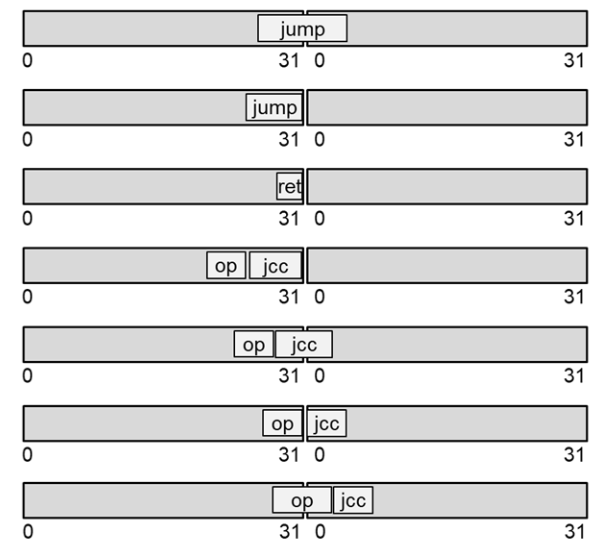 The MCU will be distributed through Windows Update. We will update this blog once we have more information on the Windows Update. Note that the MCU is not specific to Windows and applies to other operating systems also.

Applying the MCU can regress performance of software running on the patched machines. Based on our measurements, we see an impact between 0-3%. The impact was higher on a few outlier microbenchmarks.

To mitigate the performance impact, developers can build their code with the software fix enabled by /QIntel-jcc-erratum switch in MSVC compiler. We observed that the performance regressions become negligible after rebuilding with this fix. The switch can increase code size which was about 3% based on our measurements.

How to enable the software mitigation? A few undocumented compiler flags are also available to restrict the scope of the software mitigation as shown below. These flags can be useful to experiment with, but we are not committed to service them in future releases.

To enable these flags, add them to the “Additional Options” under the “Command Line” section of the project Property Pages: 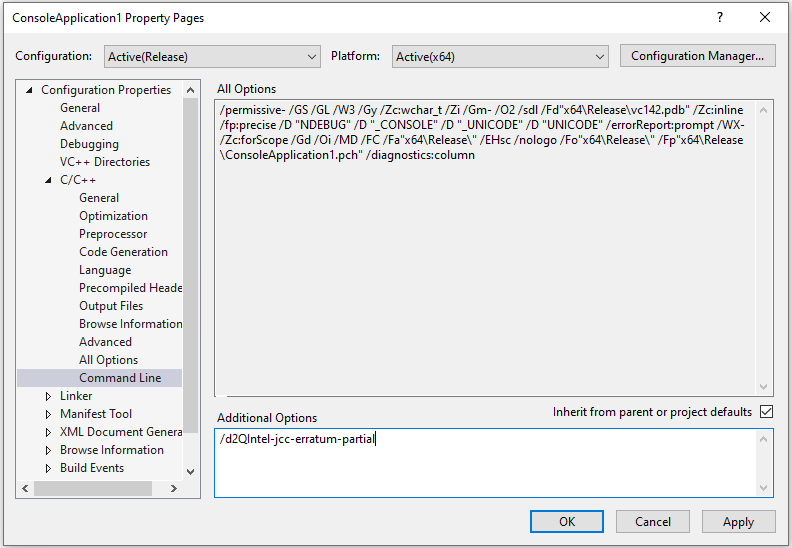 All these switches work only in release builds and are incompatible with /clr switches. In the event multiple /d2QIntel-jcc-erratum* switches have been given, full processing (all branches) is favored over partial (loop branches only) processing. If any of the switches specifies a functions file, the processing is limited to just those functions.

What does the software mitigation do?

The software mitigation in the compiler detects all affected jumps in the code (the jumps that overlay or end at 32-byte boundary) and aligns them to start at this boundary. This is done by adding benign segment override prefixes to the instructions before the jump. The size of the resultant instructions increases but is less than 15 bytes. In situations where prefixes cannot be added, NOPs are used. The example below shows how the compiler generates code when the mitigation is on and off.

What is the performance story?

We did evaluate the performance impact of the MCU and fix in the MSVC compiler. The numbers stated below use the following test PC configuration.

Operating System – Private build of Windows with the MCU applicable to this processor.

Based on our measurements, we see regressions ranging from 0-3% after applying the MCU. We also saw regressions going up to 10% on some outlier microbenchmarks.

Applying the software mitigation through the /QIntel-jcc-erratum switch in MSVC compiler makes the regressions negligible. This switch applies the mitigation globally to all modules built with it and increases code size. We measured an average of 3% code size bloat.

If your software can run on the machines with processors affected by the JCC erratum and versions of Windows with the MCU, we encourage you to profile your code and check for performance regressions. You can use Windows Performance Toolkit or Intel® VTune ™ Profiler to profile your code. You can detect if the MCU is affecting performance by following steps in Intel’s white paper. If you are affected, recompile with /QIntel-jcc-erratum or other switches listed above to mitigate the effects.

Your feedback is key to deliver the best experience. If you have any questions, please feel free to ask us below. You can also send us your comments through e-mail. If you encounter problems with the experience or have suggestions for improvement, please Report A Problem or reach out via Developer Community. You can also find us on Twitter @VisualC.

Code Navigation for CMake Scripts
Visual Studio 2019 16.5 Preview 2 makes it easy to make sense of complex CMake projects. Code navigation features such as Go To Definition and Find All References are now...

Will Buik
February 6, 2020
1 comment
Easily Add, Remove, and Rename Files and Targets in CMake Projects
It’s easier than ever to work with CMake projects in Visual Studio 2019 16.5 Preview 2. Now you can add, remove, and rename source files and targets in your CMake ...