A huge throughput improvement was done in the linker! Check our recent blogpost on Improved Linker Fundamentals in Visual Studio 2019.

A comprehensive list of new and improved C++ compiler optimizations can be found in a recent blogpost on MSVC Backend Updates in Visual Studio 2019 version 16.2. I’ll talk in a bit more detail about some of them.

All samples below are compiled for x64 with these switches: /arch:AVX2 /O2 /fp:fast /c /Fa.

This is a common pattern for making sure that two vectors didn’t diverge too much:

For version 16.2 we tweaked the vectorization heuristics for the AVX architecture to better utilize the hardware capabilities. The disassembly is for x64, AVX2, old code on the left, new on the right:

Recognition of intrinsics working on a single vector element

The compiler now does a better job at optimizing vector intrinsics working on the lowest single element (those with ss/sd suffix).

A good example for the improved code is the inverse square root. This function is taken from the Unreal Engine math library (with comments removed for brevity). It’s used all over the games based on Unreal Engine for rendering objects:

Visual Studio 2019 version 16.0 generated code for all intrinsics one by one. Version 16.2 now understands the meaning of the intrinsics better and is able to combine multiply/add intrinsics into FMA instructions. There are still improvements to be made in this area and some are targeted for version 16.3/16.4.

Even now, if given a const argument, this code will be completely constant-folded:

Again, Visual Studio 2019 version 16.0 here generated code for all intrinsics, one by one. Version 16.2 was able to calculate the value at compile time. (This is done with /fp:fast switch only).

It also does more FMA simplifications:

Previously FMA generation worked only with local vectors. It was improved to work on globals too.

Here is an example of the optimization at work:

Old code on the left, new on the right:

FMA is shorter and faster, and the constant is completely gone and will not occupy space.

Old code on the left, new on the right:

Version 16.2 is doing this simplification:

Constants are now extracted and multiplied at compile time.

Memset code generation was improved by calling the faster CRT version where appropriate instead of expanding its definition inline. Loops that store a constant value that is formed of the same byte (e.g. 0xABABABAB) now also use the CRT version of memset. Compared with naïve code generation, calling memset is at least 2x faster on SSE2, and even faster on AVX2.

We’ve done more tweaks to the inlining heuristics. They were modified to do more aggressive inlining of small functions containing control flow.

The new optimizations pay off.

We ran the Infiltrator Demo again (see the blogpost about C++ game development in Visual Studio 2019 for a description of the demo and testing methodology). Short reminder: Infiltrator Demo is based on Unreal Engine and is a nice approximation of a real game. Game performance is measured here by frame time: the smaller, the better (opposite metric would be frames per second). Testing was done similarly to the previous test run, the only difference is the new hardware: this time we ran it on AMD Zen 2 newest processor.

This time we measured only /arch:AVX2 configuration. As previously, the lower the better. 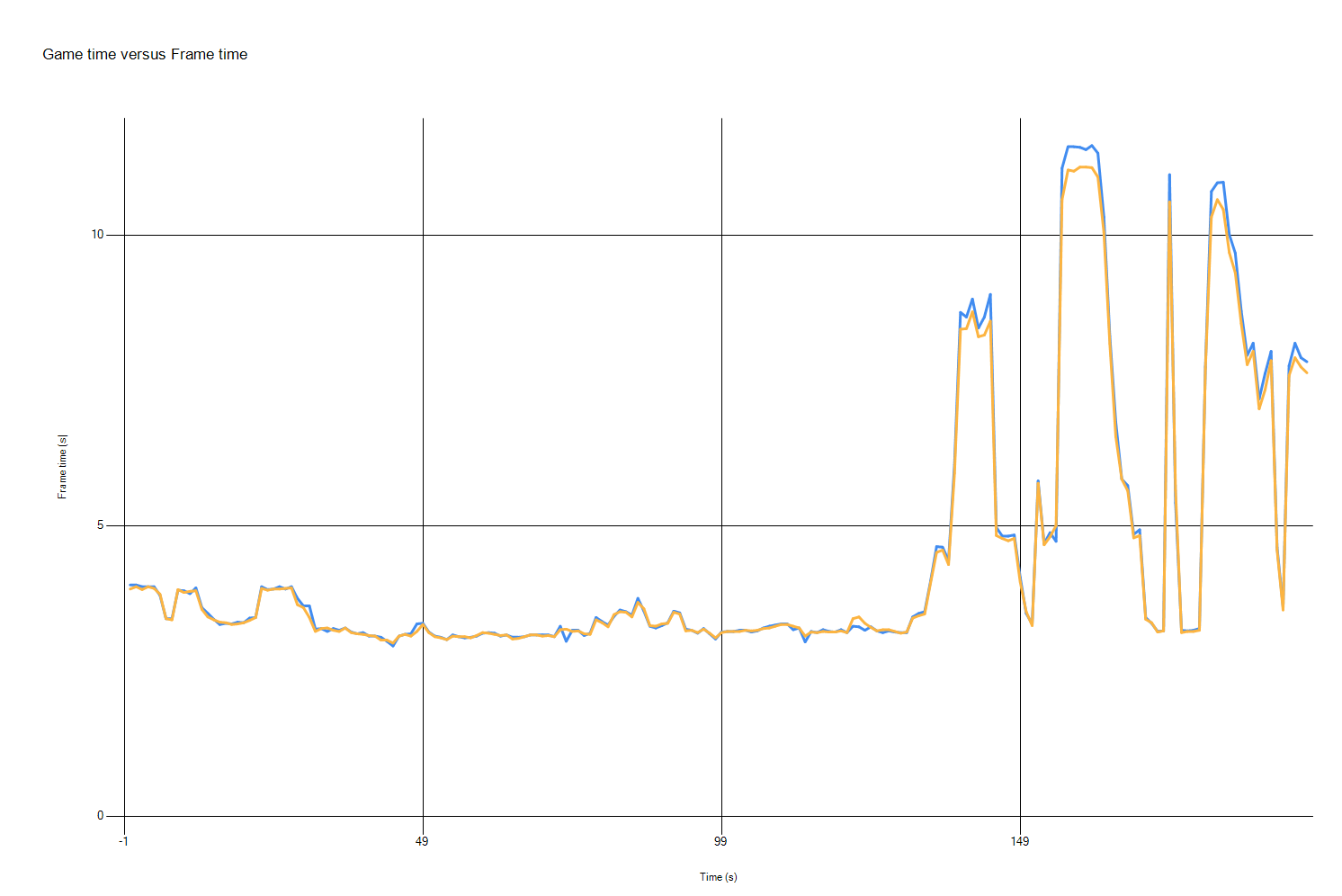 Frame times are mostly the same between the two runs, but in the parts of the demo where frame times are the highest (and thus the frame rate is lowest) with Visual Studio 2019 version 16.2 we’ve got an improvement of 2–3%.

We’d love for you to download Visual Studio 2019 and give it a try. As always, we welcome your feedback. We can be reached via the comments below or via email (visualcpp@microsoft.com). If you encounter problems with Visual Studio or MSVC, or have a suggestion for us, please let us know through Help > Send Feedback > Report A Problem / Provide a Suggestion in the product, or via Developer Community. You can also find us on Twitter (@VisualC).