Visual Studio 2019 version 16.2 Preview 3 includes built-in Clang/LLVM support for MSBuild projects. In our last release, we announced support for Clang/LLVM for CMake. In the latest Preview of Visual Studio, we have extended that support to also include MSBuild projects. While in most cases we recommend using the MSVC compiler, we are committed to making Visual Studio one of the most comprehensive IDEs on Windows. You may want to use Clang instead if you are developing cross platform code, especially if it already depends on Clang or GCC extensions. You can now use Clang/LLVM to target both Windows and Linux using MSBuild just like you can with CMake projects. We’ve also updated our included version of Clang to 8.0.0. Please download the latest Preview to try it out and let us know how it works.

You can install the Clang tools for Windows by selecting “C++ Clang Tools for Windows” as part of the “Desktop development with C++” workload. It is not installed by default, but if you have installed it before, Clang will automatically be updated to 8.0.0 when you install the latest Preview. 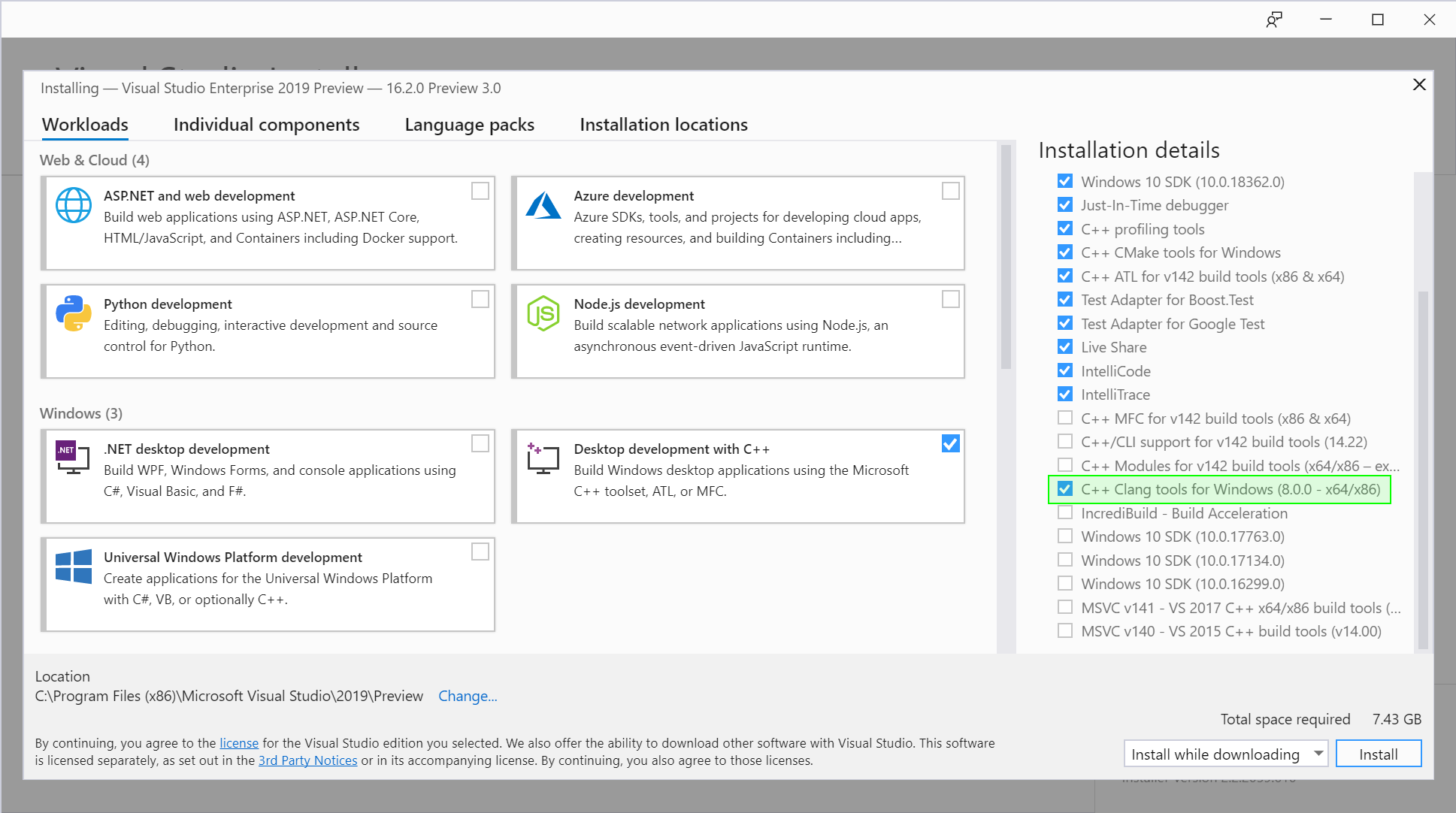 If you want to use your own Clang compiler with Windows instead of the bundled one, you can do that too. Navigate to “Individual Components” and select “C++ Clang-cl for v142 build tools.” You will only be able to use recent versions of Clang (8.0.0 or later) with the Microsoft STL though. We strongly recommend using the bundled compiler as it will be kept up to date as the STL is updated. 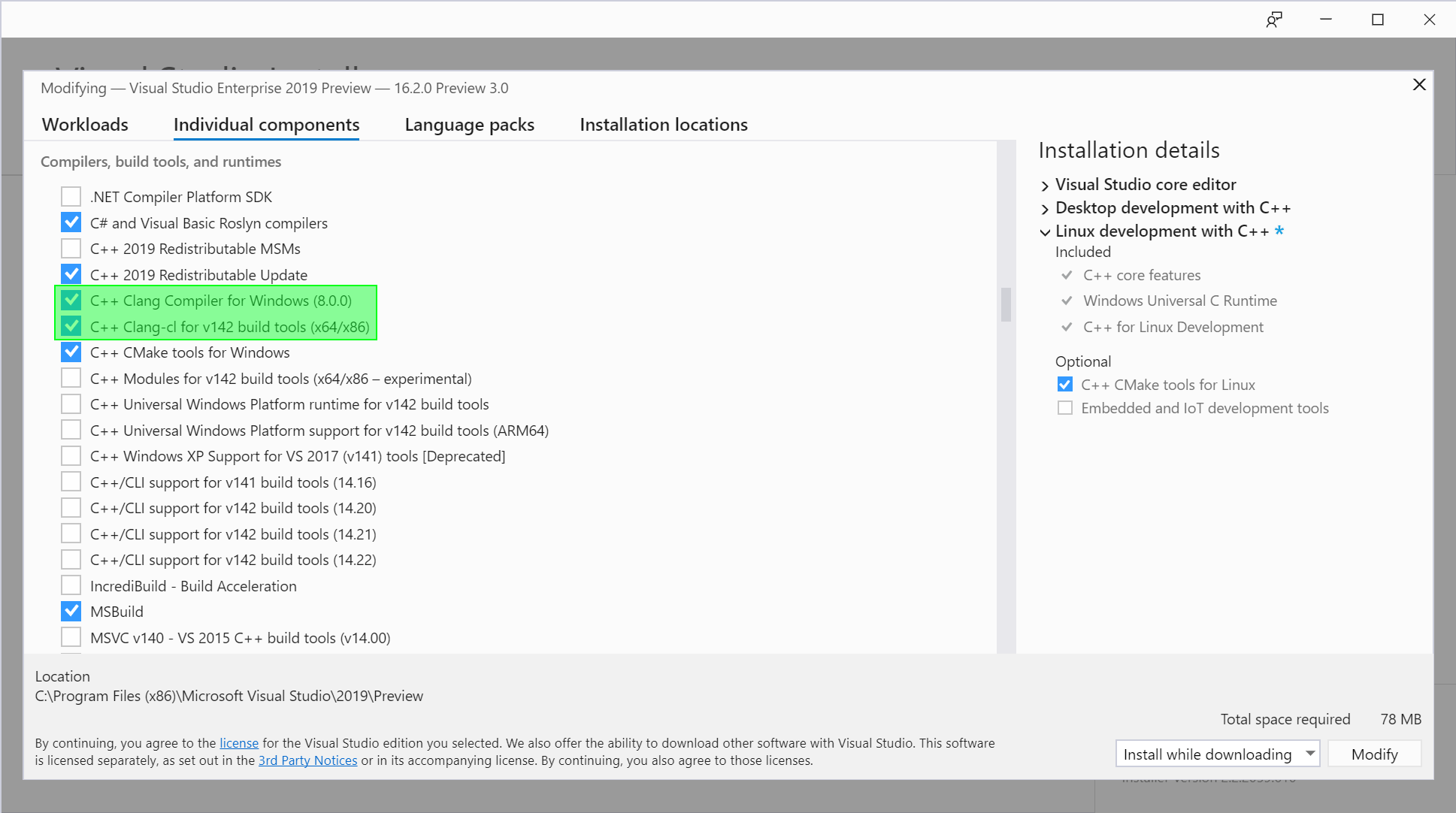 To use Clang with Linux projects, just install the “Linux development” workload. You won’t need to select any more components. The remote machine or WSL will need to have Clang installed. Just install Clang from your distribution’s package manager or from LLVM’s download page.

Use Clang with Windows MSBuild Projects

You can use Clang with most MSBuild projects that target Windows. To get started, create a new C++ project or open an existing one. Then, you can change the platform toolset to “LLVM (clang-cl)”: 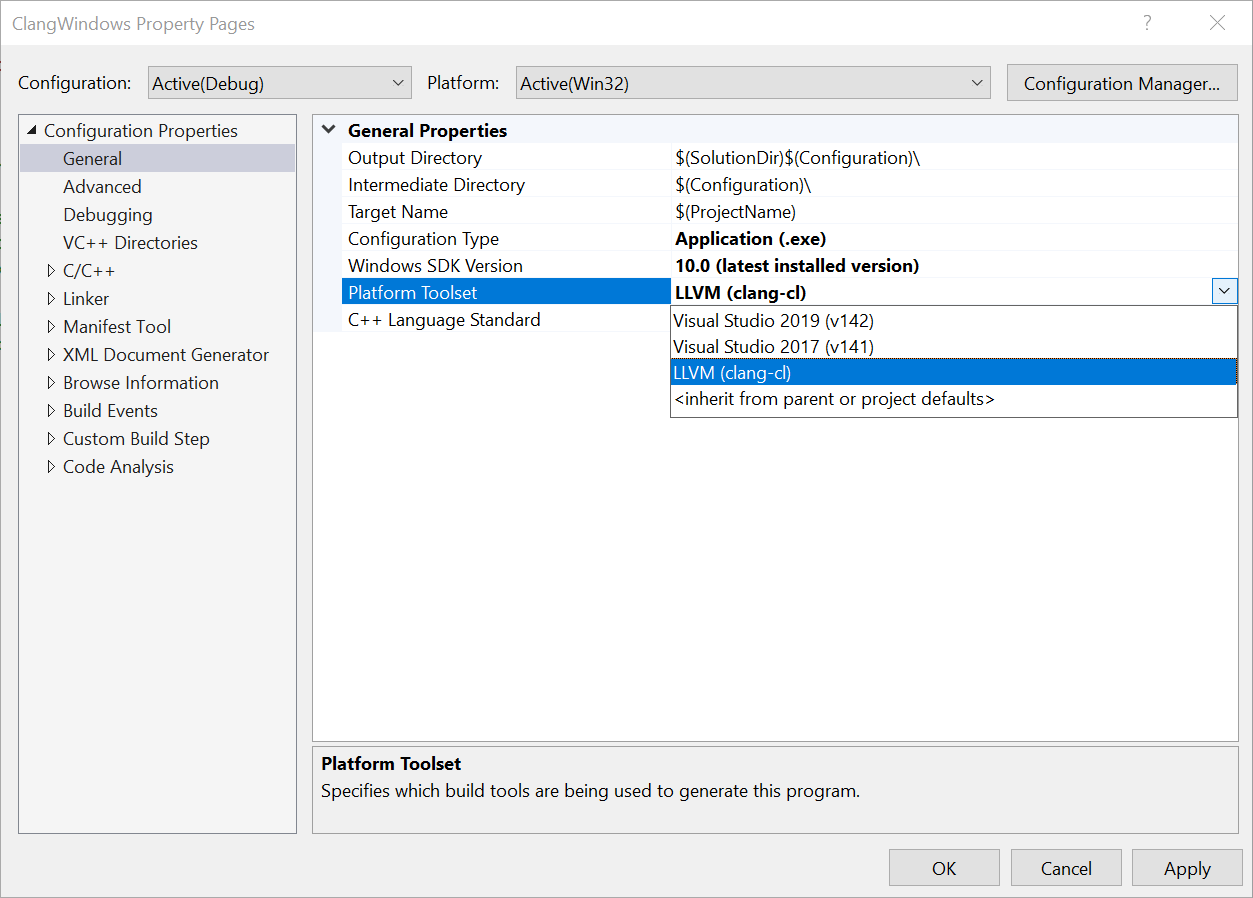 If this toolset doesn’t appear, it likely isn’t installed – see above for installation instructions.

Visual Studio uses the clang-cl frontend with MSBuild on Windows so the properties for Clang will be the same as MSVC based projects. Some compiler options are not supported by clang-cl (e.g. Just My Code) and will be not be shown in the Property Pages when you are using Clang.

Use Clang with Linux MSBuild Projects For Linux projects, Visual Studio uses the Clang GCC-compatible frontend. The project properties and nearly all compiler flags are identical.

To do this, you will need to unload your project and edit it. You can add this to any project configurations that you would like to use your custom installation of Clang. Keep in mind, the Microsoft STL is only compatible with very recent versions of Clang: 8.0.0 as of this post.

Your feedback is a critical part of ensuring that we can deliver the best experience.  We would love to know how Visual Studio 2019 version 16.2 Preview 3 is working for you. If you find any issues or have a suggestion, the best way to reach out to us is to Report a Problem.

Tara Raj
July 19, 2019
4 comments
Inlining Decisions in Visual Studio
Introduction My name is Terry Mahaffey and I work on the code generation team in MSVC. Lately I’ve been doing some work on our inliner and I wanted to give a brief ...