AddressSanitizer (ASan) for Windows with MSVC

⌚ This post was last updated on March 24th, 2021 with the latest information on ASan support.

Note: This feature is now generally available. To get started, take a look at the official AddressSanitizer for Windows with MSVC documentation. Many experience improvements have been made since this blog post was published, and our docs have the latest information.

We are pleased to announce AddressSanitizer (ASan) support for the MSVC toolset. ASan is a fast memory error detector that can find runtime memory issues such as use-after-free and perform out of bounds checks. Support for sanitizers has been one of our more popular suggestions on Developer Community, and we can now say that we have an experience for ASan on Windows, in addition to our existing support for Linux projects.

At Microsoft, we believe that developers should be able to use the tools of their choice, and we are glad to collaborate with the LLVM team to introduce more of their tooling into Visual Studio. In the past, we also incorporated tools like clang-format, and most recently, clang-tidy. MSVC support for ASan is available in our second Preview release of Visual Studio 2019 version 16.4.

To bring ASan to Windows and MSVC, we made the following changes:

When you’re debugging your ASan-instrumented binary in Visual Studio, the IDE Exception Helper will be displayed when an issue is encountered, and program execution will stop. You can also view detailed ASan logging information in the Output window. 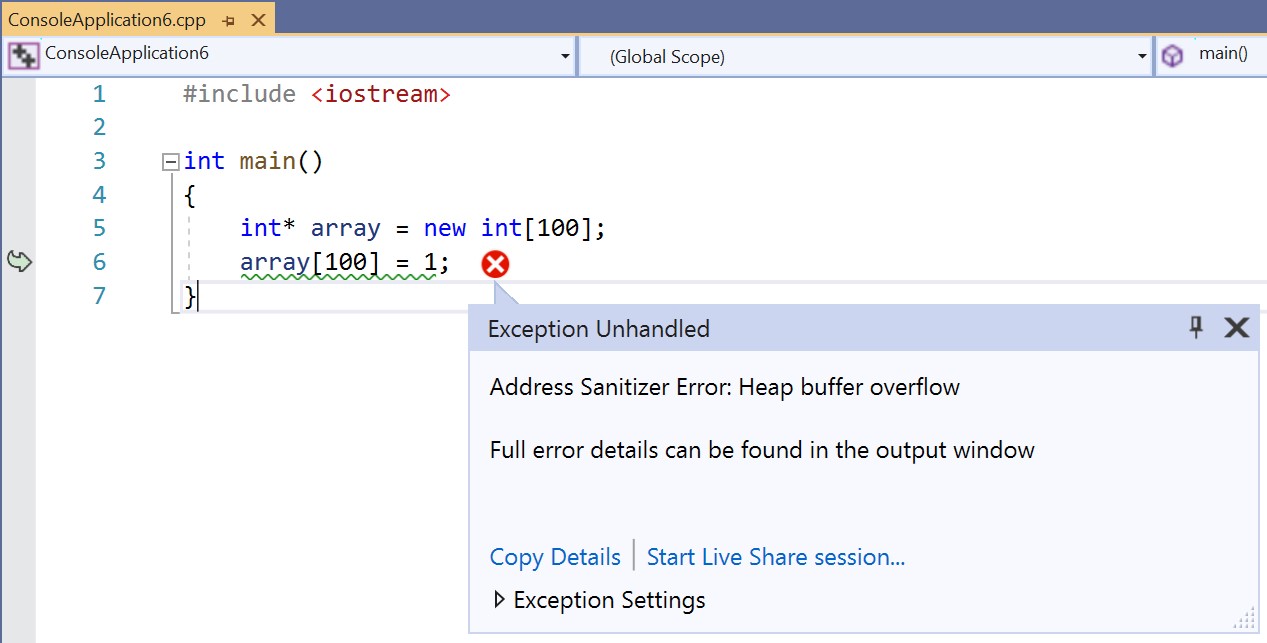 ASan is included with the C++ Desktop workload by default for new installations. However, if you are upgrading from an older version of Visual Studio 2019, you will need to enable ASan support in the Installer after the upgrade: 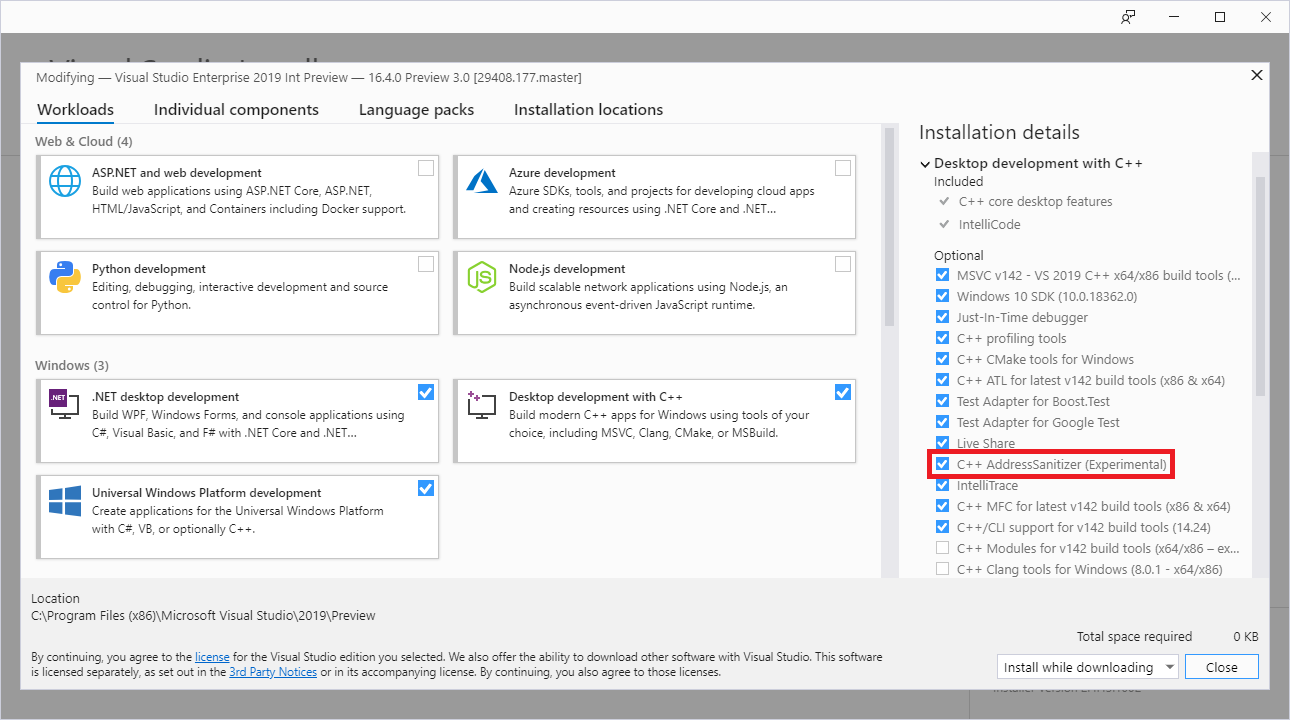 Note: if you run Visual Studio on the new update but have not installed ASan, you will get the following error when you run your code:

You can turn on ASan for an MSBuild project by right-clicking on the project in Solution Explorer, choosing Properties, navigating under C/C++ > General, and changing the Enable Address Sanitizer (Experimental) option. The same approach can be used to enable ASan for MSBuild Linux projects. 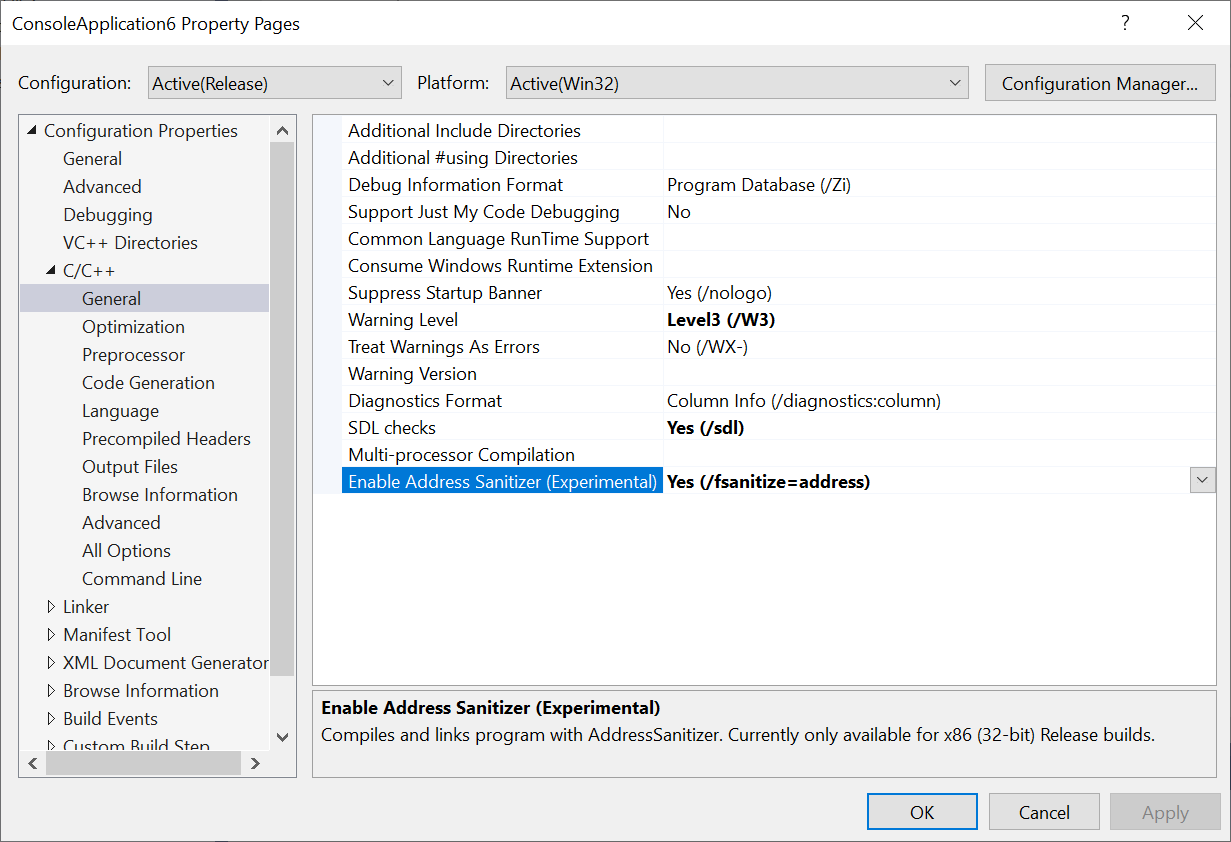 Note: Right now, this will only work for x86 Release targets, though we will be expanding to more architectures in the future.

To enable ASan for CMake projects targeting Windows, do the following:

You may get a green squiggle under the line above with the following warning: Property name is not allowed by the schema. This is a bug that will be fixed shortly – the property will in fact work.

Here is an image of the relevant section of the CMakeSettings.json file after the change: 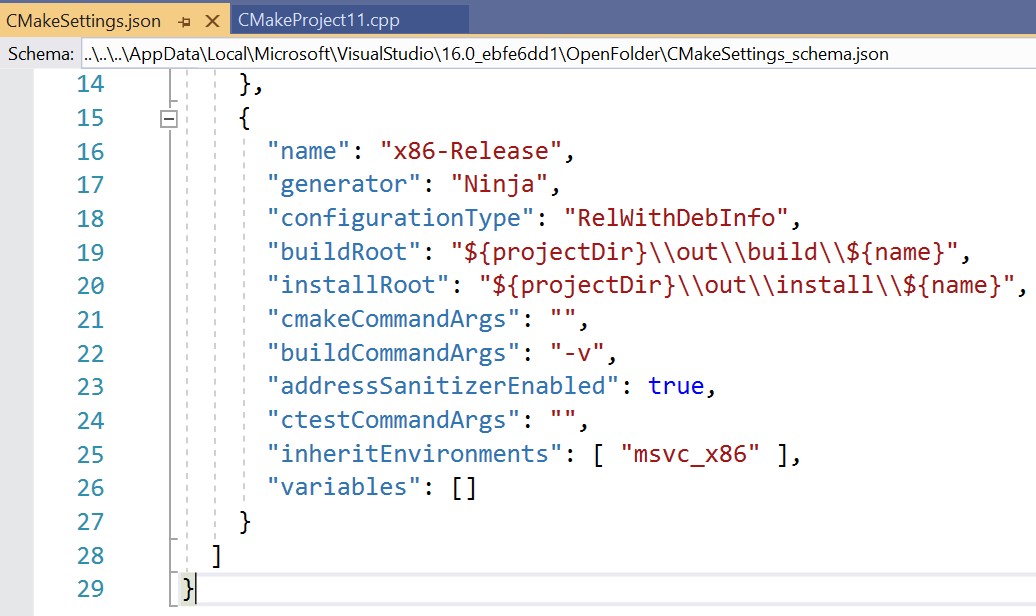 We will further simplify the process for enabling ASan in CMake projects in a future update.

To enable a great Windows experience, we decided to contribute to the LLVM compiler-rt project and reuse their runtime in our implementation of ASan. Our contributions to the ASan project include bug fixes and improved interception for HeapAlloc , RtlAllocateHeap , GlobalAlloc , and LocalAlloc , along with their corresponding Free , ReAllocate , and Size functions. Anyone can enable these features by adding the following to the ASAN_OPTIONS environment variable for either Clang or MSVC on Windows:

Additional options can be added with a colon at the end of the line above.

Changes to MSVC to enable ASan

This means that programs compiled with MSVC + ASan also have the appropriate clang_rt.asan library linked for their target. Each library has a specific use case and linking can be complicated if your program is complex.

Compiling with ASan from the console

If you are on Visual Studio version 16.9 Preview 3 or later, if thefsanitize=address compiler flag is specified, ASan libraries are automatically linked (both for console and IDE builds).

For console compilation, if you are on Visual Studio version 16.9 Preview 2 or earlier, you will have to link the ASan libraries manually. Here are the libraries required for an x86 target:

Once you have selected the correct ASan runtime to use, you should add /wholearchive:<library to link> to your link line and add the appropriate library to your executables. The clang_rt.asan_dynamic_i386.dll is not installed into System32, so when running you should make sure it is available in your environment’s search path.

The ASan runtime libraries patch memory management functions at run-time and redirect executions to an ASan wrapper function which manages the shadow memory. This can be unstable if the runtime environment differs from what the libraries have been written to expect. Please submit any compile or run time errors which you encounter while using ASan via the feedback channels below!

Note: Loading ASan-instrumented DLLs with an non-ASan-instrumented EXE without linking the clang_rt.asan_dynamic and clang_rt.asan_dynamic­_runtime_thunk library will result in false positive ASan reports. This is due to allocations being created in-between program initialization and whenever the ASan instrumented DLL is loaded. Any allocations which are created during this window will result in an erroneous bug report when they are passed into the newly intercepted CRT functions. These false positive reports are avoidable if you link the dynamic import libraries into the main executable; since linking the dynamic runtime libraries in this manner allows the interceptors to initialize at the proper time. Be sure to use the /wholearchive linker flag to ensure asan’s init routines are not optimized away in the main exe.

Your feedback is key for us to deliver the best experience running ASan in Visual Studio. We’d love for you to try out the latest Preview version of Visual Studio 2019 version 16.4 and let us know how it’s working for you, either in the comments below or via email. If you encounter problems with the experience or have suggestions for improvement, please Report A Problem or reach out via Developer Community. You can also find us on Twitter @VisualC.