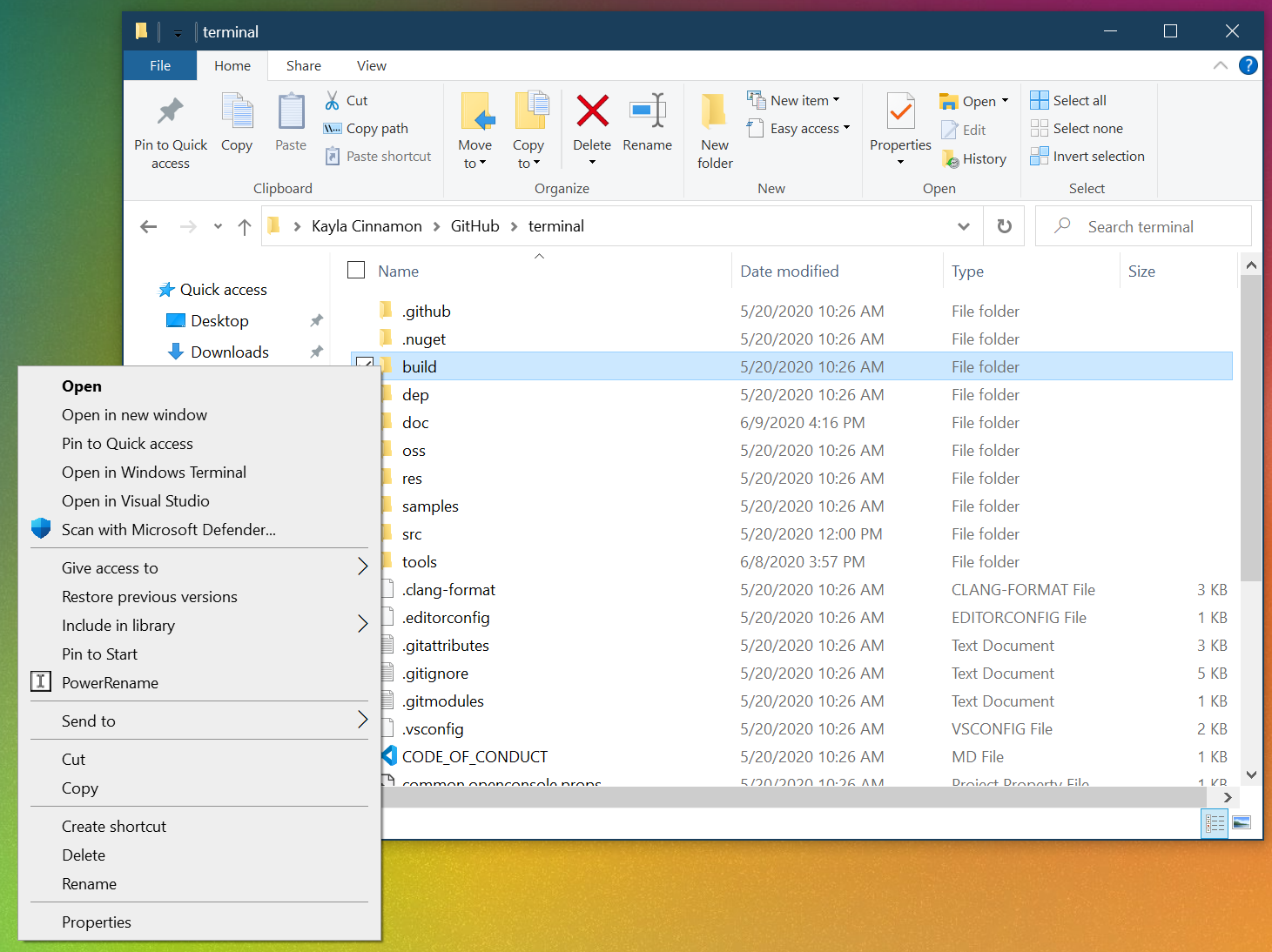 👉 Note: This will launch Windows Terminal Preview until this feature moves into Windows Terminal in July 2020. Additionally, there are still some known bugs that we are working on, including right-clicking in the directory “background” will not give you the Open in Windows Terminal option.

A new setting has been added by jelster that allows you to set Windows Terminal to launch when starting up your machine! You can set startOnUserLogin to true in your global settings to enable this functionality.

👉 Note: If the Windows Terminal startup task entry is disabled either by organization policy or by user action, this setting will have no effect. 🌟 Pictured here is a sneak peek of the light version of Cascadia Code. Font weights for Cascadia Code are expected to ship within the next few months!

Alt+Click to open a pane

If you’d like to open a profile from the dropdown menu as a pane in the current window, you can click on it while holding Alt. This will open that profile in a pane by using the auto split feature, which will split the active window or pane across the longest length.

You can now color your tabs by right-clicking on them and selecting “Color…”. This will open the tab color menu where you can select a predefined color or expand the menu to select any color using the color picker, hex code, or RGB fields. The colors for each tab will persist for that terminal session. A huge thank you goes out to gbaychev for contributing this feature! 💡 Tip: Use the same hex code that is used as your background color for a seamless experience!

In the same context menu where the color picker lives, we have added a tab rename option. Clicking this will change your tab title into a text box, where you can rename your tab for that terminal session.

Thanks to WinUI 2.4, we have added compact tab sizing as an option for the tabs in the tabWidthMode global setting. This will shrink every inactive tab to the width of the icon, leaving the active tab more space to display its full title.

We have added some additional commands to use as arguments when calling wt from the command line. The first is --maximized, -M, which will launch Windows Terminal as maximized. The second is --fullscreen, -F, which launches Windows Terminal as full screen. These two commands cannot be combined.

The last is --title, which allows you to customize the title of the tab before launching Windows Terminal. This behaves just like the tabTitle profile setting.

Open defaults.json with the keyboard

🐛 The character under the filledBox cursor is now shown.

🐛 You can now control if Windows Terminal will treat Ctrl+Alt as an alias for AltGr with the altGrAliasing profile setting.

🐛 The spacing above the tabs has been removed when the terminal is maximized.

We had some great contributions for this release and we would like to give those who made an impact a special shout-out!

Signing off If you’d like to learn more about the latest features, feel free to check out the Windows Terminal docs site. If you have any questions or feedback, you can reach out to Kayla (@cinnamon_msft) on Twitter. If you find any bugs or would like to file a feature request, you can file an issue on the Windows Terminal GitHub repo. We hope you enjoy the first update of Windows Terminal Preview!