You can install multiple Linux distros on Windows. If you followed the tutorial in the earlier blog post, you installed the Ubuntu “LTS” (Long Term Stable) release, which is currently version 18.04. You can install another distro such as Debian from the store (just search for “Debian”), such that you end up with two different distros installed. 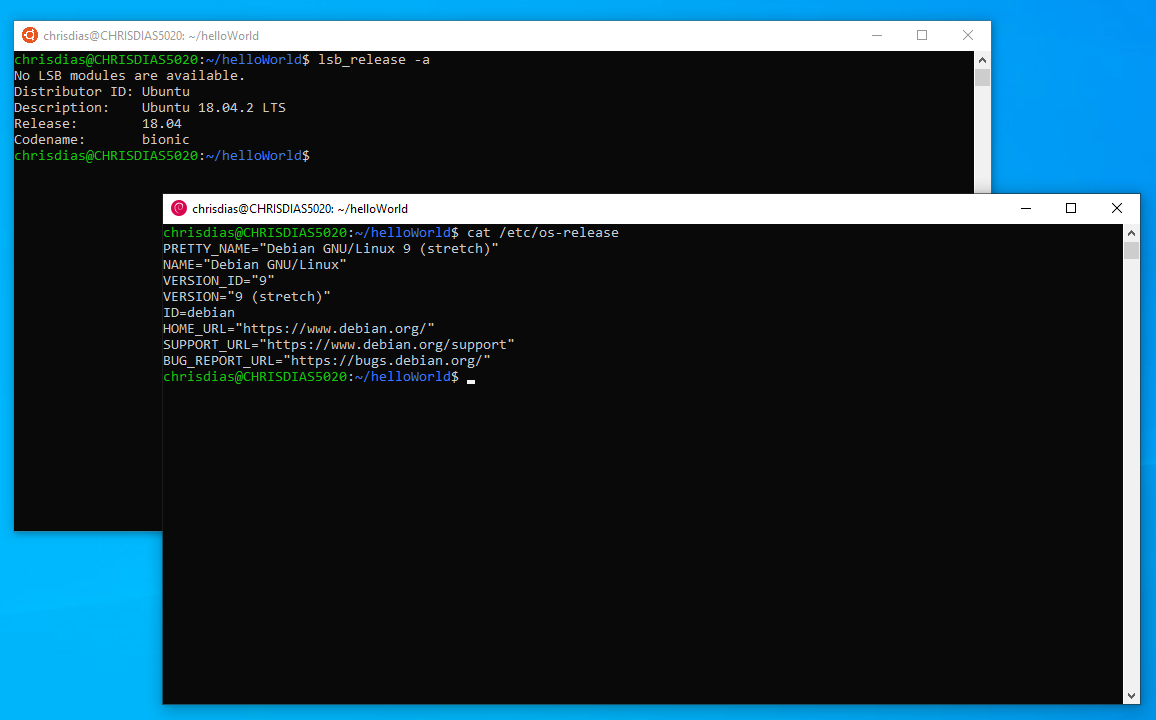 If you are connected to one distro and want to open a new VS Code window, bring up the Command Palette (F1), search for “distro” and choose the command Remote-WSL: New Window using Distro…. This will bring up a quick pick that will let you choose between the different distros you have installed. Once you pick a distro, a new instance of VS Code will open connected to the appropriate distro.

You can also run the Remote-WSL: New Window using Distro… command from the Remote – WSL command dropdown displayed when you click on the remote development Status bar item on the far left.

Sometimes you need to switch between local workspaces (folders) in Windows and remote workspaces in WSL.

Here are a few commands that will make switching a snap:

You can easily set up different default shells when opening a terminal in VS Code. For example, when running on the Windows side, you can specify PowerShell or WSL. When running in WSL, you can choose bash or zsh or whatever shell you might have installed.

Open a new terminal Terminal > New Terminal (Ctrl+`) and open on the dropdown. Choose Select Default Shell and if you are on the Windows side, you’ll see Command Prompt, PowerShell, or WSL Bash:

If you are connected to a WSL instance, you’ll see all of the shells defined in /etc/shells:

In the current version of WSL (WSL1), there is a limitation where it is not possible to rename a non-empty folder from VS Code. To work around this issue, you can tell VS Code to “poll” for file system changes rather than apply a lock to the folder.

In your user settings.json, add:

Polling is resource heavy, so it is not turned on by default. You can also tune how often VS Code polls using the remote.WSL.fileWatcher.pollingInterval setting, which is by default every 5 seconds.

You will need to reload VS Code (Developer: Reload Window from the Command Palette (F1)) for these settings to take effect. The next version of WSL (WSL2, which is in preview) fixes this issue and provide significantly better file system performance.

It’s still in the experimental stage and requires you use the VS Code Insiders build, but you can run VS Code in Alpine distributions.

WSL and VS Code lets you do productive Linux development from the convenience of your Windows machine. To learn more, see the VS Code Remote Development documentation, where you’ll find guides and tutorials.

And keep following the Windows Command Line Tools blog and the Visual Studio Code release notes for further improvements to WSL and the Remote – WSL extension.

This is the final part of our VS Code and WSL series of blog posts. We’d like to give a big thank you to the VS Code team for collaborating with us to create these, and for developing an amazing program that works great with WSL. You can find the full series here:

Kayla Cinnamon
August 27, 2019
20 comments
Cascadia Code
Cascadia Code is finally here! You can install it directly from the GitHub repository's releases page or automatically receive it in the next update of Windows Terminal...