While many of the features in Visual Studio 2012 are available to users using TFS 2008 or 2010, there are some features that are only available when using a TFS 2012 server.  Also, the web experience in TFS 2012 has been rebuilt entirely from the ground up, and the result is a fast, fluid experience that also includes new experiences tailored to Scrum.

Once you’ve upgraded your server to TFS 2012, installed your first TFS server, or are using the Team Foundation Service Preview, here are some of the features you are now able to use.  The goal here isn’t an exhaustive list but to get you started.

Alerts editor – Replacing the power tool, there’s now an even better experience built into the web UI for managing your email notifications.  You will be able to see and manage all of your alerts in one place.  To get to it, go to a project, click on your name in the upper right, and choose Manage Alerts.  Note that you can only get to it if your administrator has configured your server to send email.

Retry build – If your build fails for reasons unrelated to your changes, you can now right-click and retry it.

My Work – This is a new feature of Team Explorer that allows you to suspend and resume work quickly and easily.  This feature is only available in Premium or Ultimate.

Code Review – You will be able to use the new code review experience.  You can start a code review from the Pending Changes page in Team Explorer or from the History window by right clicking on a changeset.  Your list of code reviews is shown in the My Work window.  This feature also requires Premium or Ultimate.

Agile/Scrum – We’ve added a first-class experience for Scrum in TFS 2012 in our web UI.  To use these, teams will need to be created.  You can learn more here.

Storyboarding – This is available in VS Premium or Ultimate and in Test Pro, and TFS 2012 adds a Storyboard tab to work items such as User Story.  You can learn more here and find additional shapes here.

You can also use the new unit testing features to run tests via Nunit, xunit, qunit, and more in your TFS build (aka team build). 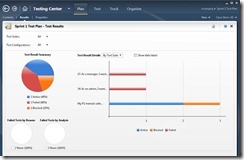 [UPDATE 6/7/2012]  TFS Express does not include any of the Agile features.  It is really focused on source control, build, and bug tracking.  You can read more about it here.

How to customize the build summary page in TFS 2012 without a plug-in
Jason Prickett has been writing some great posts about the new features in Build for TFS 2012.  One of my favorites is the ability for you to add sections to the ...