Where in the world is Brian?

I apologize for being away for so long.  It’s been a weird summer.  I was out of the office for almost a month and have spent the last week furiously trying to catch up.  So I’ve been absent from my blog for a while now.  I’ll fill you in on some of the details. Italy This year is my parent’s 50th anniversary.  My brother and I (well actually our wives) decided to take them on a trip to celebrate.  We packed up my family (my wife and I + 4 kids) and my brother’s family (he and his wife and 2 kids) and our parents and went to Italy.  All told we were gone about 10 days (2 of which were just flying).  We spent time in Rome, Pompeii, Florence and Venice.  I think everyone really had a fantastic time – my mother, especially.  My dad’s a bit more stoic and doesn’t get excited about much 🙂 Northern Tier We got back just before the 4th of July weekend and spent a couple days at home before my 15 year old son and I headed out for a Boy Scout high adventure camp called Northern Tier.  Overall, that trip was about 10 days – with 8 days and 7 nights in the wilderness.  I can’t say that I was excited about camping for 7 nights with nothing but what we could carry (including canoes) but, having done it, wow, it was a cool experience. After the first day on the water, we hardly saw anyone.  That is truly a remote wilderness and feels incredibly untouched.  Overall, we canoed about 75 miles in and around various lakes.  I think we did about 15 or so portages totaling 2-3 miles.  We had a couple of particularly exciting days when we had heavy rain and high wind (~20 miles per hour sustained and ~40 miles per hour gusts).  We still canoed and on one of the big lakes (called Knife lake) the swells were high enough to be coming up over the top of the canoe.  That was definitely an adrenaline rush.  One of our canoes swamped in the process and had the be rescued.  The rescue canoe slammed against some rocks and got a puncture (which we repaired with duct tape – you only have what you carry).  The scenery was beautiful and the time I spent with my son was priceless.  I’m sure I’ll remember it for the rest of my life. Here’s one of our canoes (there were 9 of us in 3 canoes). 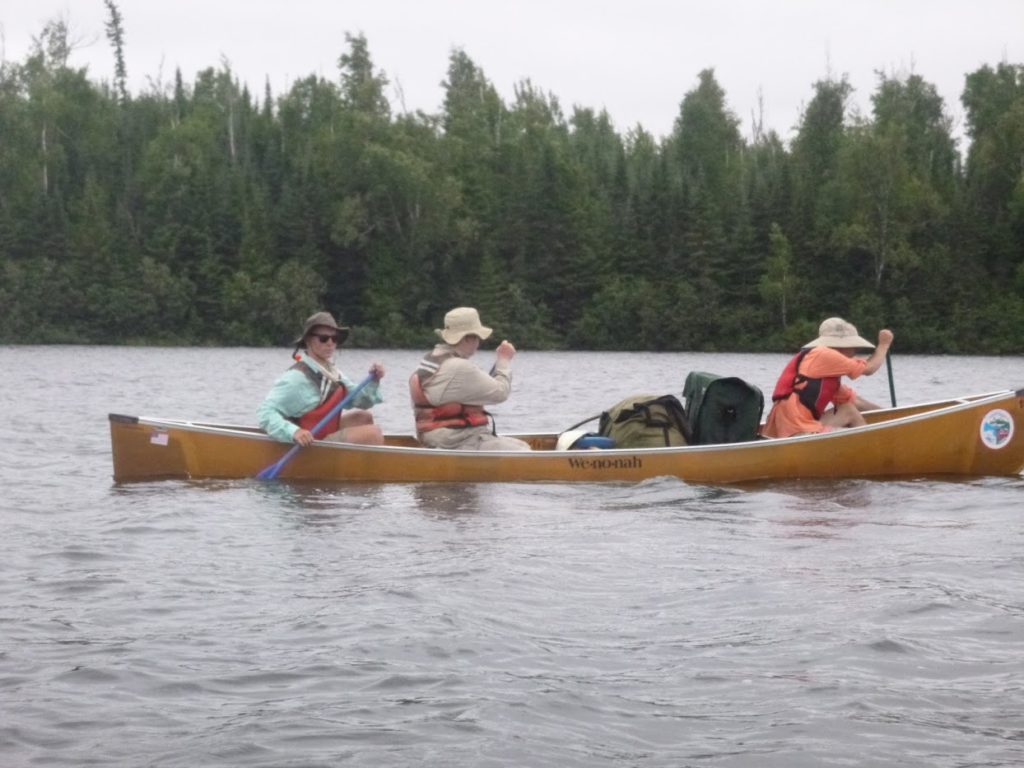 Here’s a couple of scenery views taken during lunch stops. 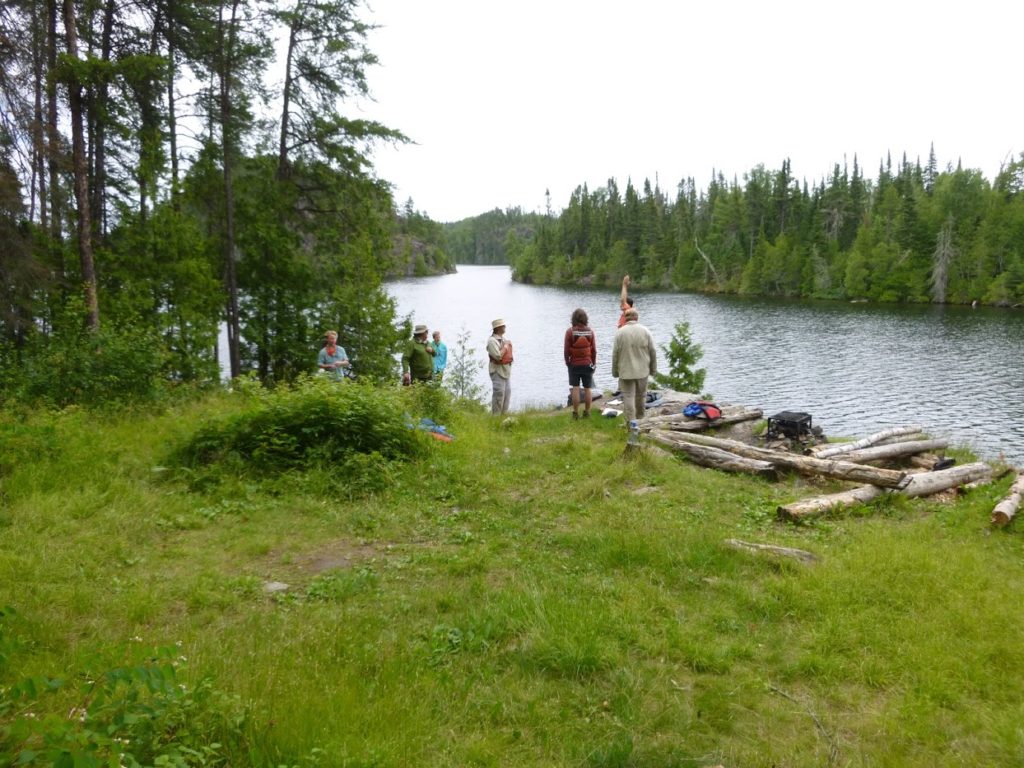 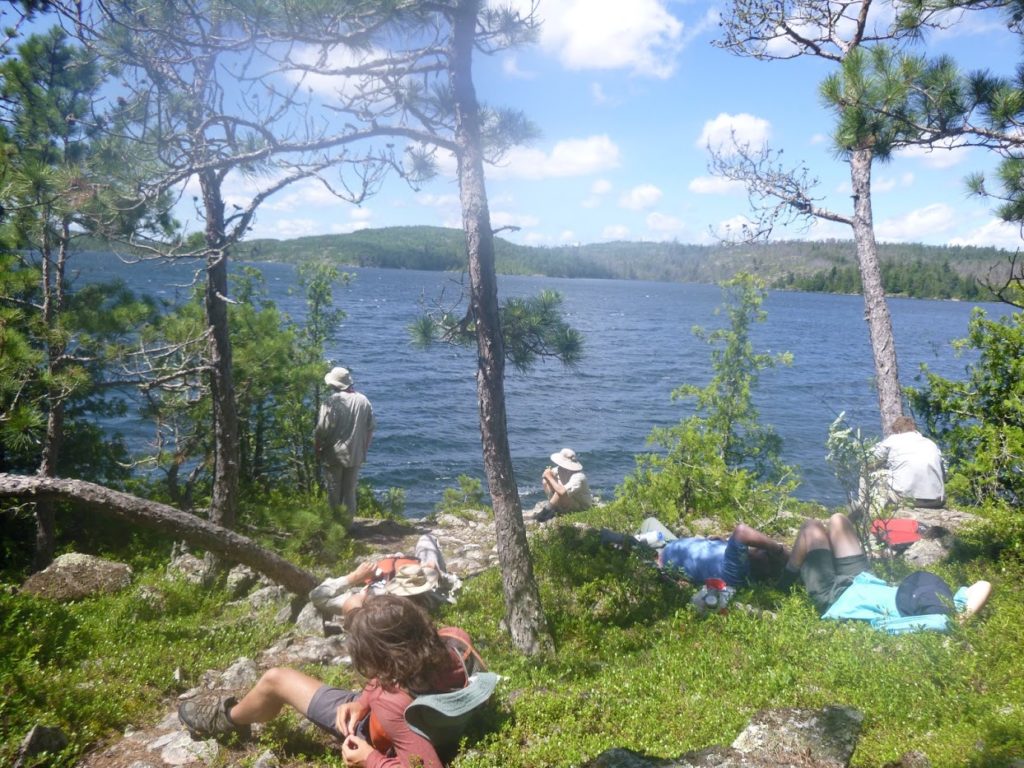 And here’s my son and I when we stopped at the Canadian border crossing.  By this point, we were pretty ripe.  It was the day before the end of our trip so it was 7 days without showering or changing clothes (did I mention that you only have what you carry? – clothes, food, canoes, cooking equipment, camping gear, etc.).  Spare clothes are a luxury you can’t afford – each person only had 2 sets – a “wet” set that you wore all day, got soaked, never dried over night and then put back on cold and wet in the morning, and a “dry” set that you wore in camp at night and slept in.  I can’t say that I ever before appreciated the pure joy of putting on dry clothes (especially socks) after spending all day in wet clothes.  I’m not sure how the people at the border crossing handle the smell of all of the canoers who stop there.  I was used to it after 7 days and it still was pretty awful 🙂 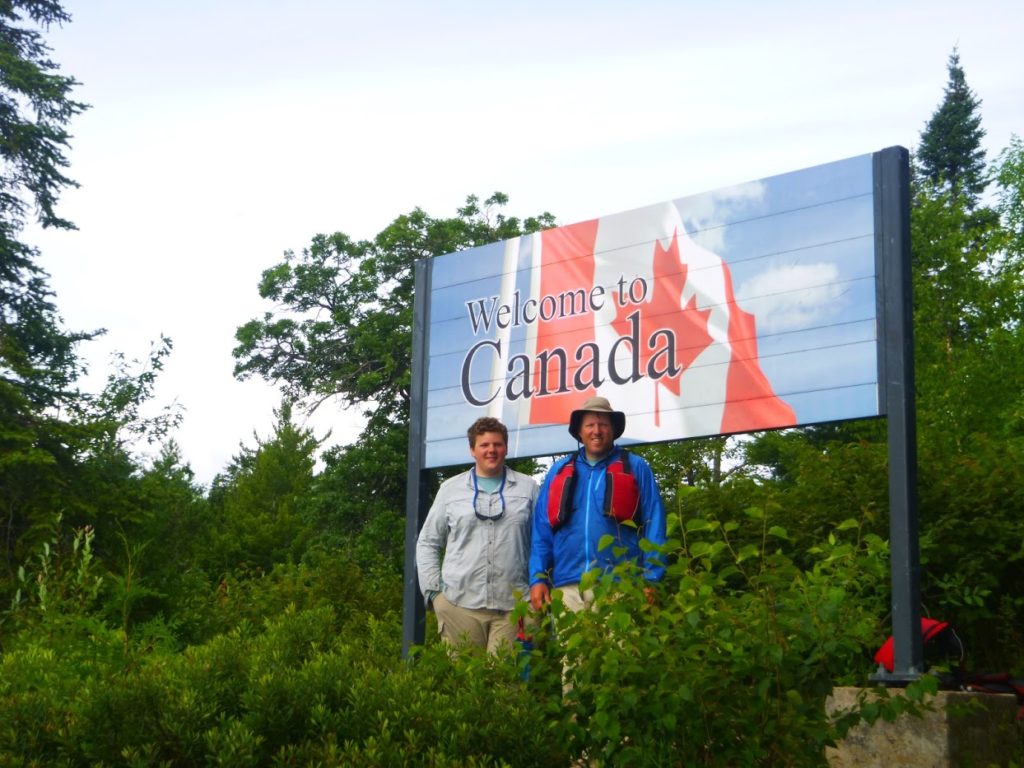 Lastly, I was just amazed at how much water there is up there in the boundary lakes.  They don’t call it the land of 10,000 lakes for no reason.  Here’s a picture of the wall map that the kids used to plan their route.  It was hard to get a great picture of it but you get the idea from the amount of blue on it. 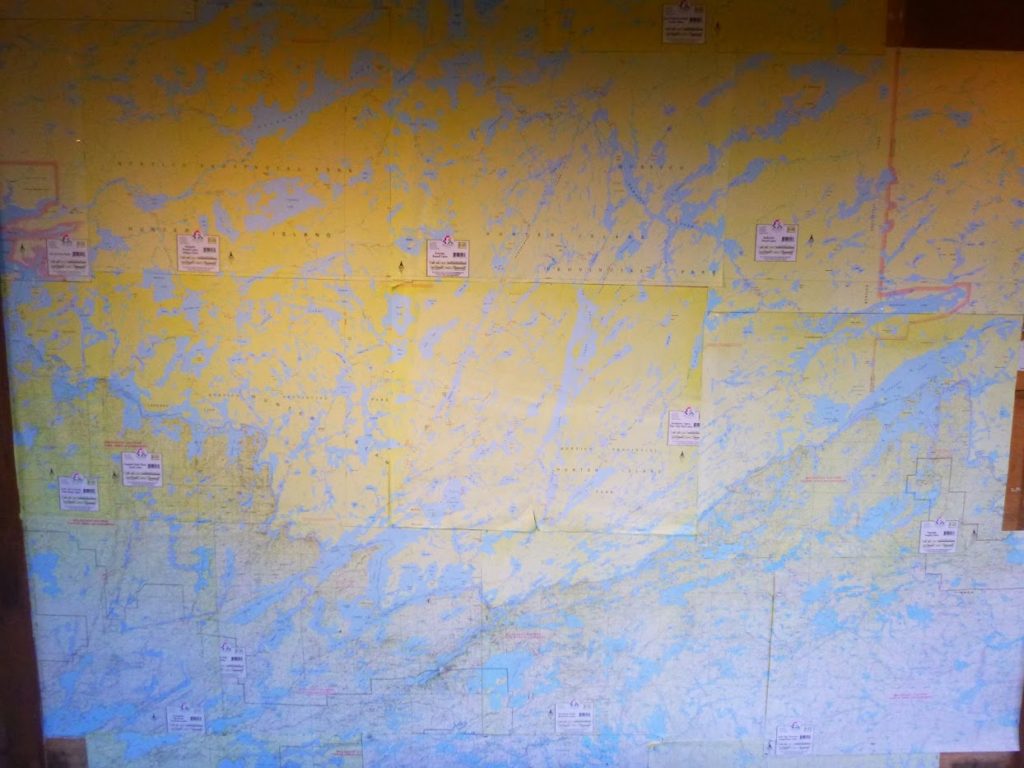 Redmond I got back home from Northern Tier at 2:00am on Saturday night and at 7:00am on Monday morning, I had to catch a flight to Redmond for a visit to the mother ship.  Between the normal craziness of a million meetings when I visit and trying to catch up on 3 weeks of being out, I didn’t have any time for blogging.  I took the redeye home Friday night and finally got some time in my bed at home (though Saturday, I was pretty bleary from the overnight flight). Back in North Carolina So, finally, this week, I’ve been back in the office in NC and finishing catching up.  I made it through about 2 weeks of my mail backlog (that’s literally thousands of emails) and decided if there was anything older than that that I missed, someone will send it to me again.  So, if I missed anything you sent me or any blog comments that were important to you, poke me again and I’ll respond. I haven’t been away from work that much in as long as I can remember – at least 10 or 15 years.  It was fun but I’m glad to be back home and back into a more normal rhythm.  Of course, in all that time, the farm work got just as far behind as the Microsoft work did but farm work is infinite so it’ll keep.  The animals all survived and everything is OK so all is good. Thanks.  I hope you had a good summer too. Brian

What I missed while I was relaxing this summer
I missed blogging about a ton of stuff that happened in late June and most of July while I was out.  I'm not going to try to recap is all.  You can find lots of it on ...

Brian Harry
August 5, 2016
0 comment
TFS "15" RC1 is available
Today we released Team Foundation Server 15 Release Candidate 1.  This is a "go-live" release, fit for production use and supported by our support team.  You can find ...