A Lesson in Farming

Take my advice.  Don’t get in a round bale ring with a cow. It’s been a while since I’ve written about my alter-ego – farmer Brian.  I’ve been meaning to write a general farm update post and still hope to in the next couple of weeks (with pictures and all).  But something happened this last week that was funny enough that I just had to take a few minutes and write about it. Our summer this year was extremely dry and, as a result, all the grass went dormant in Aug/Sept.  Because of this I’ve been feeding hay for the last several weeks to try to give the grass a chance to recover now that the fall rains have started.  So every day or two I have to deliver the cows fresh hay bales.  These aren’t the little rectangular bales (called “square bales”) that you might be used to.  They are huge 4’ x 5’ round bales that weigh about 1,000lbs each.  So you deliver them with a tractor and drop them in a “round bale feeder”.  My round bale feeders look something like this: 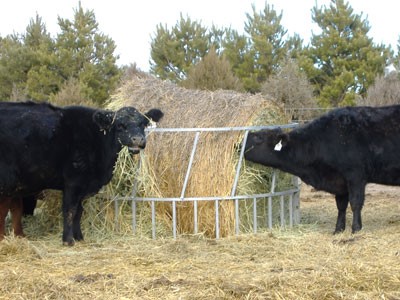 Cow’s eat a shockingly large amount of hay and, collectively, mine will devour a couple of thousand pound bales in a day.  So, after a while that big bale just becomes a layer of hay on the ground a few inches high.  When this happens some of the younger calves will squeeze through the bars and stand in the middle of the ring to eat the hay more easily.  I’ve observed this for a long time and when I bring out a new bale I just drive up to the ring and kind of lower the new bale toward the calf and the calf gets scared and jumps out of the ring and all is good. Well, the other day I was repeating this ritual and I noticed that a bit of a larger calf had managed to get themselves in the ring – he was probably 400lbs or so.  I lowered the bale toward him and he ran around a bit but wouldn’t jump out.  So after trying this uselessly for a few minutes I backed the tractor up and got down and tried to shoo him out.  Well, that didn’t work either.  So I figured,  OK, I’ll get in the ring with him (they are about 8 feet across so there’s plenty of room) and shoo him out that way.  This is where the story goes bad. With me in the ring with him, he finally decided to jump back through the openings.  He tried 2 or 3 times but every time his front shoulders hit the posts and he was stopped.  Dang, he was too big to fit through.  Well, it turns out that not all the gaps are the same size.  The gaps where the two halves of the ring join together are bigger (on my rings).  So I thought I’d just chase him around to that gap and shoo him out.  Seemed like a good plan. And it worked, kind of.  I shooed him out the larger hole, however these holes at the joints, while bigger, are not uniform shape.  they are big at the bottom and smaller at the top.  My friend jumped through the gap but then got his rear hips stuck in the top of the gap.  He didn’t like that and panicked.  He started running like crazy, dragging the bale feeder behind him.  Now mind you these bale feeders are quite heavy.  I’m a pretty big guy and I’ve drug them across a field before but it’s exhausting work (I usually turn them on their side and roll them if I need to go far).  Anyway, this cow is dragging the bale feeder across the field at a pretty good clip and here I am, inside it with no good way to get out.  Yikes! I’m running along with it, pulling on it trying to get him to slow down/stop.  After he’s dragged it about 100 feet, I suddenly realize he’s headed for the pond.  God knows why but now I’m thinking, this could actually be pretty serious.  After about another hundred feet, I finally managed to get him to stop long enough for me to lift the feeder up 6 inches or so and he was able to wiggle out. It definitely upped the adrenaline level and taught me a lesson:  Don’t get in a bale feeder with a cow.  Take my advice. This is but one of many lessons and experiences from farm life but I thought you might find it amusing.  Now back to your regularly scheduled programming… Brian

Brian Harry
October 22, 2010
0 comment
Praktik Hosting Updates their Hosted TFS Offering
One of our relatively long term hosting partners - Praktik Hosting, has just updated their hosting offering based on our TFS 2010 product and licensing changes.  The...