Development with SQL in containers on macOS

There are a bunch of tools available for developing with SQL on macOS, including the mssql extension for VS Code and the standalone yet-comfortably-familiar Azure Data Studio. As a developer, you might have heard about the Azure SQL Database emulator and you’ve most certainly heard about deploying SQL in containers. Most recently, a new option for running SQL containers locally on your arm64 (M1/M2) Mac became available and it makes running full SQL Server images easier than ever.

In the v4.16 release of Docker Desktop, support for using Rosetta for emulation of x86/amd64 images was introduced as a beta feature, enabling improved performance and stability for running container images built for x86/amd64 on macOS 13 (Ventura).

Once you’ve enabled the new option under Settings in the “Features in development” pane, your will restart the local container runtime to apply the changes. 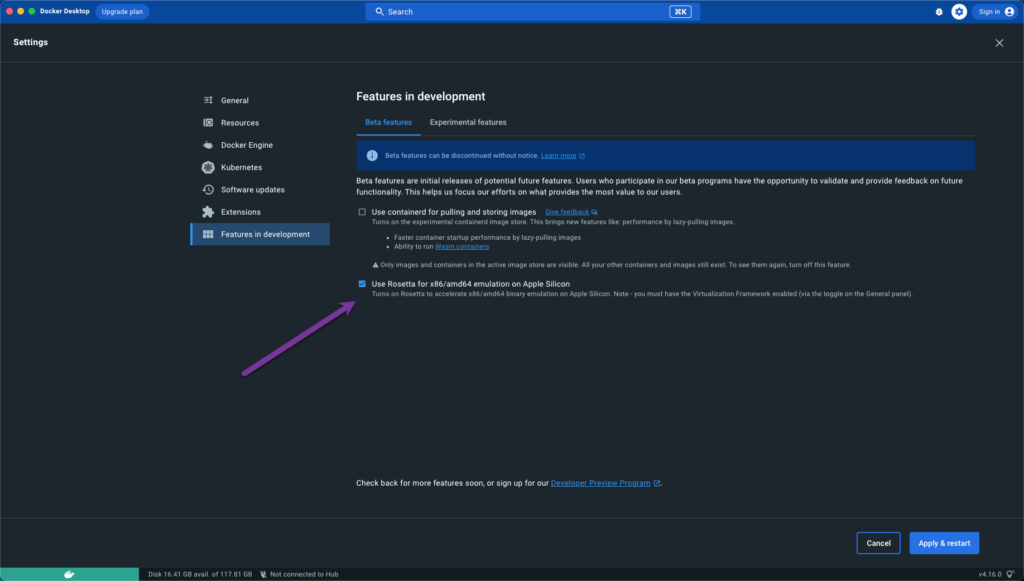 From here on, we can follow the usual steps to pull a container image and run it:

When you run the docker run command for an amd64 image on a workstation with arm64, you will see a brief warning about the image architecture and the container id on the following line.

If you’d prefer not to receive the warning message, you can include –platform linux/amd64 in the docker run command.  The informational warning alerts you to the emulation that will occur to run the image in that environment.

With Rosetta emulation for amd64 enabled, the SQL Server container will generally run with an indiscernible performance impact due to the emulation of amd64 binaries for arm64 and is suitable for development purposes.  The SQL instance is now available to connect locally, whether from a tool such as Azure Data Studio or from an application being developed and run locally.

Note: If you have not installed Rosetta 2 on your machine, you may need to run this command:

We saw above an example command to pull the free Developer edition of SQL Server in a container and run it locally on port 1433.  SQL containers can be customized with changes to the docker run command or with a Dockerfile for further configuration. Some popular options are:

Azure SQL Edge also offers an arm64 image, which that runs without the host emulation layer that may show a performance impact under some workloads. For the perspective of a development environment, I’d like to offer a rudimentary comparison of the performance of Azure SQL Edge vs SQL Server 2022 running on an M1 Mac:

On the left is a SqlPackage import of an AdventureWorks bacpac (388KB) to an arm64 Azure SQL Edge container and on the right is the same SqlPackage import operation to a SQL 2022 container running with Rosetta emulation. The Azure SQL Edge import took a fraction of a second longer than the SQL 2022 import, both of which completed in under 6 seconds.  In this process, I’ve imported the database objects (tables, stored procs, indexes) as well as the data for a small sample database.

Get started with SQL containers on macOS

Drew Skwiers-Koballa
December 13, 2022
0 comment
CTEs, Views or Temp Tables?
I've just finished watching the video from the @GuyInACube about Common Table Expressions and I noticed that in several comments there was the request to explain ...