Today, we’re releasing Visual Studio 2017 version 15.5 into stable. This release includes many improvements for mobile developers, including enhancements to XAML editing, the Xamarin Live Player, File -> New Project, and our Mac pairing mechanism. We’ve also made our Remoted iOS Simulator feature available in all editions of Visual Studio, including the free Community Edition!

You can update to Visual Studio 2017 version 15.5 today by opening the Visual Studio Installer and clicking ‘Update’. For more details about what’s included in this release, be sure to check out the details below.

Building UIs with Xamarin.Forms has become even easier with the Xamarin Live Player in Visual Studio 2017 version 15.5. This release adds the ability to preview XAML in an Android emulator (Windows and Mac) or an iOS simulator (Mac only) live as you type, including support for rendering design-time data:

Previewing XAML with the Xamarin Live Player feels natural; as you move from document to document, Visual Studio will automatically preview the active XAML document for you. Entering “Live Run” mode to quickly iterate and see code changes reflected in your UI on device or simulator is as easy as pressing Shift+Alt+F5, or by clicking the “Live Run” button that appears at the top of the editor for XAML.

Live Player devices act and feel just like regular emulator and device debug targets. The Xamarin Live Player already supports breakpoints when debugging, and we’ve improved how the overall functionality integrates into Visual Studio in this release, including integration with the Console and Error windows.

Remoted iOS Simulator for All

The Remoted iOS Simulator, which allows developers to test and debug iOS apps entirely in Visual Studio on Windows, is now available to all editions of Visual Studio, including the free Community Edition! The simulator supports functionality like location simulation, rotation, gestures, and even includes functionality that the iOS simulator on Mac does not, like multi-touch. To begin using the Remoted iOS Simulator today, update to Visual Studio 2017 version 15.5 and select an iOS simulator. Once the debug session begins, the simulator will automatically launch on your Windows machine.

Developers are excited about .NET Standard for sharing code across iOS, Android, and Windows, and have been asking us to make it easy to get started with Xamarin.Forms and .NET Standard. Beginning today, File -> New -> Cross-Platform App (Xamarin.Forms) will give you the option to select .NET Standard as your code sharing strategy. In addition, we know that sometimes you begin a project with certain platforms in mind, so we have also added the ability to select which platforms your app will target. 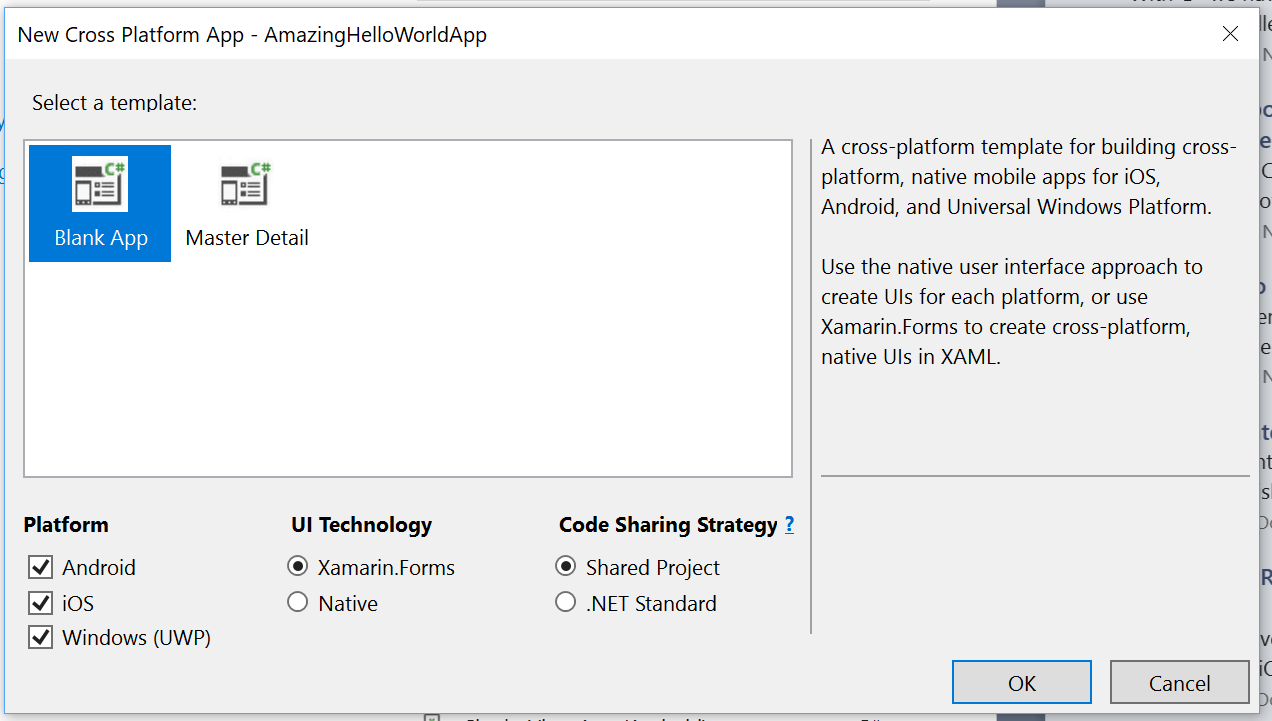 .NET developers know the pain that is packages.config. This file is meant to be a canonical list of all NuGet packages referenced by an app, but quickly turns into an unmanageable mess. That’s why starting with this release, all new Cross-Platform template projects will use PackageReference, a new way to manage NuGet packages directly in the .csproj file. One of my favorite things about PackageReference is that all packages listed are transitively restored, meaning that you only need to define the top-level NuGets that your app consumes; no more dealing with the 100s of dependencies that your packages reference!

To manage packages, you can continue to use the NuGet Package Manager, or directly edit your .csproj to add something like this:

Finally, we also spent time making the template “unfold” process faster. You should notice that a new Xamarin.Forms template project unfold is 5-10x faster than it was in previous releases.

We’ve made it easier to pair your Windows machine to a Mac to build iOS apps with the introduction of a new connection workflow. Once a connection is initiated to a Mac, a status bar is shown with the progress of your connection attempt and any actions or issues will display directly in the status area. We Need Your Feedback

Lacey Butler December 5, 2017
0 comment
Even Easier iOS App Provisioning in Visual Studio for Mac
iOS provisioning is a notoriously hard concept to grasp; even the best developers can be stumped by a signing identity. As a content developer at Xamarin, I’ve ...