One of the highlights of Xamarin Evolve is the Darwin Lounge, a hall filled with programmable devices ranging from robots to iBeacons and quadcopters to wearables. One thing that was particularly intriguing this year was a stack of kits from DodoCase, “inspired by Google Cardboard.” Google Cardboard is an inexpensive stereoscope that exploits the ridiculously small pixels of modern phones. Instead of synchronizing two displays, it directs your eyes separately to the two halves of a phone screen in portrait mode. 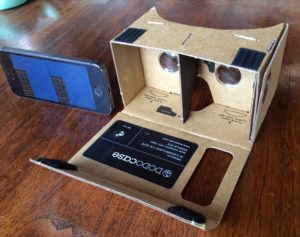 Unfortunately, all of the resources for programming Google Cardboard have been Android only. This is not the Xamarin way and could not stand! Luckily, Joel Martinez had written a 3D demo for our talk, Make Your Apps Awesome With F#, and it was just a matter of a quick hacking session to see our Xamarin.iOS code in glorious stereoscopic 3D. 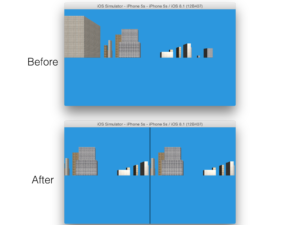 As Mike Bluestein has written previously, the easiest way to program 3D on iOS is to use Scene Kit, which is what Joel and I had done for our demo. Stereoscopic programming in Scene Kit, as it turns out, is easy!

One great aspect of F# and the functional programming style is that refactoring is often easier than object-oriented refactoring. Instead of creating new objects and data structures, you’re generally focusing on “minimizing the moving parts” and extracting common functionality into reliable functions.

For instance, the first thing we needed to do was switch from a single UIView to two side-by-side views. We refactored this code:

Although you may be more familiar with C# than F#, you should be able to follow what’s going on in the original snippet. We had a RectangleF as big as the entire screen’s Bounds. We created a single SCNView called s. We configured s to show our scene and then, because we don’t need to do any more manipulation on the result of that calculation, we called the ignore function with the result (the |> is F#’s pipe operator, which works just like the familiar pipe operator on the UNIX command-line or PowerShell). Finally, we assigned this single SCNView to be the main View of our controller object.

To refactor, we introduce an outer view that will contain our two eye-specific views. We then use the |> operator again to:

Now we have two side-by-side SCNViews, but each is rendering the exact same scene, so there is no 3D effect. Scene Kit is a scene-graph toolkit, and to get a stereoscopic 3D effect, we’re going to need two camera nodes slightly separated in space. That’s easy. We replace:

Note the slight difference in the first argument to the SCNVector3 constructor – this eye-position vector is the “moving part” that we want to isolate. So now our camNode has two subnodes, each containing a node that defines one of our eye positions.

It’s worth emphasizing that this function is strongly-typed. Even though it doesn’t explicitly state that loc is an SCNVector or that it returns an SCNNode, F#’s type inference is powerful enough to figure that out and enforce the types at compile-time. (As for programming style: “Is it better to explicitly declare types in the function signature or let them be implicit?” is the type of discussion that happens both in the Darwin Lounge and at Xamarin Evolve parties…)

Now we have two scenes and two camera nodes. To join them together, we use:

And there you have it! In the following image, you can see the converging perspective of the building climbing into the sky. This might not be ready for the Avatar sequel, but it’s really cool when viewed through Cardboard!

Here’s something James Cameron can’t do, though: exploit the gyroscope and accelerometer on iOS devices. This block of code shifts the orientation of the camNode camera node so that it tracks the direction in which the user is looking:

To experiment with stereoscopic 3D in Xamarin and F#, download this Starter-compatible project in Xamarin Studio on Mac or Windows.

Help Test the Future of Xamarin.Mac
Xamarin.Mac and Xamarin.iOS have always been close sister projects, sharing much of their underlying tooling and infrastructure. One of the features in the upcoming

Miguel de Icaza November 19, 2014
0 comment
Real-Time Code Iteration with Sketches
Sketches are a powerful new feature that we announced as a preview release at Xamarin Evolve in October. With Sketches, developers can iterate on code within Xamarin