As the opening ceremony to the 2012 Olympics Games started on Friday night, Pavel Sich found out that his London Official City Guide app was featured as an Editor’s Choice on App Stores around the world. Sich’s company, iOS Bits, worked closely with IMImobile and used Xamarin technology to build the iPhone and Android app for London & Partners (the Mayor of London’s official promotional organization), timing the app’s launch with the Olympics so that London visitors can find events, attractions and places to stay, eat and shop.We had a chance to catch up with Pavel and find out a little bit more about the app and what it is like to develop an app for such a highly visible event like the Olympics.

London’s population is expected to swell by 30% during the Olympic Games, making “fast time to market with quality apps on both platforms” big requirements for the project according to Sich. The app was developed in just under 8 weeks on both platforms, with iOS released first and then Android just 2 weeks later. 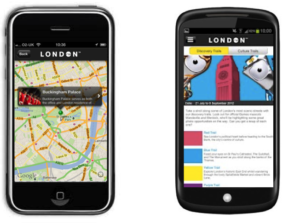 One of the unique features of the app is the Discovery Trails, an interactive map that guides users through walking tours of London landmarks. Sculptures of the Olympic mascots, Wenlock and Mandeville, can be found along each trail and the app helps people find each mascot.

Working with IMImobile, iOS Bits considered a variety of technologies for building the app. “We ruled out suboptimal HTML5 and pseudo native technologies as these couldn’t deliver a rich, native user experience and are not sufficient for tight integration with the complex APIs for this project,” according to Sich. Objective-C and Java were ruled out “because the tight schedule made two codebases with no code sharing impractical.”

“With Xamarin we saved 6 weeks for the app just by reusing major parts of the code between both platforms, and yet preserving the native user experience” says Sich. “Taking into account that there had been an API change and updates, it would be just impossible to achieve this app in a few short months without Xamarin.”

As anyone developing apps knows, getting users to find your app is often more difficult than building the app itself. Much like the Olympics, the app world is a fierce, global competition where only the elite are recognized. So, kudos from Xamarin to iOS Bits, IMImobile and London & Partners for achieving the App Store Editor’s Choice – a “gold medal” in the app world. 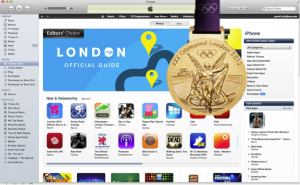 PictureTHIS: Word Fun for Both iOS and Android Users
PictureTHIS - a social word game where your friends try to guess words based on photo clues you provide -  launched today for iOS and Android devices.  Created by

Jo Ann Buckner August 7, 2012
0 comment
Award-Winning Game, Bastion, Comes to iPad Thanks to Xamarin
Bastion, the award-winning PC and Xbox 360 game that sold more than 500,000 copies in 2011, is making its debut today on the iPad. Using Xamarin, along with the open