With Visual Studio 2017 version 15.4 now stable and sporting some awesome new features, such as Xamarin Live integration, Android Oreo / iOS 11 support, and a smarter, smaller installation, it’s time to turn our attention to the next version of Visual Studio 2017, version 15.5! This upcoming release is now available as a preview which, like all Visual Studio previews, is a separate and sandboxed installation than your stable one. This means it’s completely safe to try without risking your production development environment.

In this blog post we will take a look at some of our favorite new features landing in the Visual Studio 2017 version 15.5 previews. Be sure to give the release a try and let us know how it works for you and your team!

Xamarin Live enables developers to continuously deploy, test, and debug their apps directly on iOS and Android devices. After downloading the Xamarin Live Player app from the App Store or Google Play, you can pair your device with Visual Studio and revolutionize the way you build your next app. And with the “Live Run” functionality, you also get a real-time preview of your XAML as you type! In this release we’re adding more integration for Xamarin Live with Visual Studio and enhancements to the Live Run functionality to make building XAML UIs natural and productive.

We know that developers are looking for easy ways to preview XAML and cut down on long debug-deploy-test cycles. The “Live Run” functionality allows you to preview changes to your XAML in real-time on a device as you type. Once you have entered a live run mode, Visual Studio will automatically re-deploy your XAML whenever the active document changes and render the entire context of the page, including the binding context and the codebehind! There is also a new context menu option (Tools > Xamarin Live Player > Live Run Current View ) and keyboard shortcut to make live running XAML fast and easy.

Check out the improved workflow for Debug and Live Run in Visual Studio 2017 version 15.5 below:

Visual Studio 2017 version 15.5 Preview is now out! Xamarin Live gets lots of enhancements. Check out the video below for the full flow! pic.twitter.com/96h1NPMDc6

Live Player devices act and feel just like regular emulator and device debug targets. Xamarin Live already supports breakpoints when debugging, and in this release we improved how the overall functionality integrates into Visual Studio. For example, it will now warn you when you attempt to perform an unsupported operation, such as live running an iOS app on an Android device, and suggest actions to resolve the issue. We’ve added a visual indication of the deployment status operation in the status bar as well so you know exactly where the deployment operation stands.

Finally, we’ve integrated Xamarin Live with the Console and Error windows in Visual Studio. If you log any output in your app (such as Console.WriteLine), it will now show in the console output while deployment errors will be surfaced in the Visual Studio Error window.

If you have ever built an iOS app with Xamarin on Windows then you know you must connect to a Mac in order to perform builds. So in this release we have added new functionality that improves the connection workflow so you can start building iOS apps in Visual Studio even faster. 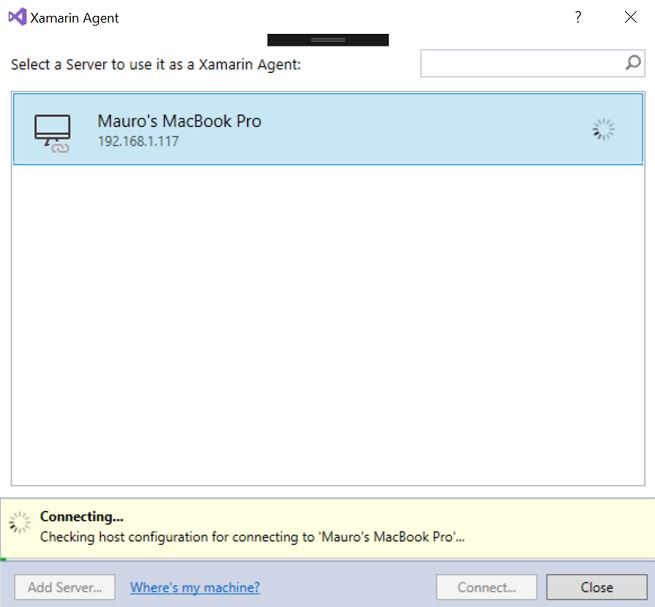 These are only a few of the new features in Visual Studio 2017 version 15.5. This release contains so much more, including updated Xamarin SDKs for iOS and Android, lots of bug fixes, the integration of the Xamarin Android SDK Manager into the install, and improvements to our extension for accessibility and localization.

To get started with the previews today, download the Visual Studio Preview installer and select the Mobile .NET (Xamarin) workload just as you did for your stable installation. Remember, Visual Studio previews are installed side-by-side your current installation and are sandboxed from your production development environment.

If you decide you no longer want to use the preview, simply use the Visual Studio Installer to uninstall any preview instance. While your stable installation should not be affected by doing this, we do recommend running a “Repair” on your other installation afterwards as a precaution.

There’s so many reasons to try Visual Studio 2017 version 15.5, so give it a try and let us know what you think via Help -> Report a Problem in Visual Studio, on Developer Community, or reach out to me directly on Twitter.

Adaptive UI with Xamarin.Forms
Xamarin.Forms has supported iOS, Android, and Windows for a long time. We've also added new platforms to keep up with the changing landscape, such as Tizen and macOS,

Adrian Stevens October 16, 2017
1 comment
Plugin and Permission Changes with iOS 11
iOS 11 introduced some fun updates around permissions when accessing certain features on the device. I first noticed these changes when trying to access a user locat