The core algorithmic portions of Hyperlapse are written in Visual C++ Cross-Platform Mobile and the majority of the app business logic was retained in a .NET portable class library. Using Xamarin, the Hyperlapse team was able to leverage the core C++ code and app logic, while providing C#-based native UIs so users of the app feel at home on each platform. Leveraging C++ code in your Xamarin app is easy, as outlined in the below explanation on implementing C++ in your Xamarin.Android apps.

Xamarin already supports the use of pre-compiled native libraries via the standard PInvoke mechanism. To deploy a native library with a Xamarin.Android project, add the binary to the project and set its Build Action to AndroidNativeLibrary. You can read Using Native Libraries for more details. This approach is best if you have pre-compiled native libraries that support either or all architectures (armeabi, armeabi-v7a, and x86). The Mono San Angeles sample port explains how the ibsanangeles.so dynamic lib and its native methods are accessed in Xamarin.Android.

In this approach, dynamic libraries are typically developed in another IDE, and that code is not accessible for debugging. This imposes difficulty on developers, as it becomes necessary to context switch between code bases for debugging and fixing issues. With Visual Studio 2015, this is no longer the case. Through our collaboration with the Visual C++ Cross-Platform Mobile team at Microsoft, Xamarin developers in Visual Studio now have the power to write, compile, debug, and reference C/C++ projects in Xamarin.Android from within their favorite IDE.

As stated above, Visual Studio 2015 supports the development of C/C++ projects that can be targeted to Android, iOS, and Windows platforms. Be sure to select Xamarin and Visual C++ for Cross-Platform Mobile Development during installation. For this post, we’re using the same San Angeles port sample referenced earlier in the Using Native Libraries section. However, its original C++ code is ported to a Dynamic Shared Library (Android) project in Visual Studio. When creating a new project, the Dynamic Shared Library template can be found under Visual C++ → Cross-Platform.

San Angeles is an OpenGL ES port of a small, self-running demonstration called “San Angeles Observation.” This demo features a scenic run-through of a futuristic city with different buildings and items. The original version was made for desktop with OpenGL, and the current version is one of Google’s NDK samples optimized for Android. The source code is available here, ported to Visual Studio.

Now that the Dynamic Shared Library that contains the source code has been directly referenced from the Xamarin.Android project, it works as smoothly as any other supported project reference.

To interop with native libraries in your Xamarin.Android project, all you need to do is create a DllImport function declaration for the existing code to invoke, and the runtime will handle the rest. Set the EntryPoint to specify the exact function to be called in the native code.

Refer to Interop with Native Libraries to learn more about interoperating with native methods.

Now that you have access to the native source code, it’s possible to debug the C/C++ code inside Visual Studio. To debug your C/C++ files, choose to use the Microsoft debugger engine under the Android Options of Project properties. 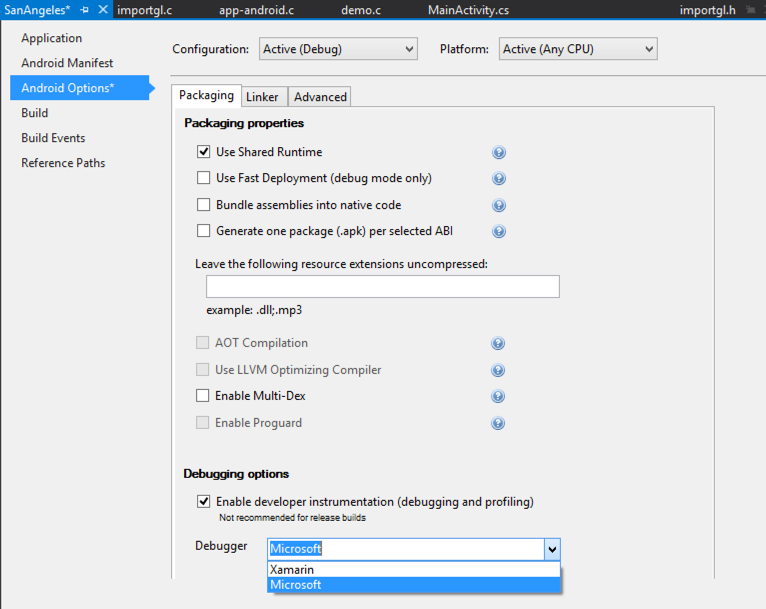 Enable a breakpoint inside your C++ project, hit F5, and watch the magic happen!

Refer to the VC++ team’s blog post at MSDN for a step-by-step guide to building native Android apps in Visual Studio 2015. The source code for the Mono San Angeles port explained in this post is available for download in our samples.

James Montemagno June 29, 2015
0 comment
Summer Fun with Xamarin Events in July
It's July already! The year is already half over, so there won't be a better time to get out and meet fellow Xamarin developers in your area to learn about crafting ...