iOS device provisioning is largely regarded by all iOS developers, Xamarin or otherwise, as being one of the biggest barriers to getting started with iOS. To test and deploy your app on a device, you must enroll in Apple’s Developer Program, create a certificate to sign the app, create an app ID, and register your device with Apple. We’ve written some great documentation on the subject as it’s a complicated process with many points of failure.

We also always want to make things as simple as possible for Xamarin.iOS developers, so you can spend your time focusing on creating great apps, not on iOS provisioning. A few months ago, we introduced Automatic Provisioning to Visual Studio for Mac, and we’ve finally brought these capabilities to Visual Studio 2017 with Version 15.7 Preview 3. In this post, you’ll learn how to use the new automatic signing feature in Visual Studio to deploy your app to a device in about 30 seconds.

To begin the automatic signing process, make sure you’ve signed in to Visual Studio with an Apple ID via the Apple Account options. iOS provisioning requires that you be a member of the Apple Developer Program. If you haven’t signed up yet, now is a good time to do it.

To open the account management window, go to Tools > Options > Xamarin > Apple Accounts. Select the Add button and enter your Apple ID and password. Your credentials are saved in the secure Keychain on your machine, and fastlane is used to handle your credentials securely while passing them to Apple’s developer portal. Once you’ve ensured you have an Apple ID connected to Visual Studio, you’re ready to enable Automatic Signing.

In your iOS project, right-click on the project name and go to Properties > iOS Bundle Signing: 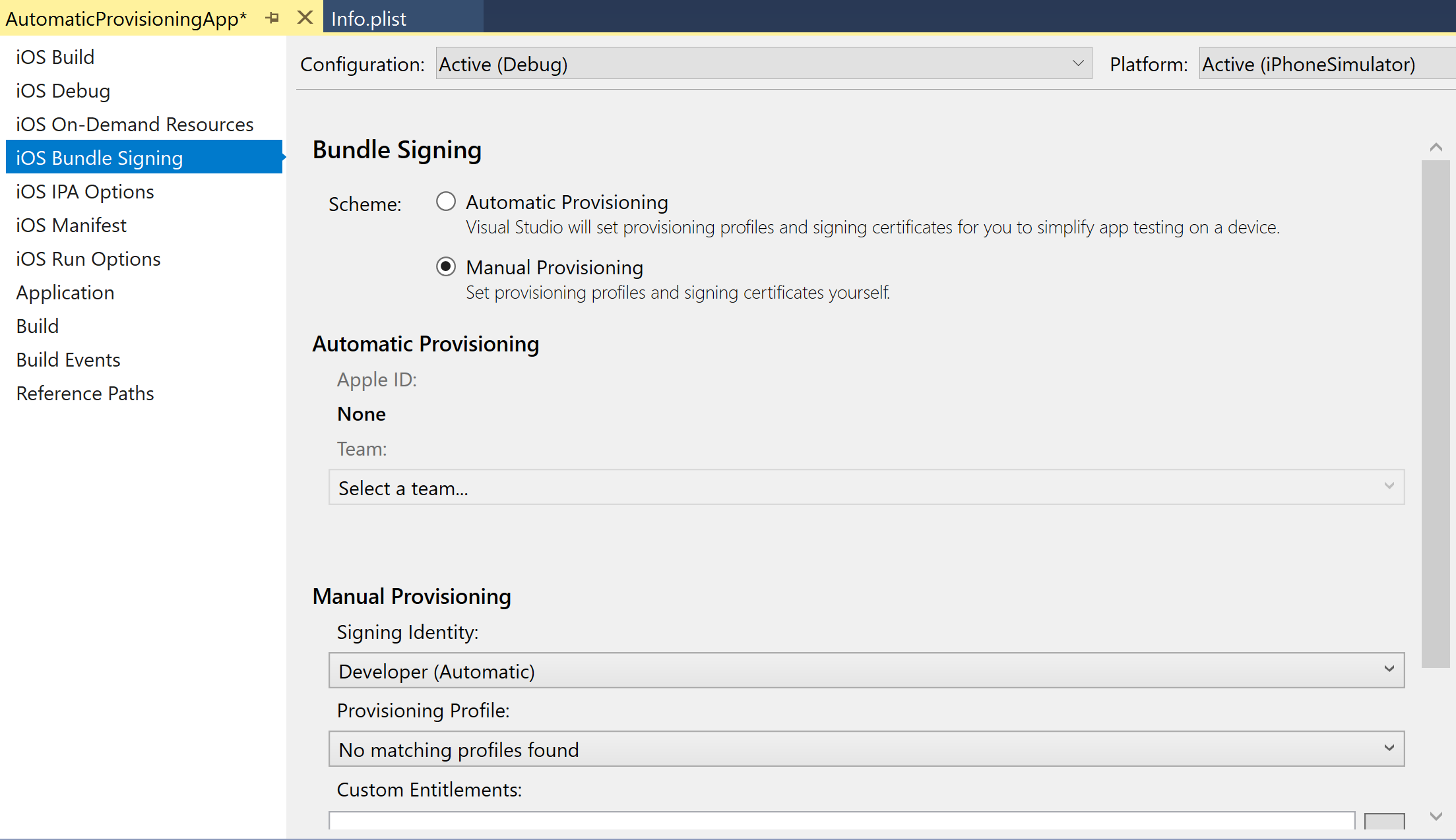 Then, select your team from the Team dropdown:

This starts the automatic signing process. Visual Studio then attempts to generate an App ID, provisioning profile, and a signing identity to use these artifacts for signing. You can see the generation process in the Build output:

When automatic signing has been enabled, Visual Studio updates the provisioning artifacts, if necessary, when any of the following things happen:

This blog post introduced the new automatic signing capabilities in Visual Studio 2017 15.7 Preview 3 and demonstrated just how quickly you can now deploy your iOS, tvOS, and watchOS apps to a device.

For more information on Device Provisioning, refer to our documentation on Setting up a device for development.

Community Books on Xamarin Development
Xamarin development is constantly growing and evolving to meet the needs of developers. To help you find the right resources for your development education, we’ve curated a list of community books written about Xamarin.