At //BUILD/, we announced the availability of Visual Studio 2015 Update 2 that includes a significant update to the tools for building Universal Windows apps. These tools now support building apps for many new classes of Windows 10 devices such XBOX, HoloLens, and Surface Hub (in addition to Phone, PC, and IOT). Today, we are releasing yet another update to the Universal Windows Platform (UWP) tools that includes our most significant update to .NET since the first release of these tools. You can install the latest tools by running Visual Studio 2015 setup and selecting the “Tools (1.3.1) and Windows 10 SDK (10586)” option under Universal Windows App Development Tools.

In this post, I’ll highlight some of the key updates for Universal Windows app developers in Visual Studio 2015 Update 2.

We appreciate all the feedback.NET UWP developers are sharing with us on dotnetnative@microsoft.com. Your feedback has helped us identify and fix critical issues in .NET Native. With Universal Windows App Development Tools (1.3.1), we are releasing an updated .NET Native toolchain with over 600 bug fixes to address issues that, mostly reported by customers. We have also made several optimizations to improve the build throughput for .NET Native compilation in VS. Check out the What’s new post on .NET Blog for details.

In addition, we are releasing the Microsoft.NETCore.UniversalWindowsPlatform 5.1.0 nuget package update for the .NETCore framework targeting Universal Windows Platform. You can download and reference the updated package in your UWP projects using the NuGet Reference Manager in Visual Studio.

Our recommendation is to use the latest .NET Native toolchain with Microsoft.NETCore.UniversalWindowsPlatform 5.1.0 nuget package for all your existing and new UWP apps.

On creating a new Universal Windows app project in Visual Studio 2015 Update 2, you can now specify the version of the SDK you are targeting, as well as the minimum version of the platform that your application requires to run on.

Target version specifies the version of the UWP platform that your project is targeting and therefore the set of APIs available to your app. Our recommendation is to choose the most recent Windows 10 (build: 10586) version possible to target the latest APIs in the platform.

Minimum version specifies the lowest version of the UWP platform your app can run on. Our recommendation is to choose Windows 10 (build: 10240) to target the widest range of Windows 10 devices that exist in the market.

Once you have created a project, you can also update the Target and Minimum version for your app using the project’s application properties.

With VS 2015 Update 2, if your app is already associated with the Universal Store, package wizard Studio will now persist the appx package configuration and will allow you to create an appx package for your UWP project without requiring you to sign-in again. 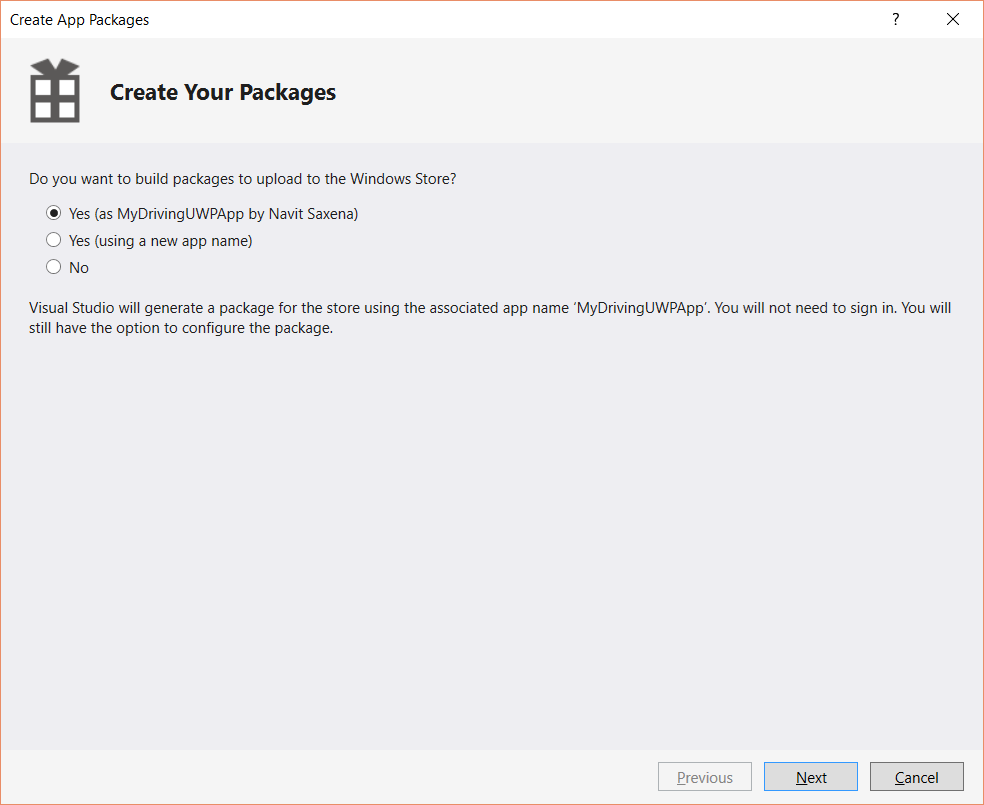 As always, we welcome your feedback. For reporting problems, please use the Report a problem option in VS. For suggestions, share your ideas through UserVoice.

Open Any Folder with Visual Studio “15” Preview
For developers to be truly productive in Visual Studio their code needs to be organized into Solutions and projects, right? For a long time, that was a core expectation ...