In this article I’ll talk about the information that needs to be specified by a product integrating with Visual Studio to make that product appear in the About box dialog, and the changes to these settings for Visual Studio 2010.

You are probably familiar by now with the layout of the Visual Studio’s About Box dialog. 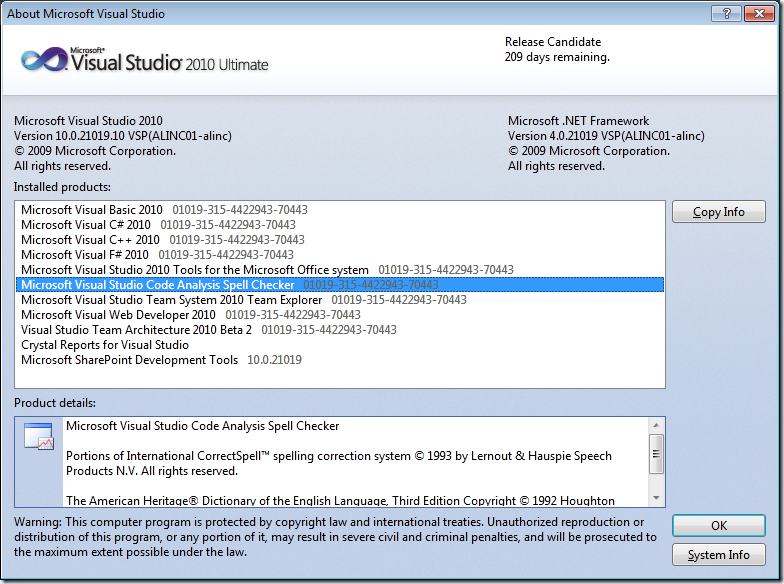 The product name and the identifier are mandatory for a product to be listed in the AboutBox. The details and icons are optional.

Installed products that want to have information displayed in About Box dialog in Visual Studio need to write a couple of registry keys under InstalledProducts key. The keys are read by VisualStudio when the AboutBox dialog is open, and based on these values further information may be obtained from the products resources or from the product’s packages.

E.g. for VS10 and x86 architecture the registry values needs to be written under a key like:

The {versionNumber} is the version of Visual Studio into which your product is integrating (9.0, 10.0, etc) and {yourProductName} is a registry key string under which detailed registry values will provide further details of the product.

Here is the list of the values that AboutBox reads:

There are 3 ways of declaring the information to be displayed in the About Box dialog:

As I mentioned before, using the IVsInstalledProduct interface is a convenient way to provide the product information for the about box dialog.

However, this has a big disadvantage: it requires the product’s package to be loaded, instantiated and sited. During the IVsPackage.SetSite() call a package usually performs initialization (like creating toolwindows, allocating memory and initializing global objects, etc), and may trigger additional packages being loaded by querying their services, which in their turn will require time for initialization and may trigger loading of other packages, etc.  All this takes time that’s not necessary for obtaining the about box registration information. It also has an impact on the memory used by Visual Studio (working set), because packages that are loaded are not unloaded until Visual Studio is closed.

In Visual Studio 2010 timeframe there were more packages added to VS and more products used the IVsInstalledProducts interface for declaring their AboutBox data. As result, on debug builds the time to open the dialog skyrocketed to 30-40 seconds(!). Something had to be done…

To fix the problem, the IVsInstalledProduct interface has been logically deprecated. All Visual Studio components had to change their about box registration data from using the interface (method 2) to declaring and using resource IDs (method 3).

If your product uses the interface, it will continue to work in VS10, but the recommendation is to change the product registration to declare resource IDs in registry instead.

This constructor allowed developers to use the IVsInstalledProduct interface for providing About Box registration data. However, Visual Studio packages generated with MPF Wizard passed a “false” value to the first argument and instead used explicit resource IDs; the necessary strings and product icon were also generated.

This constructor has been deprecated. If you retarget and compile and old SDK sample project against the newer Microsoft.VisualStudio.Shell.10.0.dll which defines the updated version of the class you’ll get a build warning or error (if warnings are treated as errors). To fix the error simply remove the first argument to InstalledProductRegistration’s constructor.

The current constructor of this class looks like this:

One other change to the class is that productDetails argument now accepts a (null) value, if you don’t want to provide additional details about your product.