As we were beginning the development of Visual Studio 2012, the user experience teams from across Microsoft worked together to align the design of our products and services around a set of core company-wide design principles that each product and service applied to their specific domain. Windows Phone 8, Windows 8, Office 2013, and Visual Studio 2012 were the first wave of releases to reflect these shared principles in their new designs.

Having a more unified and consistent experience is growing in importance as we increasingly interconnect the new device platforms, tools, and services we are introducing this year and beyond.

The principle that had the greatest impact on the visual design of Visual Studio 2012 is frequently abbreviated as “content before chrome.” Applied to a development tool like Visual Studio, this principle translates to giving the content being created/edited dominant screen real estate and visual prominence.

Driven by this principle, the primary changes made to the visual design of Visual Studio 2012 were:

Some of these changes to the user experience have been well received (or go largely unnoticed as a natural part of streamlining existing workflows). However, in some areas, we’ve received feedback that the changes in colors and designs went so far that they negatively impacted productivity and reduced the usability of the product.

In Visual Studio 2013 we are continuing to remain true to the Microsoft design principles while refining the VS 2012 visual design to address feedback and make improvements.

We have made broad but incremental changes, some of them subtle. Our overall aim is to have VS 2013 feel familiar to VS 2012 users, but better.

The changes are in the four primary areas which are explained and illustrated below.

Starting with Update 2 of Visual Studio 2012 and moving forward, there are three built-in Color themes: Blue, Dark, and Light. Our surveys tell us that there are very strong feelings about the color themes—there is substantial support for all three, with each theme having at least 25% of developers who prefer it.

In Visual Studio 2013, you will be able to choose your preferred color theme when you first launch. 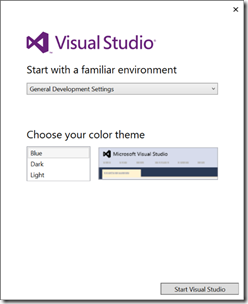 Working with the new connected IDE feature, the theme that you choose will be stored in the cloud in your Visual Studio account, and will roam to other Visual Studio 2013 machines you use. Of course, you can still change the theme via Tools > Options at any time.

In Visual Studio 2013 each of the three themes is on equal footing. You choose your theme once and then you’ll not need to set it again.

For the Light and Dark themes we have received feedback about insufficient contrast between areas of the IDE and about difficulty locating the separators between windows.

In Visual Studio 2013 the themes have been revised to address this feedback by increasing contrast in the color palette and with the introduction of more border line work highlighting the edges of content areas.

Based on your feedback, we have systematically added color to a large number of icons to increase their distinguishability and recognizability.

We have followed the icon color system diagrammed below, which uses accent colors in a consistent way while keeping them distinct from the colors used to draw attention to warnings/errors.

The additions to the color system in VS 2013 are primarily to the icons that include folders and to icons for save-related operations. 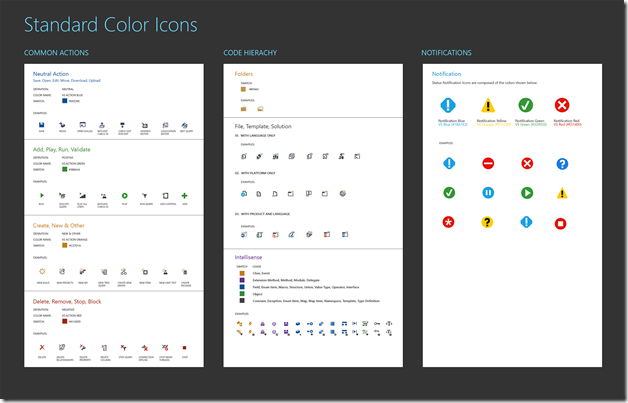 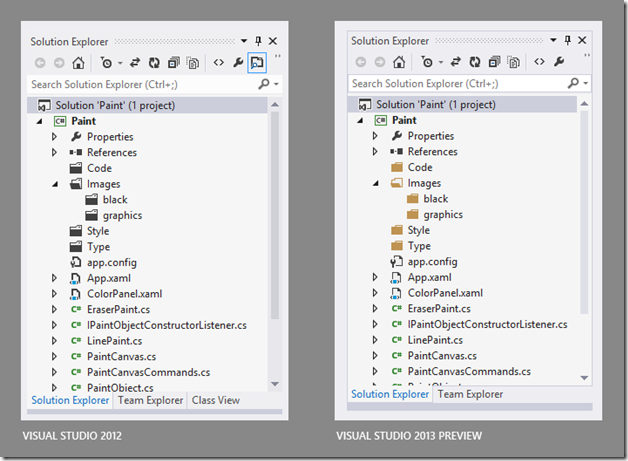 Feedback about the icons with rectangular shapes was they were too heavy, causing them to be hard to distinguish from one another. We have addressed this with a systematic redesign of the common square/rectangular icons.

For some families of icons we received feedback that they didn’t properly convey the intended concept, or were too visually similar at a glance to other icons in the product. Many of these icons have been redesigned, most notably the family of icons that are work item-related.

Thank you for all of the feedback you provided about Visual Studio 2012.

There are several convenient ways to provide feedback:

Visual Studio Blog
June 27, 2013
0 comment
Welcome. Sign in to Visual Studio.
Applications today are leveraging the cloud to deliver personalized experiences and offer new capabilities. So it’s no surprise the tool used to build those ...