Last month we invited everybody to try out their quantum programming skills in the second Q# coding contest. Now that it’s over, let’s take a look at how it went.

The first contest of the series was held in July 2018 (we might have mentioned it once or twice already…). A first-of-a-kind event is always very stressful – there is no prior experience to build upon, everything has to be figured out from scratch, and you don’t even know if anybody will be interested at all!

Turned out we didn’t need to worry about the interest – over 650 people from all over the world ended up joining the contest, the warmup round held the weekend prior to it, or both. We considered this a success and immediately started to plan for the next contest. In fact, we had several problems for the second contest drafted before the last T-shirt was shipped to the winners of the first one :-).

Second-of-a-kind events have their own set of challenges. We couldn’t just repeat what we have done the first time – we had to do better. For example, the first contest turned out to be too easy: a hundred participants solved all problems, and the fate of the T-shirts was decided in less than 24 hours since the start of the round, which is not great for a 3-day event.

Another thing we wanted to improve based on the feedback from the first contest was the scoring system – calculating the penalty as a sum of submission times penalized participants who couldn’t join the contest right at the beginning quite heavily, so we decided to switch to using the last submission time as the penalty.

On the brighter side, preparing the warmup round for the second contest was easier than for the first one: with both the first contest and the Quantum Katas providing plenty of practice problems, we only had to cover new types of problems in the warmup.

The winner solved all 13 problems in just under 5 hours. At this point we went through a brief phase of panic, worried that we had erred on the side of making the problems too easy again. However, it took the runner-up over 12 hours to secure their second place, and the third place wasn’t decided until the 21st hour of the competition. In the end 24 participants managed to solve all problems (the last of them less than 4 hours before the contest ended), so one could win a T-shirt even without solving everything.

A total of 358 participants joined the contest, the warmup round, or both.

You can find the full results of the contest here.

Short-term goal 1: add the contest problems to the Quantum Katas for practice.

Short-term goal 2: ship the T-shirts to the contest winners. 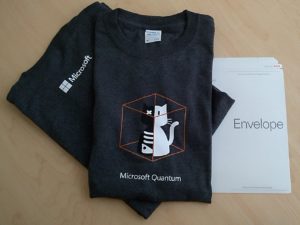 The Women of QuArC
International Women’s Day is a day to celebrate the women in our life. That includes the amazing women in our group who, among other things, work to shape the Quantum Development Kit and to bring you these awesome tools for quantum programming. Without further ado, allow me to introduce them to you – in their own words.

Mariia Mykhailova
March 29, 2019
0 comment
Solve the Quantum Katas Online with Jupyter Notebooks
We present the first batch of Quantum Katas - self-paced tutorials for learning quantum computing and Q# - in Jupyter Notebook format. Now you can solve the tasks from the tutorials in your browser without having to install any extra software.