To get started download the remote extension pack, check out the Visual Studio Code Remote documentation, and dive right in! Check out the video below for a quick tour and keep on reading to learn more!

The ability to work with WSL and remote Python interpreters have long been the top requested features on our Python Extension GitHub page. We have heard from our Python users many different reasons why they need to work in remote workspaces: in the case of SSH their code needs access to large amounts of data, compute, GPUs, or other resources; with Docker they need to be able to create and switch between development environments with complex dependencies; and with WSL they may need tools and packages that are only available in a Linux environment.

With remote development, we’ve enabled all of these scenarios with remote Python interpreters and more: Visual Studio Code’s UI runs on your local machine and connects to a remote server which hosts your extensions remotely. This enables features like auto-completions, debugging, the terminal, source control, extensions you install, almost everything in Visual Studio Code runs seamlessly on the remote machine as if it was your local development workspace.

Docker containers are a popular way to create reproducible development environments without having to install complex dependencies on your local machine. This also allows new team members to reproduce your environment by installing docker and opening your workspace in Visual Studio Code.

To get started developing in a docker container, run the Remote-Containers: Open Folder in Containers… command and then browse to a folder on your local machine. If a .devcontainer folder is found in the workspace root, Visual Studio Code will create the dev container use the existing dev container definition.

If no container definition exists, you will be prompted to create a new dev container for that workspace. We have built-in definitions for Python developers that let you get started with Python 2/3, Python3+Postgres, Miniconda, and Anaconda: 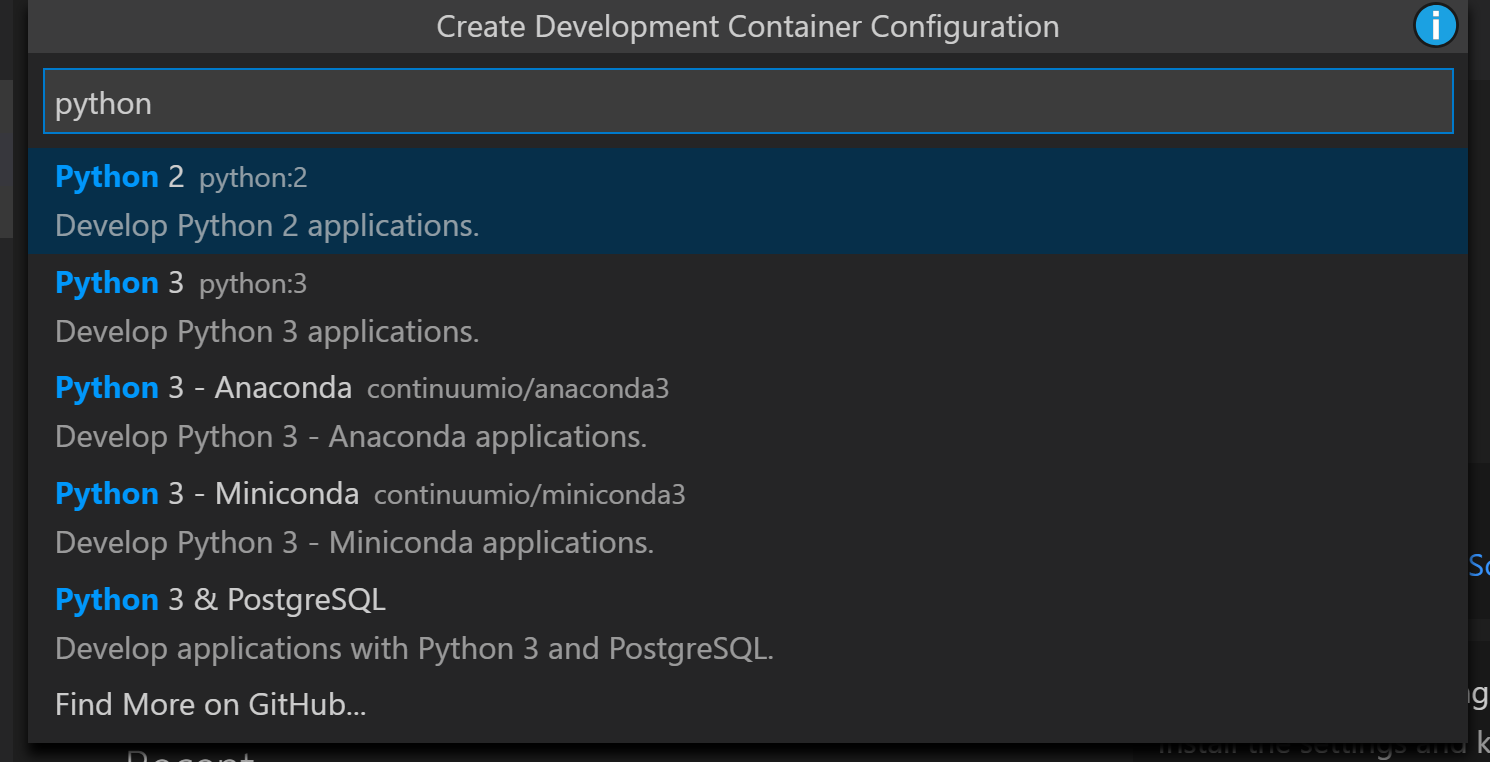 Your files are volume-mounted into the container so you can open files, and start editing code and get IntelliSense and auto-completions: 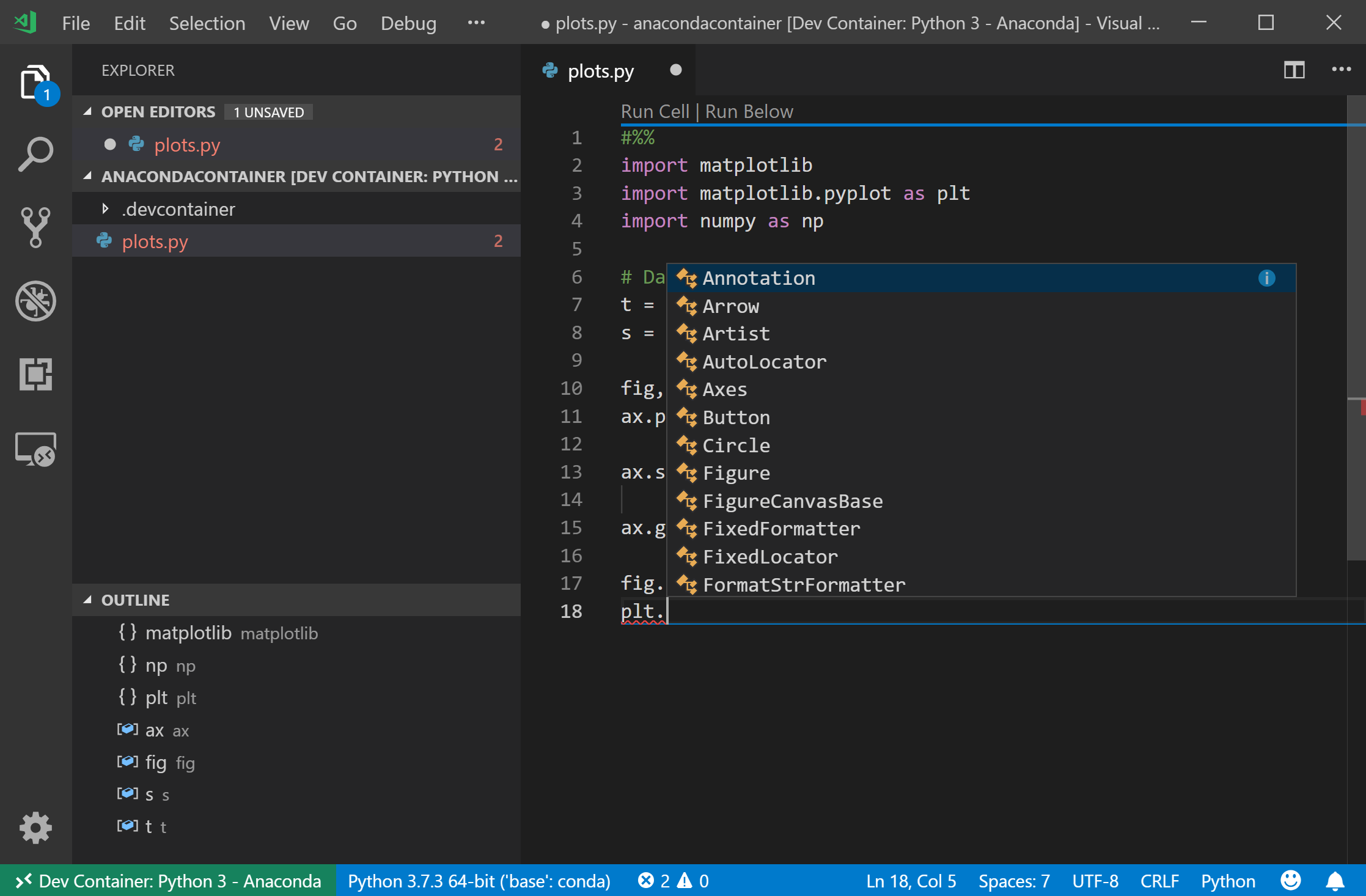 You can start debugging, set breakpoints and step through code: 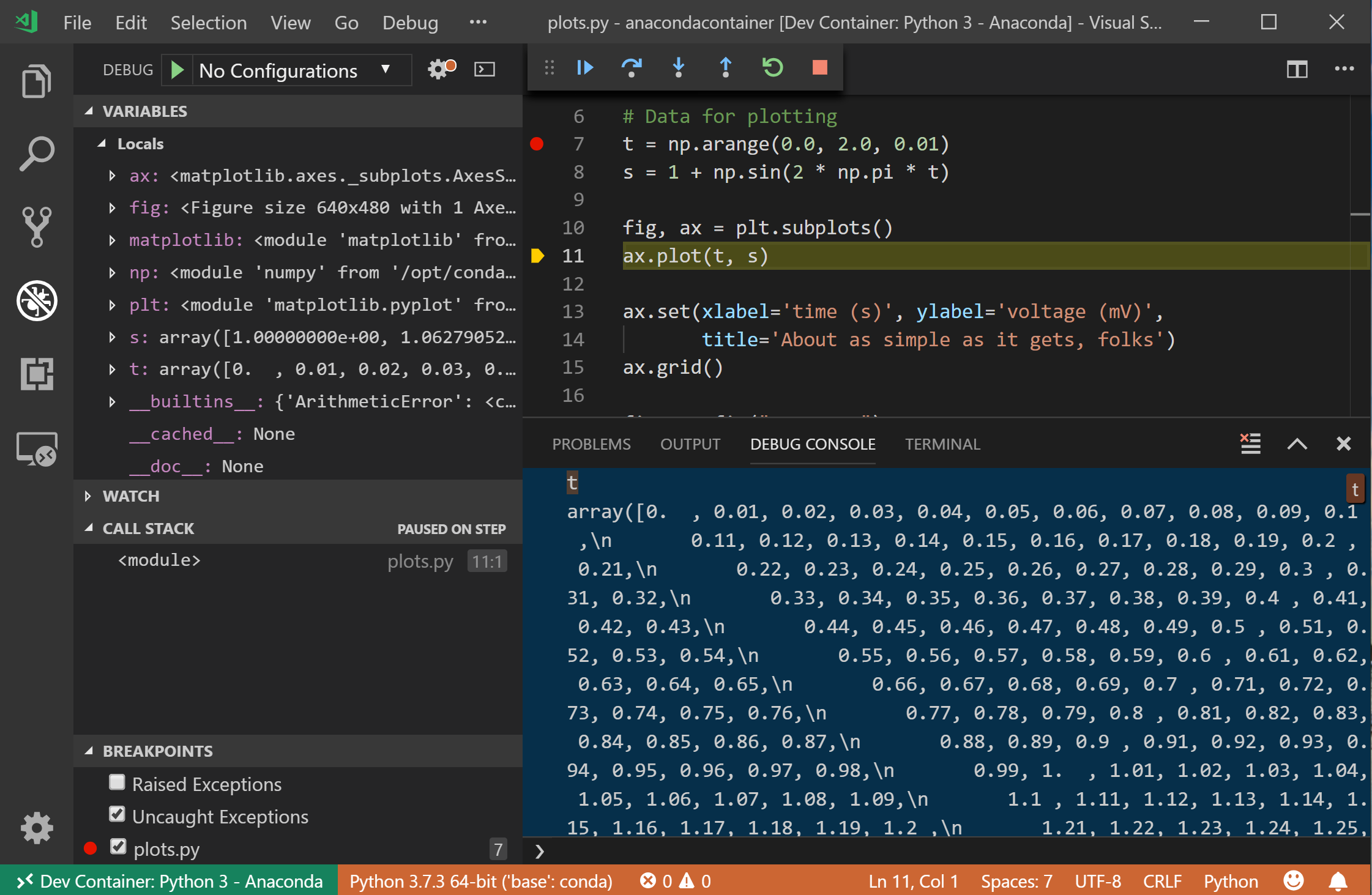 You can run cells and view graphical output in the Python Interactive window: 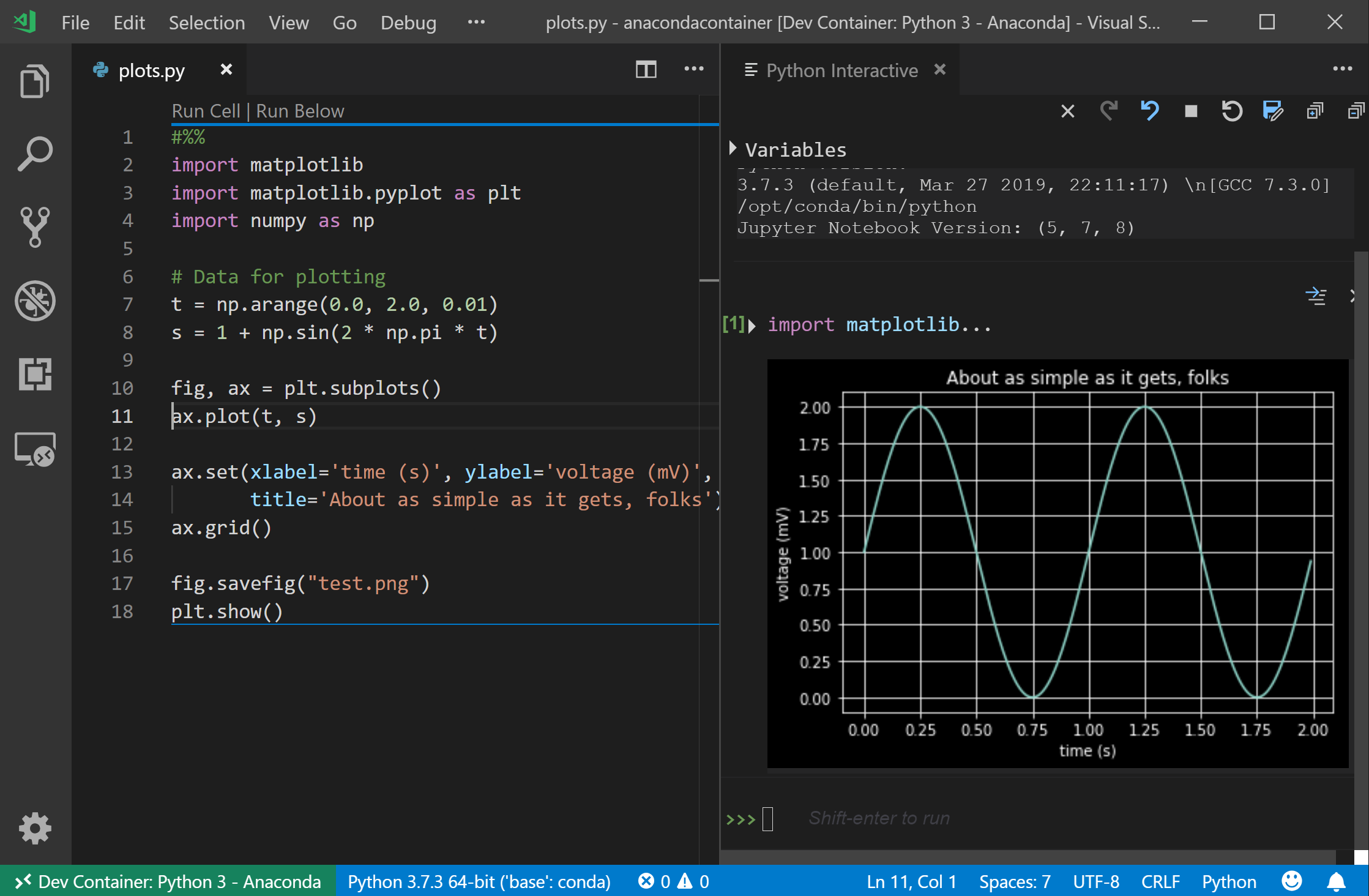 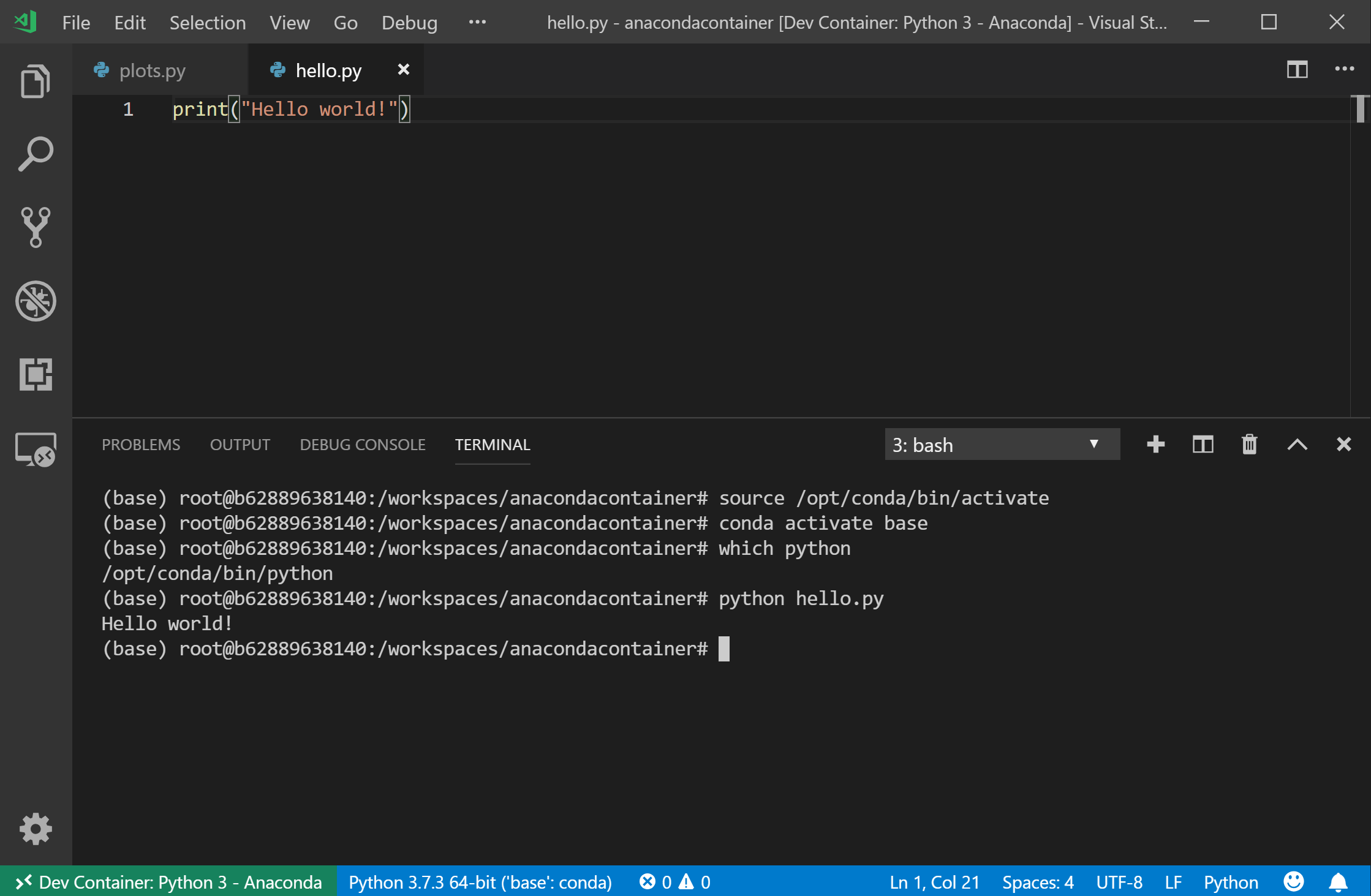 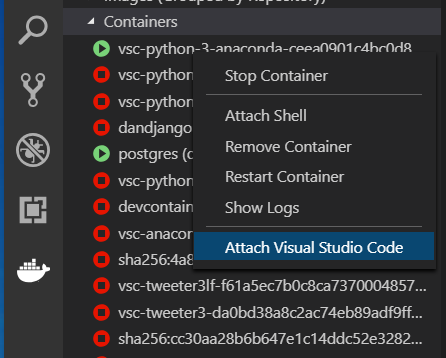 When attaching to an existing container you may be missing some dependencies used by Visual Studio Code, so if you run into issues check our sample container definitions in our vscode-dev-containers repo for dependencies to add to your Dockerfile.

If you want to get back to the normal local view, you can run the Remote-Containers: Reopen Folder Locally command. All your changes are saved to your workspace via a volume mounted drive and so will be available in the local view.

Another common setup Python developers have is that their development environment is running on a remote machine, often because the remote machine has access to resources or data sets that are not available on the local machine. Like the docker scenario, you can use the “Remote-SSH” extension to open a remote workspace over an SSH connection.

To get started, first ensure that you can ssh to the remote machine from the command line, and then run Remote-SSH: New Window and enter the SSH host you wish to target:

If you configure SSH hosts, they will be readily available in the Remote SSH activity bar for easy connection: 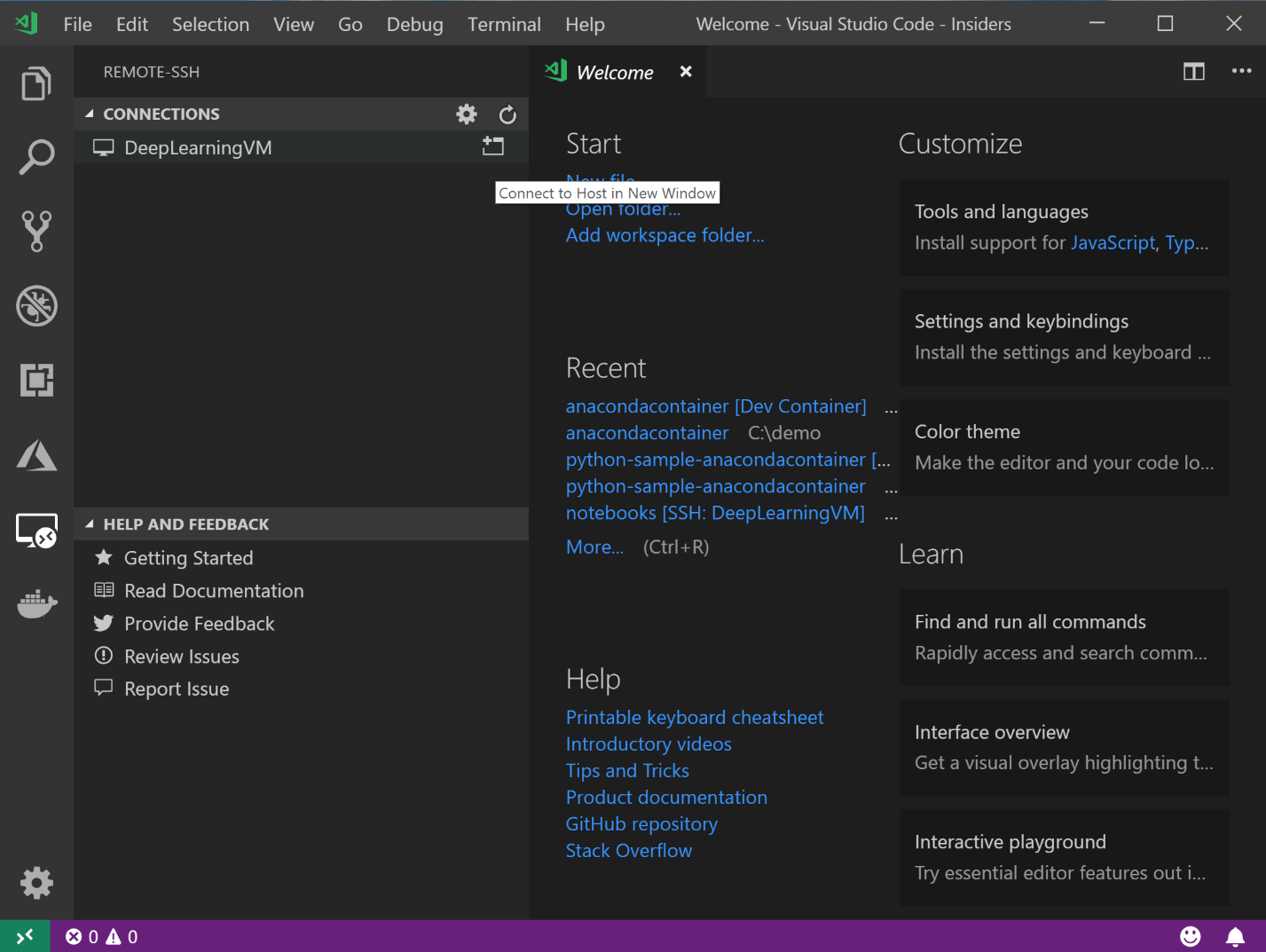 Visual Studio Code will re-open and then install the remote server on the SSH host. You can then open a folder on the remote machine: 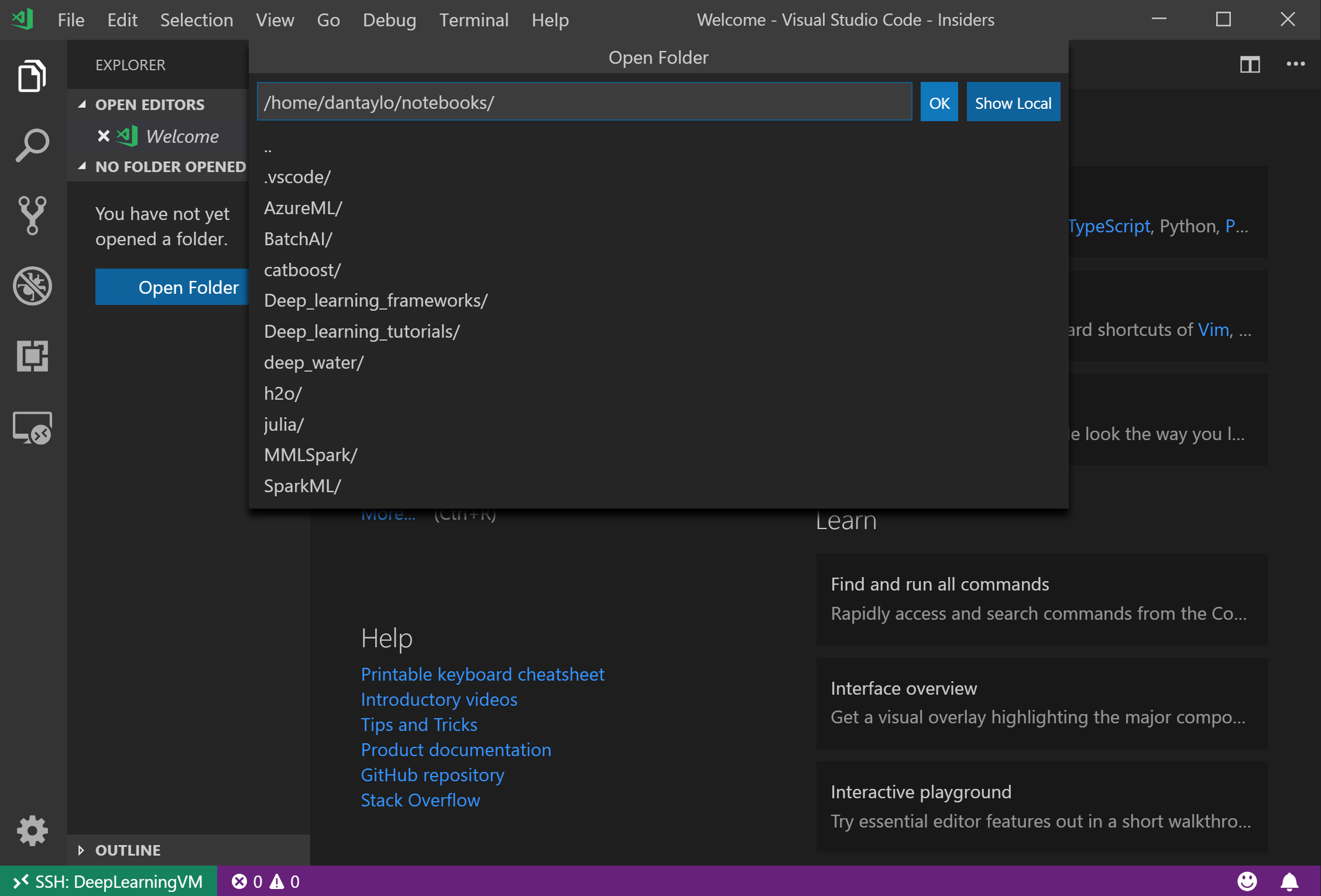 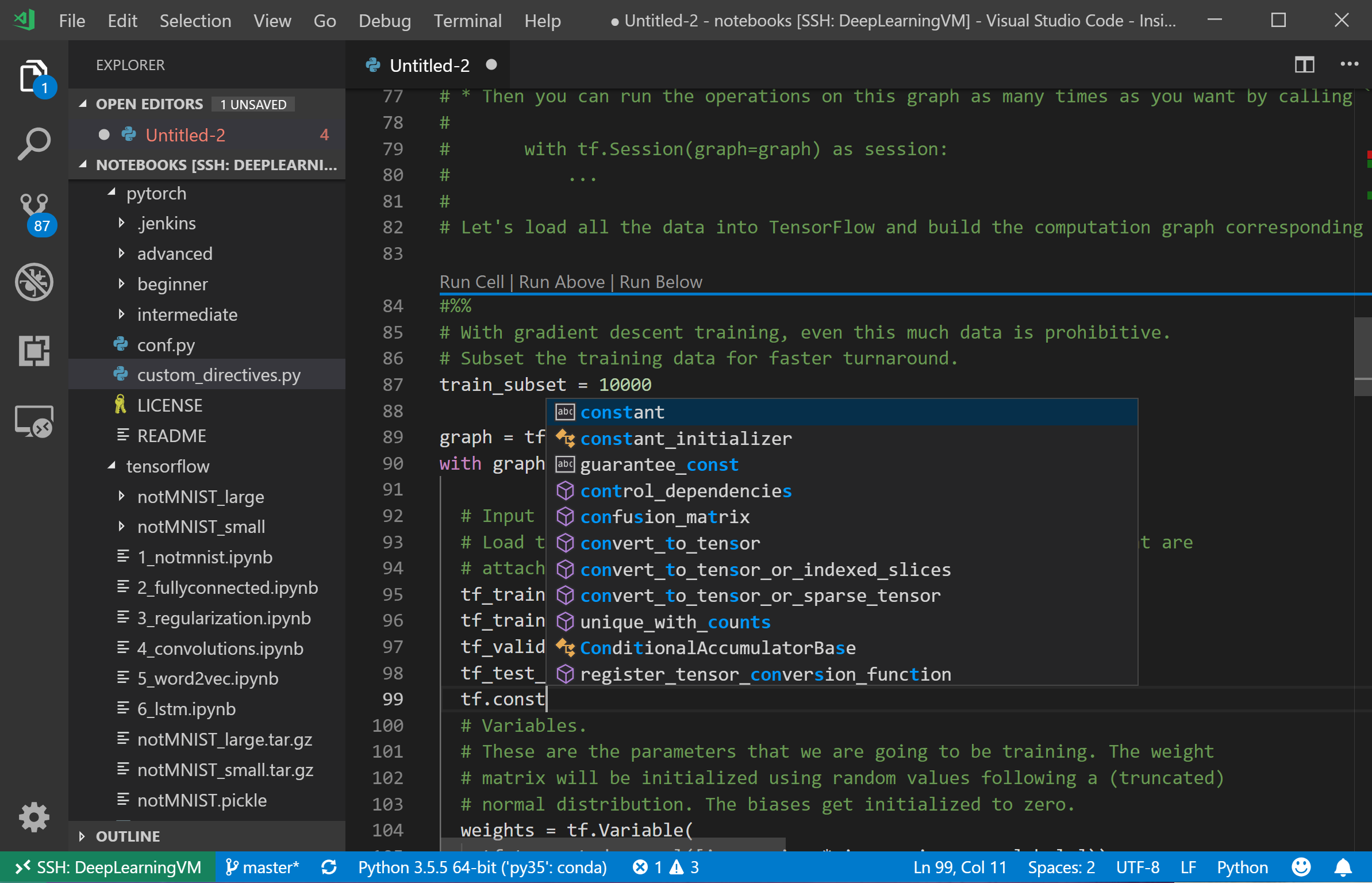 To get started with Remote WSL, run the Remote-WSL: New Window command:

You can click on Open folder… and it will allow you to open a folder in the Linux file system: 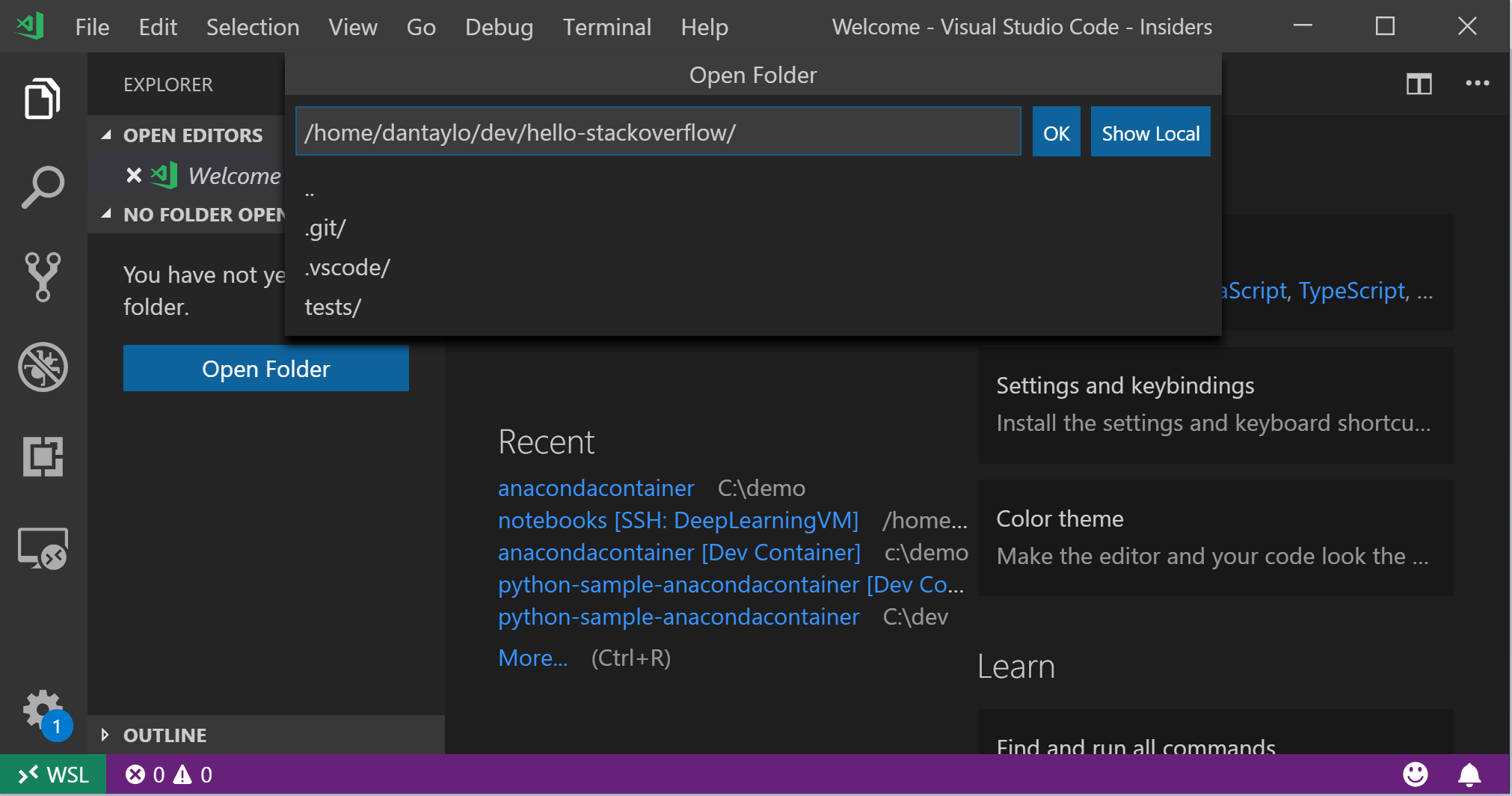 Alternatively, you can open a folder in WSL directly by from the wsl prompt by typing “code-insiders .”.

You can then create files, edit code, open a WSL terminal, and debug just like the other remote development environments: 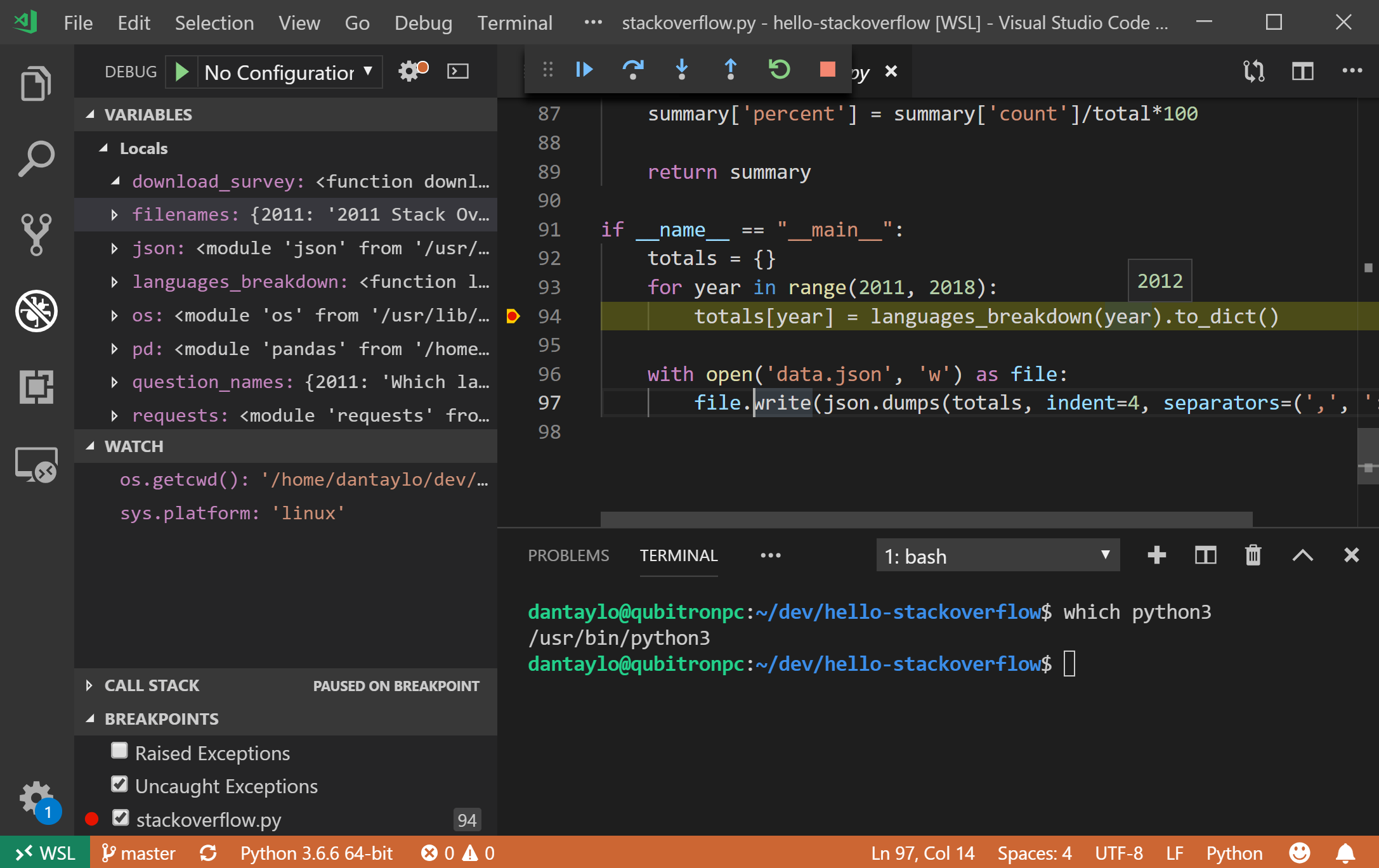 Be sure to let us know of any issues or feedback on the remote extensions by filing issues on our vscode-remote-release GitHub page.

Steve Dower
May 21, 2019
70 comments
Python in Visual Studio Code – May 2019 Release
We are pleased to announce that the May 2019 release of the Python Extension for Visual Studio Code is now available. In this release we closed a total of 42 issues including IntelliSense in the Python Interactive Window and additional improvements to the Python Language Server. Check out the full list of improvements in our changelog.