In this release we focused mostly on product quality. We closed a total of 60 issues, 39 of them being bug fixes. However, we’re also pleased to deliver delightful features such as:

We’re excited to announce that we have brought the magic of automatic imports to Python developers in VS Code by way of an add imports quick fix. Automatic imports functionality was one of the most requested features on our GitHub repo (GH21), and when you enable the Microsoft Language Server, you will get this new functionality. To enable the Language Server, add the setting “python.jediEnabled”: false to your settings.json file.

The add imports quick fix within VS Code is triggered via a code action lightbulb. To use the quick fix, begin typing a package name within the editor for which you do not have an import statement at the header of the file. You will notice that if a code action is available for this package (i.e. you have a module installed within your environment with the name you’ve supplied), a yellow squiggle will appear. If you hover over that text, a code action lightbulb will appear indicating that an ’import’ code action is available for the package. You’ll see a list of potential imports (again, based on what’s installed within your environment), allowing you to choose the package that you wish to import.

The add imports code action will also recognize some of the most popular abbreviations for the following Python packages: numpy as np, tensorflow as tf, pandas as pd, matplotlib.pyplot as plt, matplotlib as mpl, math as m, scipy.io as spio, and scipy as sp.

Make sure you have linting enabled since this functionality is tied to the Language Server linting capability. You can enable linting by opening the Command Palette (View > Command Palette…), running the “Python: Enable Linting” command and selecting “On” in the drop-down menu.

The Notebook Editor and the Python Interactive window now both support rendering plots built with Altair,  a declarative statistical visualization library for Python. 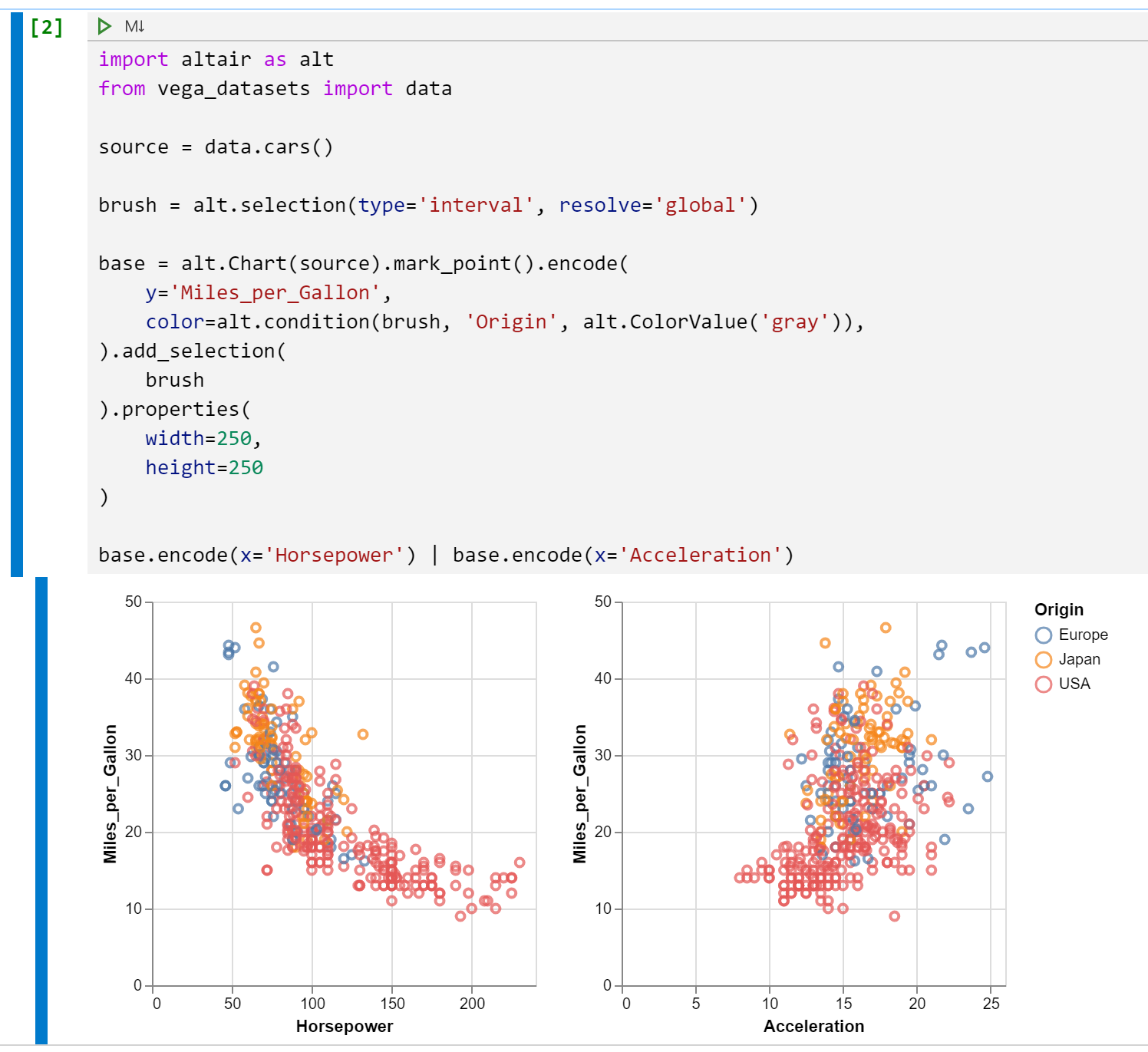 Line Numbers in the Notebook Editor

Line numbers are now supported in the notebook editor. On selected code cells, you can toggle the line numbers by pressing the “L” key.

We are continuing to A/B test new features, so if you see something different that was not announced by the team, you may be part of the experiment! To see if you are part of an experiment, you can check the first lines in the Python extension output channel. If you wish to opt-out of A/B testing, you can open the user settings.json file (View > Command Palette… and run Preferences: Open Settings (JSON)) and set the “python.experiments.enabled” setting to false.

Python in Visual Studio Code – January 2020 Release
We are happy to announce that the January 2020 release of the Python Extension for Visual Studio Code is now available. This release includes Kernel selection in Jupyter notebooks, performance improvements of Jupyter notebooks editor , auto-activation of the terminal on load (thanks Igor Aleksanov!) and fixes to rebuilding ctags.

Luciana Abud
January 7, 2020
6 comments
Python in Visual Studio Code – February 2020 Release
We are pleased to announce that the February 2020 release of the Python Extension for Visual Studio Code is now available. In this release we closed 66 issues, including a much faster startup of Jupyter Notebook editor and scaling back of configuration notifications. Keep on reading to learn more!