We’re thrilled to announce that Pylance is now the default language server for Python and is bundled with the core Python extension as an optional extension starting with this release. Other notable updates are that we now have faster extension startup time and a new debugger feature: live reload for Python scripts.

Today, we’re excited to announce that the Python extension’s default language support is now powered by Pylance. This upgrade provides what we believe is the most performant and user-friendly Python editing experience for Visual Studio Code ever. If you’re unfamiliar with Pylance, you can read more about its awesome features in the preview release announcement blog post.

If you’ve been following along with our releases over the last year, we’ve been making dramatic improvements to Python language support via the Pylance extension. As of this release, we’ve included the Pylance extension as an optional dependency for the core Python extension. This means that you’ll get the latest and greatest language support right out of the box with the Python extension (no separate install needed!).

We believe that Pylance provides the very best user experience for Python development and we hope that you’ll try it out. However, we are committed to making sure that you can configure your development environment exactly how you like it.

With this top of mind, our team has also been working to make language support better for everyone, regardless of your language server. We’ve invested resources to standardize the way that language servers communicate with the Python extension (via Language Server Protocol). This work has enabled us to further improve the performance and overall experience of other language servers, like the open-source Jedi language server (thanks to David Halter, Samuel Roeca and danixeee for their cooperation and partnership!). We are committed to maintaining open-source language support options for our users in the future.

If you’d like to use another language server (e.g., Jedi),  you can uninstall or disable the Pylance extension at any point. Once you uninstall Pylance, it won’t be installed again when the Python extension updates.

You can also change your language server explicitly via the settings UI or in your settings.json.

Our team has been working hard on improving stability and performance of the Python extension, and we are now thrilled to announce that starting in this release, the Python extension will be loading much faster and more reliably thanks to a major improvement on our Python environments discovery mechanism.

This improvement has been showing 10% faster load times for Windows and macOS users, and 20% faster for Linux users! We’ve also seen that it is decreasing the number of times the Python extension becomes unresponsive by 15% across the board.

If you used to have issues with the Python extension not loading when on a machine with many Python environments, try this newest version and let us know how it works for you!

With this update, we also included a refresh button on the topwhen you run the “Python: Select Interpreter” command. This way you can make sure the list you are looking at is up to date:

Debugging with the Python extension has gotten even better! If you ever made changes to your code after the debugger execution has hit a breakpoint, and you wished those changes were applied without the need of reloading the debugger, this update is for you!

Our debugger has support for Django and Flask auto-reload for over a year now. We’re excited to bring support for code reload of Python scripts as well!

With this change,  your changes will be applied after the debugger has already started executing and has hit a breakpoint, without the need to restart the debugger:

If you want to try it out, you can add the following line to your debug configuration in the .vscode/launch.json file: 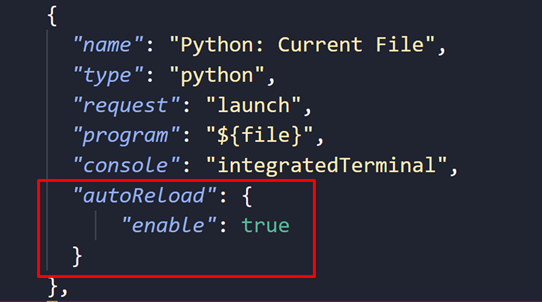 Note that when the debugger performs a reload, code that runs on import may be executed again. To avoid things happening twice, try and only use imports, constants, and definitions in your module, and put all code into functions or if __name__ == “__main__” checks, like in the example below:

Other changes and enhancements

The Pylance language server has reached stable!
We’re excited to announce that Pylance, our fast and feature-rich language support for Python in Visual Studio Code, is now officially out of preview and has reached its first stable release. Keep reading to learn more!