Did you know that NORAD tracks Santa Claus?  Every Christmas Eve the North American Aerospace Defense Command tracks Santa’s journey around the world, answering phone calls and posting location updates at www.noradsanta.org.  The NORAD Tracks Santa website is visited by millions of people around the world during a span of less than 24 hours.  To ensure the website is highly available, and globally distributed, NORAD relies on Azure.

In 2018, the NORAD Tracks Santa Azure architecture underwent a significant change.  We migrated from Infrastructure-as-a-Service (IaaS) virtual machines, strategically distributed throughout the world, to a serverless Platform-as-a-Service (PaaS) approach.  In 2019, we continued our PaaS updates by replacing Azure Traffic Manager and the Verizon Premium CDN with Azure Front Door.  Front Door is Azure’s globally distributed Application Delivery Network as a service.  We made the decision to use Front Door because of its global availability, Azure CDN integration and near real-time failover capabilities.  Front Door also reduced the number of individual PaaS services required to operate the Santa Tracker web application by providing a single service that handles layer 7 load balancing, end to end SSL management, URL rewriting and CDN configuration.  Because Front Door integrates easily with Azure Storage and Azure Functions, we were able to make the needed architectural changes in less than 1 day, which provided ample time for testing and validation before making our final decision to adopt Front Door.

While the team appreciated the simplicity that Front Door provides, it also had to be performant and able to withstand the heavy traffic experienced on Christmas Eve.  I’m happy to report that Front Door was up to the challenge.  On Christmas Eve, the NORAD Tracks Santa website received 51 million pageviews with an average response time of 109 milliseconds.  The site was visited by people around the world.  The top 6 countries, by pageviews, were the United States, United Kingdom, Canada, Japan, Ireland and Chile.  The development team did not need to worry about where traffic was coming from because Azure Front Door integrates with the Azure CDN and ensures our content is distributed to all Azure CDN points-of-presence. Our Azure Functions API received 129.8 million requests in the same period with an average response time of 5.89 milliseconds.  We used Azure Front Door to provide a consistent endpoint for our Azure Functions API.  This approach allowed us to create Azure App Service Plans around the world for hosting our API while using Front Door as the single point of entry for making API calls.

If you are wondering about all the services needed in Azure to track Santa Claus, the list is surprisingly short.  The website, including games and media, is hosted in Blob Storage.  The API is hosted as Azure Functions.  Application Insights and Log Analytics provide metrics.  Azure DNS handles domain name configuration and Azure Key Vault stores needed certificates and secrets.  Finally, Azure Front Door ties everything together into a system capable of handling high traffic volume regardless of where in the world the requests originate.  The image below is a simplified version of our NORAD Tracks Santa architecture.  The services seamlessly integrate to provide a globally available web application that can withstand millions of requests per hour and serve content to users around the world.

Below is an architectural diagram for Santa Tracker, Happy Holidays! 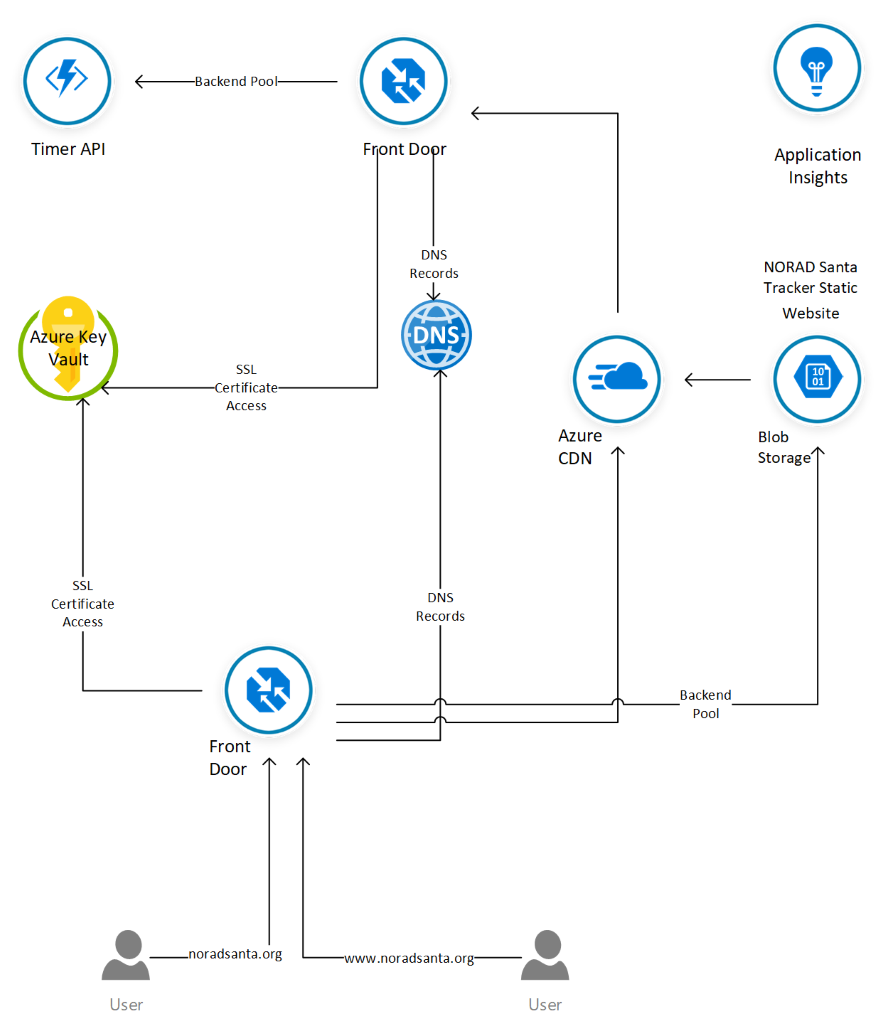 Making the Transition: The key differences between university and working in the industry
Premier Developer Consultants, Ashley Shorter & Tamar Zamba, describe the experiences, challenges, and lessons of going from undergrad to Microsoft Consultant.

Premier Developer January 7, 2020
0 comment
Mindset & Culture at Microsoft
For a few days afterwards that moment kept replaying in my head making me think about the mindset and culture of a company like Microsoft. How being part of a community of learners who are encouraged to “stretch” one’s skills and experiences really does make a difference both personally and professionally.