The danger of TaskCompletionSource

… when used with async/await.

TaskCompletionSource<T> class is a very useful facility if you want to control the lifetime of a task manually. Here is a canonical example when TaskCompletionSourceis used for converting the event-based asynchronous code to the Task-based pattern:

Effectively, TaskCompletionSource<T> represents a future result and gives an ability to set the final state of the underlying task manually by calling SetCanceled, SetException or SetResult methods.

This class is very useful not only when you need to make an old code to look modern and fancy. TaskCompletionSource<T> is used in a variety of cases when an operation’s lifetime is controlled manually, for instance, in different communication protocols. So, let’s mimic one of them.

Let suppose we want to create a custom database adapter. The adapter will have a dedicated “worker” thread for processing requests and ExecuteAsync method that a client can use to schedule work for background processing. This is quite similar to what an actual Redis client does and some other database clients follow the same pattern, so this is not a far-fetched scenario.

The code is not quite production ready, but its a good example of a producer-consumer pattern based on BlockingCollection.

Suppose we have another component, let’s say a logger. A logger is usually implemented using the producer-consumer pattern as well. For performance reasons, we don’t want to flush the messages on each method call, and instead we can use a blocking collection and a dedicated thread for saving data to external sources. And one of the external sources could be a database.

The logger’s implementation is extremely naive and by all means, you should not write yet another logger yourself. My goal here is to show how two producer-consumer queues may affect each other and the logger is quite a widely spread concept that is easy to understand.

The question is: can you see the issue here? Like a really serious issue!

We never save “Another string” into the database. Why? Because the database facade’s thread is blocked by the logger’s thread.

TaskCompletionSource type has a very peculiar behavior: by default, when SetResult method is called then all the task’s “async” continuations are invoked … synchronously. That’s what happening in our case (the same is true for SetCancelled, SetException, as well as their TrySetXXX counterparts): 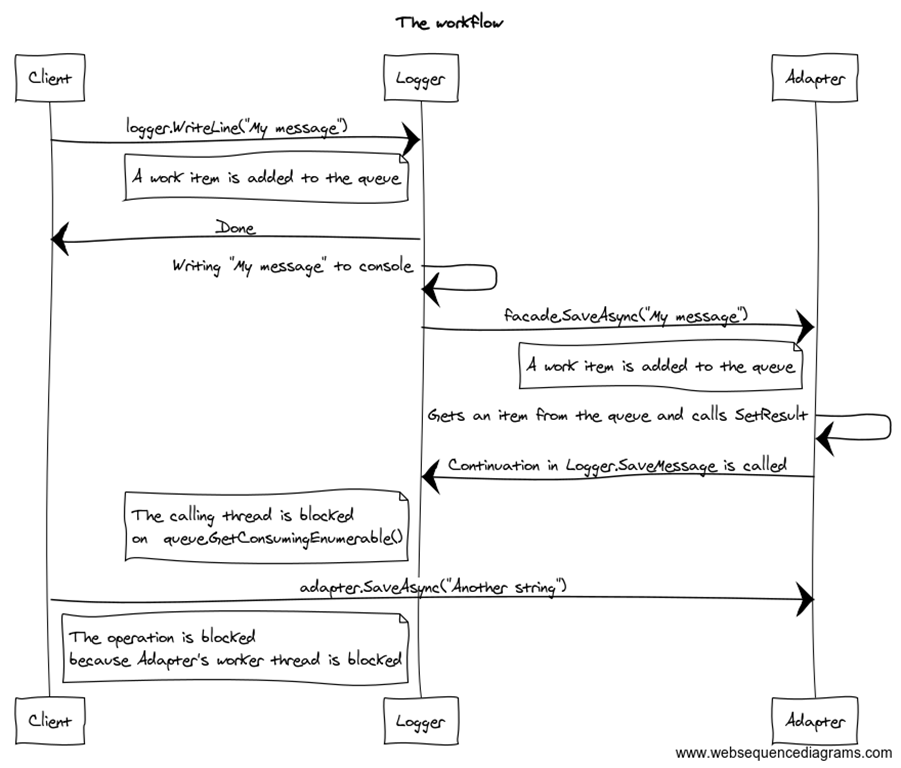 It means that the two “queues” are implicitly linked together and the logger’s queue blocks the adapter’s queue.

Unfortunately, the situation like this is relatively common and I’ve faced it several times in my projects. The issue may occur when “a continuation” (*) of a task, backed by TaskCompletionSource<T>, blocks the thread in one way or another, thereby blocking a thread that calls SetResult.

(*) As we’ll see in a moment different types of continuations behave differently.

The main challenge with such issues that it’s very hard to understand the root cause. Once you have a dump of a process from a production machine you may see no obvious issues at all. You could have a bunch of threads waiting on kernel objects without any relevant user’s code in any of the stack traces.

Now let’s see why this is happening and how can we mitigate the issue.

Obviously, we’re interested in the latter aspect and we’ll see at the moment how you can specify this flag. But to fully understand the issue we need to look at the other aspect as well: we need to understand task continuations.

You may think that the two implementations are equivalent because the compiler just “moves” the block of code between await statements into a continuation, scheduled via ContinueWith. But this is only kind-of true and the actual logic is a bit more involved.

An actual transformation that the C# compiler does for async methods is described in more details in my other post “Dissecting async methods in C#” and here we’ll focus on one particular aspect: continuations scheduling.

In a common case (more details later) a System.Action instance is added as a task continuation and the continuation is stored in Task.m_continuationObject.

Now, let’s see what is happening when a task is finished (code snippet from Task.FinishContinuations):

FinishContinuations method checks the task creation flags and if RunContinuationsAsynchronously was not specified then it runs a single action continuation synchronously! The behavior is different for async/await and for task.ContinueWith cases. A continuation of the async method is invoked synchronously unless the task is finished (**), synchronization context or non-default task scheduler are used. It means that an “async” continuation runs synchronously almost all the time when the awaited task is not finished!

(**) This is kind-of a rare race condition. If an awaited task is finished at ‘await site’ (like at await finishedTask) then an async method continues it’s execution synchronously. This situation is only possible when a task is finished in the middle of a MoveNext call of a generated state machine.

We can actually check that the issue we faced at the beginning has nothing to do with TaskCompletionSource per se and actually manifests itself with any tasks created without TaskCreationOptions.RunContinuationsAsynchronously:

As we can see, the block between await statement and the rest of the method runs synchronously in the same thread that runs Task.Run. But the continuation scheduled with task.ContinueWith runs asynchronously in a different thread. We can change the behavior by using Task.Factory.StartNew and providing TaskCreationOptions.RunContinuationsAsynchronously:

How to solve the issue?

As we discussed already, there are two pieces involved here: 1) task creation options that control how to run continuation (synchronously, if possible, by default) and 2) a type of continuation.

There is nothing you can do to control the behavior of async/await. If you can’t control a task’s creation but want to run the continuations asynchronously you can explicitly call Task.Yield() right after await or switch to custom tasks altogether (which is hardly an option).

But if you can, you should provide task creation options every time you use TaskCompletionSource<T>:

Solving What’s Off About Monolithic Applications
It's all about the people. The resistance to change is human nature. Leaders and team members alike. Assessing the team is simple. If they can demonstrate an openness to changing how they do things you are on track. If team conversations consist of why things must continue to be done the way they are being done success will be a challenge. But leadership is the real key. Effective change is a collaborative process and management's primary team facing role is keeping the team within the agreed upon boundaries. But of equal importance is securing and managing executive sponsorship. The team is pushing hard against their own instincts for the betterment of the organization. The organization must support them and insulate them from organizational winds that look to disrupt their efforts.

Developer Support
October 2, 2018
0 comment
Azure AD App Tracking with Logic Apps
Recently, I was asked by a customer with a very large internal Azure user base to help them find a way to keep track of Azure AD (AAD) application registrations in their directory. This customer has been on Azure for years, and the number of AAD application registrations has steadily grown during that time. There are so many applications now that it is hard for them to know which ones are still being used, and which are not. Furthermore, it’s common for application teams to create a secret key for their application and then forget that the key will eventually expire. How does the operations team know whom to contact when the expiration date is approaching?