Previously, script debugging in Windows PowerShell was limited to scripts running on the local machine. If you tried to set script breakpoints in a remote session it caused an error. Now, in Windows PowerShell 4.0, you can set breakpoints in remote sessions and debug remote running scripts in the console in just the same way you debug local running scripts.

Script debugging in the Windows PowerShell console always begins in the same way. You use the Set-PSBreakpoint cmdlet to set a line, command, or variable breakpoint in a script and then run the script. When the breakpoint is hit, script execution stops and the console transitions into debugger mode. The command prompt changes to indicate that the console is in debug mode and, from this prompt, you can execute debugger commands such as help (‘h’, ‘?’), list source (‘list’, ‘l’), show call stack (‘k’), and execution resume commands (continue, stepInto, stepOut, etc.). You can examine script variables by typing the variable name and even run new commands or script at the debug prompt, all while stopped in the debugger.

Example 2: Create a new remote session and enter into an interactive session with it

There is one significant difference between local script and remote script debugging. When stopped in the debugger during remote script debugging, debug and output data from the remote session arrive at the client through separate and unsynchronized streams. Because we didn’t want the output data to overwrite the prompt or other debugging information, Windows PowerShell suppresses script output data while the debugger is in stop mode. The downside is that some script output might arrive later than expected.

For example, if you step over a statement that generates output, you might not see that output at the next debugger stop. Instead you will see it after you step through one more statement.

Here are a few detailed examples to show you how remote debugging works.

In Windows PowerShell 3.0, a remote session can be disconnected in one of two ways. The first is a manual disconnect that you initiate by using the Disconnect-PSSession or Invoke-Command -InDisconnectedSession cmdlet. The second is through robust connections auto-disconnect. That is if a network connection is lost in a session that session is automatically disconnected after 4 minutes of trying to re-establish the network connection. 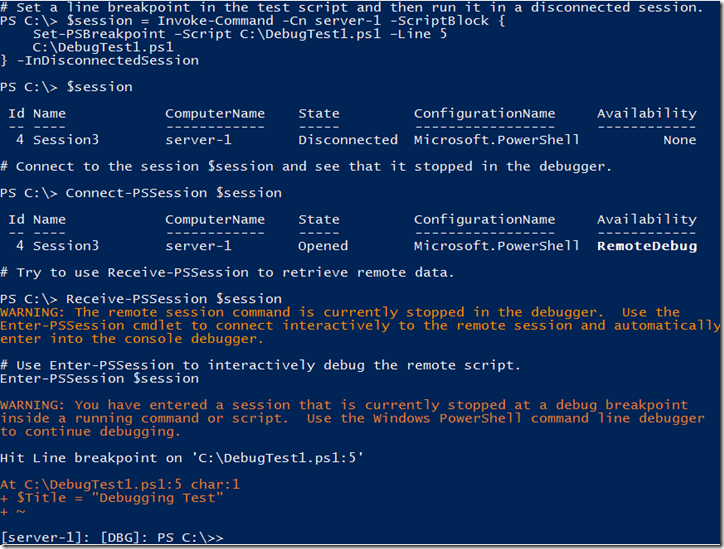 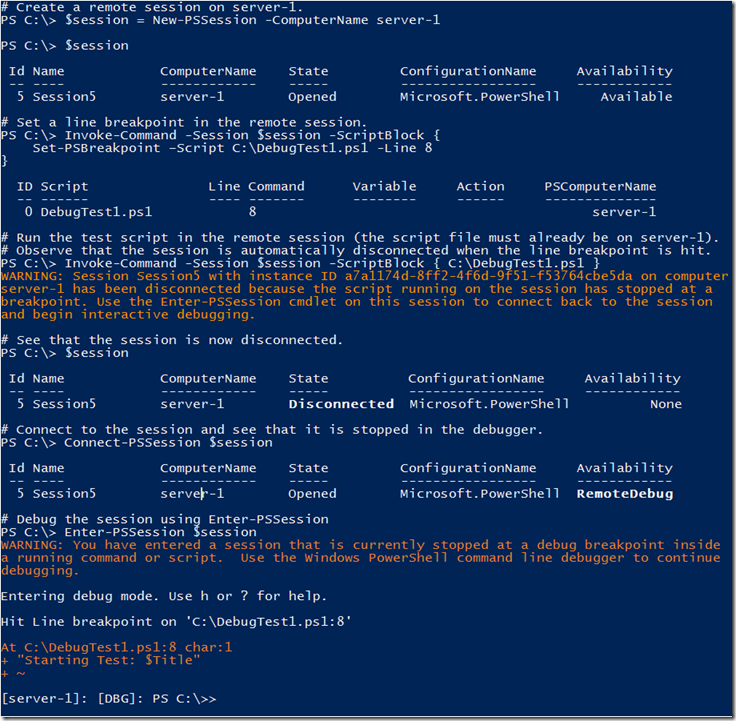 Debugging remote running scripts is an important and powerful extension of PowerShell script debugging. No longer do you need to copy script files from a remote machine to your local machine just so you can debug them. Now you can debug script right on the remote machine and in that context.