Let’s use DSC to configure something complicated!  In past blogs, we’ve shown you how to use Windows PowerShell Desired State Configuration (DSC) to configure relatively simple systems.  However, the technologies you deal with on a day to day basis can sometimes become complicated.  Don’t worry, DSC can still help simplify configuration.  Let’s use SQL AlwaysOn Availability Group (AG) as a example. SQL AG is a new SQL feature that enables replication on top of Windows Server Failover Clustering. While the feature is cool, configuring the environment is quite complex. It involves many steps across multiple machines. Some steps in one machine might depend on progress or status of others.

In this blog post, we will demonstrate using DSC to configure a SQL AG. When using the provided example, one PowerShell command will deploy a SQL AG on Virtual Machines (VMs).

Using the DSC configuration scripts described in this blog you can fully deploy and configure the following environment: 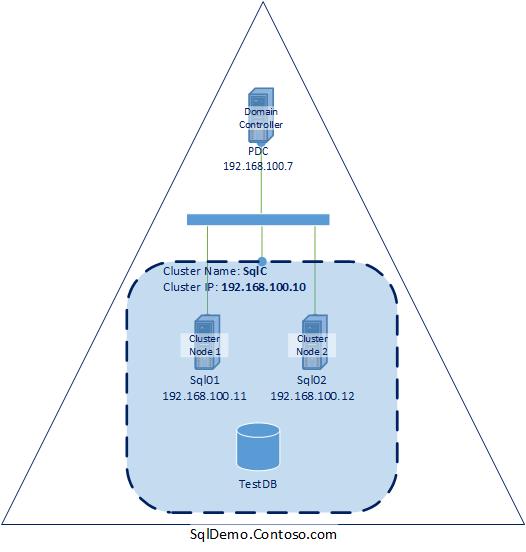 Configuring the Host and VMs

First, Deploy-Demo.ps1 runs Dsc-SqlDemo\ConfigSqlDemo.ps1.  This configures the host machine by doing the following:

2.       Ensure that a local user called vmuser is present, so that VMs can access data in host

4.       Ensure that three VMs are created in the correct state by:

o   Ensuring that a DSC Configuration, DSC Resources, and other files are copied to the VHD image.

o   Ensuring that the VMs are started from the VHDs.

Once the host machine is configured, we have three VMs running.  Each of these VMs has a configuration that has been bootstrapped into it.  Because of the way we bootstrap the VMs, they will configure themselves after startup, using the .mof we have injected into them.

Stay tuned for a blog post about the bootstrapping procedure.

The .mof file injected into the Primary Domain Controller (pdc) VM was generated from the configuration in Dsc-SqlDemo\Scenarios\nodes.ps1 from the node statement è Node $AllNodes.Where{$_.Role -eq “PrimaryDomainController” }.NodeName

4.       Sets  up a network share folder that will be used in the SQL replication process

The .mof file injected into the first SQL Server (Sql01) VM was generated from the configuration in Dsc-SqlDemo\Scenarios\nodes.ps1 from the node statement è Node $AllNodes.Where{$_.Role -eq “PrimarySqlClusterNode” }.NodeName

1.       Ensures that the machines IPAddress is correctly set

2.       Ensures that necessary WindowsFeatures are present

3.       WaitFor Primary Domain Controller to have created the AD Domain

6.       Ensures that Firewalls are configured such that Sqlbrowser.exe and SqlServr.exe are accessible in the private network.

7.       Ensure that a Windows Cluster is created and that Sql01 is added to the cluster

8.       Ensure that the SQL Server for High Availability (HA) service is enabled

10.   Ensure that the SQL HA group for databases is created (in the demo, TestDB)

The .mof file injected into the second SQL Server (Sql02) VM was generated from the configuration in Dsc-SqlDemo\Scenarios\nodes.ps1 from the node statement è Node $AllNodes.Where{$_.Role -eq “ReplicaSqlClusterNode” }.NodeName

1.       Ensures that the machines IPAddress is correctly set

2.       Ensures that necessary WindowsFeatures are present

3.       WaitFor Primary Domain Controller to have created the AD Domain

6.       Ensures that Firewalls are configured such that Sqlbrowser.exe and SqlServr.exe are accessible in the private network.

7.       WaitFor the first SQL node to have created the windows cluster

9.       Ensure that the SQL Server for High Availability (HA) service is enabled

10.   Ensure that there is an Endpoint for the HA

11.   WaitFor the first SQL node to have created the HA group

Now that you have an understanding of the environment and what the DSC scripts do, let’s go ahead and deploy the environment using the scripts. Note there is quite a bit of preparation to complete before the scripts can be executed so please be patient.

To simulate a SQL AG, we need a decent machine that is capable of running Windows Server 2012 R2 and Hyper-V (64-bit) with at least 16GB of RAM and around 100GB of free disk space. Because this is a demo, we also recommend that you not store important items on the machine, in case it is cleaned up.

The following software are needed to perform the steps in the demo.

1.       An evaluation version of Windows Server 2012 R2 Datacenter (both ISO and VHD). A download can be found here.  Note: We need both the VHD and the ISO because SQL Server requires .Net 3.5, which is not available in the VHD. Fortunately, in the expanded ISO image, there is a folder named Sources\sxs, that includes all .Net 3.5 files.

To do this, we first create a self-signed certificate on the host machine, then copy it with private key to the target machines.  We then install the certificate to the target’s local machine certificate store. Since private key should be kept secret, it is important to clean them up as soon as possible (instructions can be found below).   Again, with this, please ensure you do NOT run the demo in production or on machines that require security by default.

·         Create a certificate with CN=DSCDemo. To do this, open a PowerShell console with Administrator elevation, cd to place that can see MakeCert.exe, and run the following command (notice, for security reasons, I make the cert expire as soon as possible, please adjust the highlighted date as needed).

The command line above will create a self-signed certificate on localhost certificate store (cert:\localMachine\My, with Subject = “CN=DSCDemo”).  Remember the subject, we will need it very soon. In my example, the UI in the certificate store looks like the following in (Certificates(Local Computer)\Personal\Certificates)

·         Public key. Export the public key of the certificate.  You can do this manually, or do it with the following PS script. In my example, I saved the public key as: C:\keys\Dscdemo.cer”

·         Private key and protection-Password. For security reason, export the private key certificate as the following:

o   In Personal\Certificates, find the certificate Issued to “DSCDemo” as shown above. Right click and select the “Export…” option.

o   UI will ask you for apassword for the protection. Enter and remember your password, youneed it very soon. For this demo, we used P@ssword

o   Export the certificate to the appropriate folder.  In my example, it is C:\keys\Dscdemo.pfx

·         Certificate Thumbprint. Run the following PS script to get certificate’s thumbprint, we need it very soon.

With above steps, we need update deployment scripts to point to the correct certificate values.

Update the following places in the deployment scripts:

At line 56, modify the file to point to your private key location.

At line 145-146, modify the file to point to your certificate file and Thumbprint:

This corresponds private key protection password. Change it to the value you just entered.

3.       Install the certificate to the VMs.  Now that we’ve done steps 1 and 2, the deployment script will do the following automatically:

1.       Encrypt credentials for the environment that is going to set up.

2.       Copy the private key and the script (installcert.ps1) that holds the private key protection password to each VM’s VHD file (into the VHD’s c:\deployment folder). Once the VM is started, it will install the certificate with the private key.

4.       Clean up the certificate.  After you are done with the demo, please remove certificate and keys as soon as possible with the following steps:

2.       Remove the self-signed certificate we just created. In my case, I used the UI to go to Certificates(Local Computer)\Personal\Certificates, and deleted certificate issued to DSCDemo

4.       Delete the xml files under deployment (pdc.xml, sql01.xml, sql02.xml) because they have passwords for VMs bootstrap.

Before we can run the demo, we need to make sure that we have all of the necessary files in the appropriate places.

1.        Confirm that the host machine is running Windows Server 2012 R2. If that is not the case, you can expand the ISO downloaded above to DVD, and install Windows Server 2012 R2 from there. The host is also required to have Hyper-V. Please see the Hyper-V Start Guide in the reference section for more details on Hyper-V.  It is recommend to upgrade the OS with latest patches by running Windows Update.

4.       Copy the Windows Server ISO to C:\SqlDemo. To make things simple, you can rename the file to a short name. In my case, this looks like: C:\SqlDemo\WS12R2.ISO 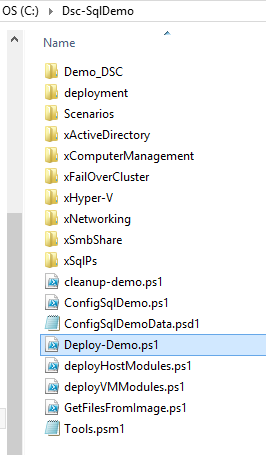 Now that we’ve copied the ISOs into the necessary locations, we need to extract some of their content.  Specifically, we need to get the sxs files (which include .Net 3.5), and the SQL content.  While there are many ways to do this, the simplist way in this situation is to run the “GetFilesFromImage.ps1” script in DSC-SqlDemo folder.

1.       Open a Windows PowerShell console (with Administrator privileges), and cd to the Dsc-SqlDemo folder.

Figure 1: Note: -SrcPath has no driver letter because we don’t know which driver letter the ISO image will mount to until runtime.

3.       Similarly, get the entire Sql ISO content by running the following script:

It’s important to ensure the configuration data file (c:\dsc-SqlDemo\ConfigSqlDemoData.psd1) has the correct information. If you used the same paths as above for SqlDemo, and are okay with using the default credentials, the demo should work without any change. However, if SqlDemo and underneath files is in different path, driver, or name, their locations need to be updated in the data file.

By default, “P@ssword” is the password for every credential. You can change to your own if you would like, but please remember them. And don’t forget to do clean up after the demo.

Also, notice, those three VMs are created in private network of the host. In another word, they are only visible to each other and the host. To make vm access software’s on the host, we create a local user: vmuser, which could read access to SqlDemo folder (in my case: c:\SqlDemo).

Confirm that the following paths in the ConfigSqlDemoData.psd1 file are correct:

Once everything is ready, running the demo is as simple as this:

The script will ask you to enter password for private domain administrator, sql administrator, user to access host file share, and user on the host for the file share access. The last two should have the same password. In my example, I entered “P@ssword” four times for the sake of simply.

After about 30-60 minutes, the SQL AG will be set up across three VMs running on the host machine:

Verification (How do you know it worked)

It’s worth noting that when the configuration returns success on the host machine, that only indicates that the VMs have been created, NOT that SQL AG deployment on VMs is completed.  The deployment takes about 30-60 minutes, so be patient with the installation script.

To check for complete status:

To debug a failure:

4.       Under “AlwaysOn High Availability”, you should see something like the following snapshot: 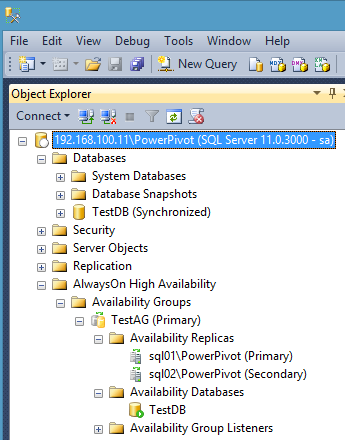 8.       Check that it is replicated on the second node shortly thereafter.

This example is far more complex than most others that have been shown or created.  As such, it demonstrates many characteristics of configurations that may be lost in the simpler scenarios.  Here are a few things we think are worth noting.

That’s it!  Let us know what you think in the comments.

PowerShell Team February 25, 2014
0 comment
Want to Automatically Configure Your Machines Using DSC at Initial Boot-up?
Often times, IT Pros want to automate software installation and configuration upon a machine’s initial boot-up. This blog will walk you through how to use Windows ...