As part of Building NuGet 3.x, we have been working on a significant re-architecture of NuGet.org. Progress has been steady and we are starting to see a return on investment. In this post, we’ll compare the legacy architecture to where we’ll be in the near future.

One of the goals when the NuGet Gallery project was started in 2011 was to provide a reference ASP.NET MVC application hosted in Azure. The project would follow our own prescriptive guidance and leverage the frameworks we build within our group:

Deploying this architecture was really straight-forward.

We also used EntityFramework’s database migrations, running them automatically when we deployed a new Web Role, and thereby keeping our production database schema in sync with the running code.

During a deployment, we’d publish the update to the Web Role’s Staging slot, perform verification, and then do a VIP swap.

When the gallery was first introduced, the initial impression was that the site was fast.

Congrats to @JeffHandley and @haacked and team on the new #nuget site launch! http://nuget.org #fast

December 6, 2011 was a good day. We were proud of the new gallery. The code was simple, worthy of showcasing as “how to build web applications to run in Azure.” And the users agreed; the reception was thoroughly positive.

Fast forward a couple of years though, and complaints about NuGet being slow became commonplace. Search was slow, package installations were slow, the website was slow, everything was slow. Even worse, people regularly complained about NuGet being down. Any interruption in SQL Azure or Azure Web Roles would directly affect the gallery.

With the legacy architecture, let’s take a look at what happens when a you right-click on a project and select ‘Manage NuGet Packages’.

This means that every time a user opens the NuGet dialog in Visual Studio, we perform a SQL query. In 2011 that was okay, but after NuGet started shipping with Visual Studio, it quickly became a scalability nightmare. We were essentially hitting ourselves with a distributed denial of service attack. This became all too clear the day that Visual Studio 2012 shipped with NuGet in the box, and the feed went down for several hours.

NuGet Package Restore exacerbated the scalability challenges. This feature allows projects to omit packages from source control and download them during build. Since the packages are served from Azure Storage, it shouldn’t be that big of a deal; except the NuGet client needs to discover the package URL from the OData feed. As you might guess, this results in a SQL query. And any time we failed to process that query in time, builds would break. Ouch!

We Had it Backwards

NuGet.org is an extremely read-heavy system, with millions of reads for every write, yet the architecture favored write-heavy systems that need to be immediately consistent. SQL Server, EntityFramework, and WCF Data Services with OData are great for systems where you have a relatively small number of users performing a similar number of reads and writes and where changes must be immediately reflected. But we have millions of users who need to reliably perform reads on relatively static data. Our architecture should reflect that.

It’s difficult and costly to scale a fully consistent system to support the number of users that NuGet has. Fortunately, most of NuGet doesn’t need to be fully consistent; eventual consistency (within a few minutes or less) will suffice. Embracing this mindset with patterns like Command Query Responsibility Segregation (CQRS) and Event Sourcing enables us to work toward avoiding compute for the vast majority of NuGet’s reads. This approach will address the scalability concerns we have with the current system.

The majority of the NuGet team is now working on a new architecture. When we began the effort, we knew we needed to:

When we look at the NuGet.org service, we can break it down into a few buckets with different availability goals:

With these goals and scenarios clearly defined, we then understood what we needed to do:

With the conclusion that we didn’t want to change the CRUD-style architecture for the website and package uploads, we needed an approach for layering incremental update processing on top of the existing system. The database behind the website and package uploads will remain as-is, but we will query it from the back-end worker to extract changes. Then we’ll use the set of incremental changes to apply the updates to the Search Service and task-based presentations.

We started with the Search Service. With its index in storage and cached in memory, we built a job in our Work Service to compare the database’s package data to what is stored in the Lucene index. We fine-tuned this and reached a point where we can update the index every minute without incurring any costly load on the database. This has been running in production for a few months and we’ve proven that we can effectively and efficiently extract and process incremental updates from our existing database.

With that success behind us, we moved onto building a pipeline to produce presentation models to be used by the client. We can produce a full catalog of NuGet.org’s packages, efficiently and incrementally update it, transform those updates into the task-based presentation models, and persist those models into Azure Storage. We’re making changes to the NuGet client to read these presentations out of storage through our CDN instead of making OData queries.

Knowing that the full server and client changes would take several months to get into place, we’ve been incrementally patching the legacy architecture. Here’s what is in place today:

A subtle but impactful difference is that we intercept OData requests for Search and Package Restore and produce those results through our Search Service instead of allowing those queries to reach the SQL database. We update the search index asynchronously using back-end jobs. We also introduced a second SQL database with a star schema for producing package statistics reports and then a third SQL database for managing the Work Service’s queue. 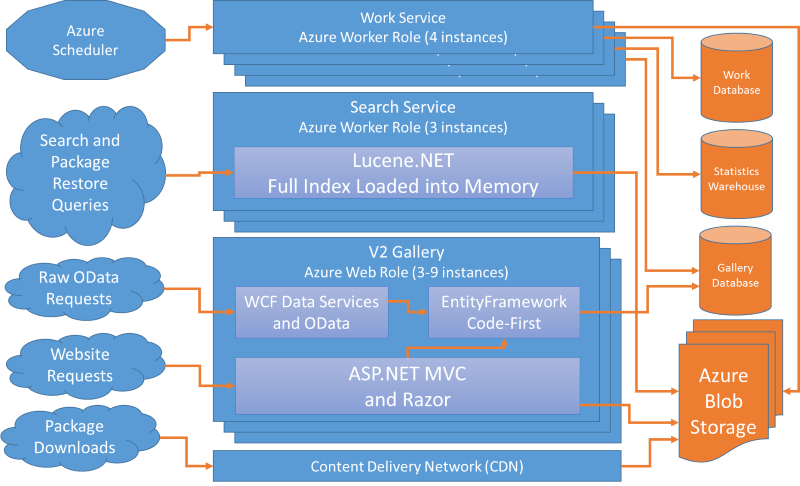 These changes introduced both the new Search Service and the Work Service as Azure Worker Roles. But we’ve also made some other deployment changes to improve availability of the gallery.

Our current OData-based API is NuGet’s second API format, therefore we’ve been referring to our new implementation and the materialized presentation models as “API v3”. We are preparing to deploy API v3 in a CTP form very soon and we’ll post more details about it at that time. We know that we’ll be making quite a few changes between CTP and the stable release but we’ll invite ecosystem partners to work against the API and give us feedback.

This new architecture helps us achieve some fundamental capabilities:

Jeff Handley
July 15, 2014
0 comment
A New Package Statistics Warehouse
The Warehouse is Dead, Long Live the Warehouse! Back in June, we blogged that our package statistics were full of lies. We made a fix and expected reports to become ...