We heard from you that direct dependencies are easy to track, but that you struggle with tracking transitive dependencies. We want to make that easier for the day-to-day management of your NuGet packages in Visual Studio.

There is now a new dependency section labeled “transitive packages” that you can optionally collapse or expand depending on your daily use. 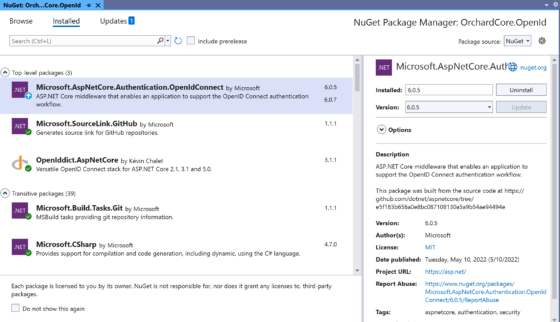 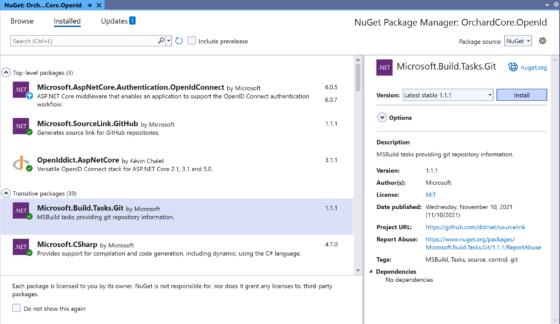 Lastly, you can hover over any transitive dependency to understand the top-level dependencies that brought it into your project.

Why should I care?

Managing dependencies for a project is an important task that requires more due diligence than ever to correctly keep track of the many libraries you may depend on.

There is a critical need for a clear insight into your dependency tree to understand the various nuances of a vulnerable path in your codebase that may be newly introduced by disclosed vulnerabilities.

To make this problem more complex, it is common that majority of vulnerabilities are found in indirect dependencies which can make remediation challenging.

Not only will these features help you understand your dependency graph better, they should also help you perform routine security audits to help improve the security of your software supply chain. Knowing about your dependencies is half the battle. You can be more confident in the security of your transitive dependencies when assessing your organization’s risk of direct and indirect dependencies. The other half is creating proper security policies that address the major concerns of using open source software and reduce the amount of time it takes to fix a known vulnerability.

We’re excited to see you use this feature in Visual Studio & include it in your toolset for building the most secure and amazing things with .NET. If you don’t have access to it yet, don’t fret. We are working to release it to everyone in an upcoming Visual Studio release. While we run this experiment, we will also be assessing the feasibility of bringing deprecation and vulnerability affordances to your transitive dependencies and ensure you can remain secure.

For more details on this feature, read up on how NuGet resolves package dependencies and some of the best practices for a secure software supply chain.

Your feedback is important to us. If there are any problems with this release, check our GitHub Issues and Visual Studio Developer Community for existing issues. For new issues within NuGet, please report a GitHub Issue. For general NuGet experience issues, let us know via the Report a Problem option found in your favorite IDE under Help > Report a Problem.

Announcing NuGet 6.3 – Transitive Dependencies, Floating Versions, and Re-enabling Signed Package Verification
NuGet 6.3 is included in Visual Studio 2022 and .NET 6.0 out of the box. You can also download NuGet 6.3 for Windows, macOS, and Linux as a standalone executable. NuGet ...

Jon Douglas, Nikolche Kolev
August 9, 2022
14 comments
NuGet Season of Giving
NuGet has gone through a lot of changes over the last 10 years. From the package manager console, standalone NuGet.exe, and integration of NuGet into the .NET SDK, we ...