Many developers have asked us, “how can I get to the browser DevTools for my Microsoft Teams app when it’s running in the desktop client?” After all, when Teams is running in a browser, it’s easy: F12 (on Windows) or Command-Option-I (on MacOS).

While apps running in the web version of Teams and the desktop version of teams are almost exactly the same, there are some differences, particularly with respect to authentication. Sometimes the only way to figure out what’s going on is to use the DevTools. There’s been an undocumented way to get to them since the earliest versions of the desktop client, but we’ve never exposed an official way…until today.

To use it, first open up a tab (it also works with the bot signin action) so you have something to inspect with the DevTools.

On Windows, you open DevTools via the Microsoft Teams icon in the desktop tray: 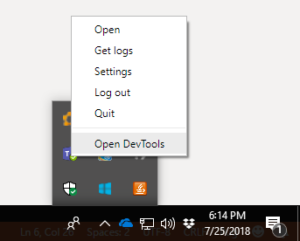 On MacOS, you open DevTools by clicking on the Microsoft Teams icon in the Dock: 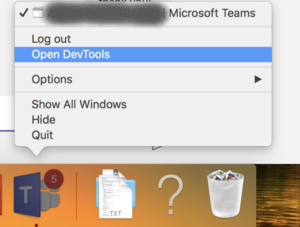 Here’s what a sample tab looks like with the DevTools open and an element selected: 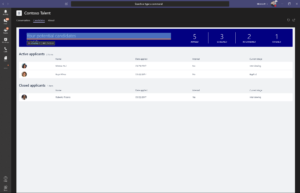 And here’s what the DevTools window looks like for this tab: 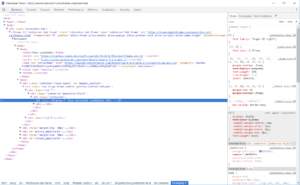 While this feature is live worldwide today, you may have to quit and restart Microsoft Teams to use it (I did). You’ll only have to do this once, if you have to do it at all.

2018 Office App Awards-Nominations now open
Across the Office platform, we’ve seen an amazing set of new applications developed, spanning from Office-integrated mobile applications, to new SharePoint web parts, to bots and integrations. We’d love to feature some of the best applications and integrations you’ve seen, but we need your help.

Office Add-ins team
August 2, 2018
0 comment
New SharePoint CSOM version released for SharePoint Online – July 2018
We are happy to announce the availability of new SharePoint Client-Side Object Model (CSOM) version targeted for the Office 365 or more specifically for SharePoint and Project Online. This was mainly a small maintenance release with minimal updates on the CSOM API surface. The July 2018 release was delayed until early August due small timing issues.