Roslyn, the .NET compiler platform, helps you catch bugs even before you run your code. One example is Roslyn’s spellcheck analyzer that is built into Visual Studio. Let’s say you are creating a static method and misspelled the word static as statc. You will be able to see this spelling error before you run your code because Roslyn can produce warnings in your code as you type even before you’ve finished the line. In other words, you don’t have to build your code to find out that you made a mistake.

Roslyn analyzers can also surface an automatic code fix through the Visual Studio light bulb icon that allows you to fix your code immediately.

But what if you could catch even more bugs?

Let me introduce you to Roslyn analyzer packages. These collections of analyzers provide a more verbose analysis, but don’t ship with the default Visual Studio tools. To learn more about our favorite Roslyn analyzers visit our Roslyn analyzers GitHub repository. This repository includes the FxCop rules that are still applicable to modern software development, but now target our modern code analysis platform based on Roslyn. Let’s go ahead and install this package to be more productive and write better code faster!

To Install FxCop analyzers as a NuGet package: 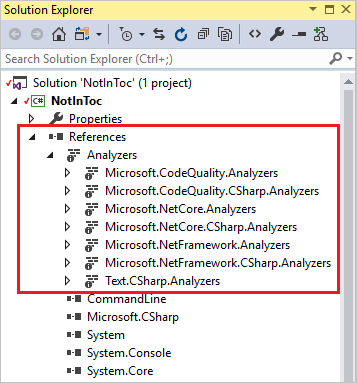 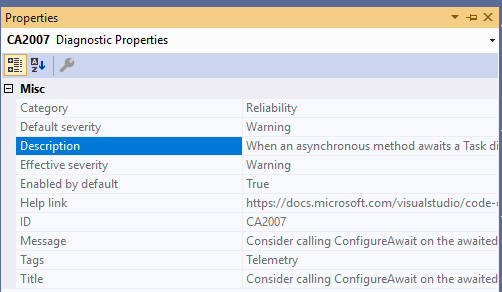 The icons next to each diagnostic in Solution Explorer correspond to the icons you see in the rule set when you open it in the editor: 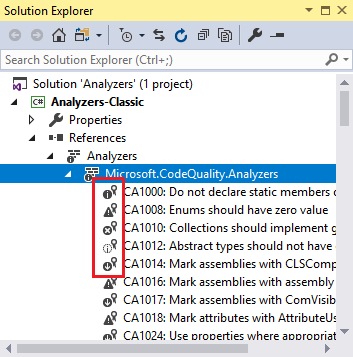 If you set the rule severity to a warning you will then receive a warning in your code for that specific rule set. 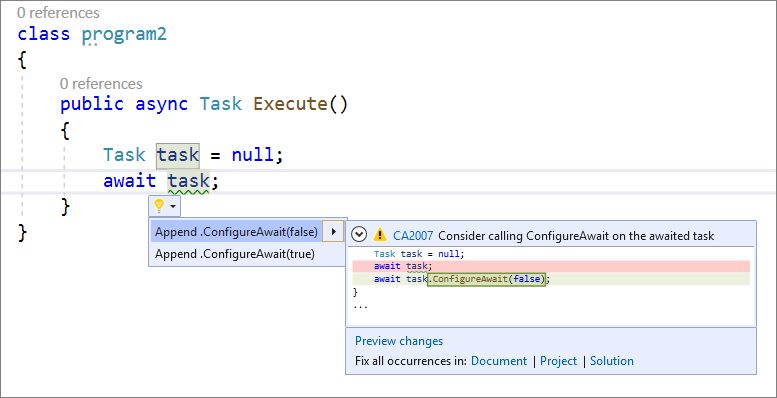 Now that you understand how analyzers work you can be more productive and write better code faster!

Q: This warning appears in Visual Studio: “Run Code Analysis has been deprecated in favor of FxCop analyzers, which run during build. Refer to https://aka.ms/fxcopanalyzers to migrate to FxCop analyzers”. What does this mean? A: FxCop is the Code Analysis engine that predates Roslyn by almost a decade. Just like we moved our compiler forward (e.g. introduced Roslyn), we are also moving our code analysis technology forward to the Roslyn platform. Since it is powered by the .NET Compiler Platform it can produce warnings in your code as you type. In other words, you don’t have to build your code to find out that you made a mistake.

Q: Can I write custom analyzers? A: Absolutely! Documentation on how to write an analyzer is found here.

Q: Do analyzers work in continuous integration (CI) builds? A: Yes, analyzers installed as NuGet packages can be enforced in CI builds.