Wondering why mscorsvw.exe has high CPU usage? You can speed it up.

This post was written by Rich Lander, a Program Manager on the .NET Framework Team. It was written for people who want to understand why mscorsvw.exe is running on their machines and want to know how to speed it up.

Have you noticed that your machine is slowing down, and you’ve looked in Task Manager to find that mscorsvw.exe is the culprit? If so, this post will help you resolve those performance issues. Mscorsvw.exe is a component of Windows, and is otherwise known as the .NET Framework Optimization Service. It optimizes your machine to launch apps faster.

Most of the time, users do not notice mscorsvw. If you are noticing it and would like it to stop affecting your computer’s performance, we recommend that you run the script provided below. This script will cause mscorsvw to run at maximum speed in order to complete its work faster, and will likely slow down your machine during that period of time. Once the script has completed its work, it will close itself. If you notice mscorsvw again, you can re-run this script, however, we hope you don’t need to do that.

Why do I need mscorsvw and the .NET Framework?

Millions of software developers around the world choose to write apps using the .NET Framework, which is provided by Microsoft. You’ve probably used many apps built with the .NET Framework without even knowing that. The .NET Framework includes a technology called Native Image Generator (NGEN) that makes apps launch much faster and that periodically does work to optimize your machine. You can read more about this technology in a related post: Got a need for speed? .NET apps start faster.

How can I tell if mscorsvw is running? 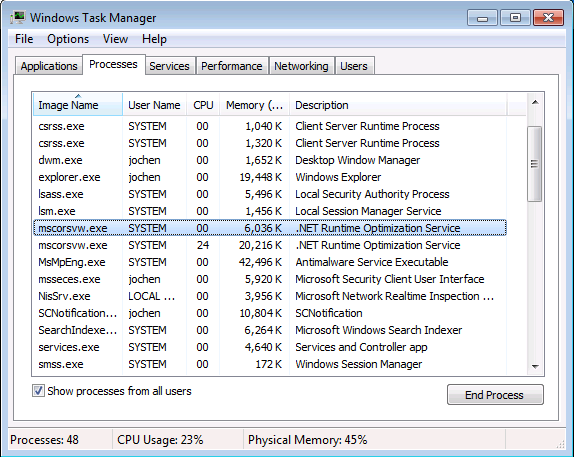 How often and when does mscorsvw run?

The first case doesn’t happen very often. The .NET Framework comes with Windows, so you often already have the .NET Framework version you need to run a given app. The second case happens more often. We update the .NET Framework a handful of times of year, usually to improve security. These updates will typically occur on a “patch Tuesday,” if you are familiar with that term.

In Windows 8, we changed the .NET Framework Optimization Service, to operate in more of a silent mode. It only does work during idle time (when you are not actively using your computer). That means that you should never notice it, even if it is operating during the day.

Can I disable or turn off mscorsvw?

We do not recommend turning off or killing the .NET Framework Optimization Service in Task Manager. It is performing an important task for your machine and will help your apps launch much faster, once it’s done that work.

However, you can speed up the .NET Framework Optimization Service. By default, it only uses one CPU core. Instead, you can tell it to get its work done as quickly as possible by using more cores (currently, it will not use more than 6). That way, it will get its work done faster, and you can get on to other things.

Tell me more about the script. What are the mscorsvw commands?

These commands assume that Windows is installed on the C drive. If that’s not the case, you can change the drive letter, or use the %windir% environment variable (ex: %windir%Microsoft.NETFrameworkv4.0.30319ngen.exe executeQueuedItems)

These commands must be typed from a command prompt that you have “run as administrator”. If not, you will get an error message that directs you to run the commands with administrative credentials.

You can learn more about .NET Framework optimization in our other post on this topic: Got a need for speed? .NET apps start faster.

.NET Team
August 7, 2013
0 comment
Documentation updates for .NET 4.5.1
This post describes the changes that we’ve made to .NET Framework documentation for the .NET Framework 4.5.1. It was written by Cheryl Simmons, who works on the .NET...