We continue to support and innovate in Windows Forms runtime. Let’s recap what we’ve done in .NET 6.0.

Making Windows Forms applications more accessible to more users is one of the big goals for the team. Building on the momentum we gained in .NET 5.0 timeframe in this release we delivered further improvements, including but not limited to the following:

In .NET Core 3.0 we started to modernize and rejuvenate Windows Forms. As part of that initiative we changed the default font to Segoe UI, 9f (dotnet/winforms#656), and quickly learned that a great number of things depended on this default font metrics. For example, the designer was no longer a true WYSIWYG, as Visual Studio process is run under .NET Framework 4.7.2 and uses the old default font (Microsoft Sans Serif, 8.25f), and .NET application at runtime uses the new font. This change also made it harder for some customers to migrate their large applications with pixel-perfect layouts. Whilst we had provided migration strategies, applying those across hundreds of forms and controls could be a significant undertaking.

To make it easier to migrate those pixel-perfect apps we introduced a new API (for more details refer to the Application-wide default font post):

However, this API wasn’t sufficient to address the designer’s ability to render forms and controls with the same new font. At the same time, with our sister teams heavily pushing for little code/low ceremony application templates, our Program.cs and its Main() method started looking very dated, and we decided to follow the general .NET trend and trim the boilerplate. Please welcome the new Windows Forms application bootstrap:

ApplicationConfiguration.Initialize() is a source generated API that behind the scenes emits the following calls:

The parameters of these calls are configurable via MSBuild properties in csproj or props files. The Windows Forms designer in Visual Studio 2022 is also aware of these properties (for now it only reads the default font), and can show you your application (C#, .NET 6.0 and above) as it would look at runtime: 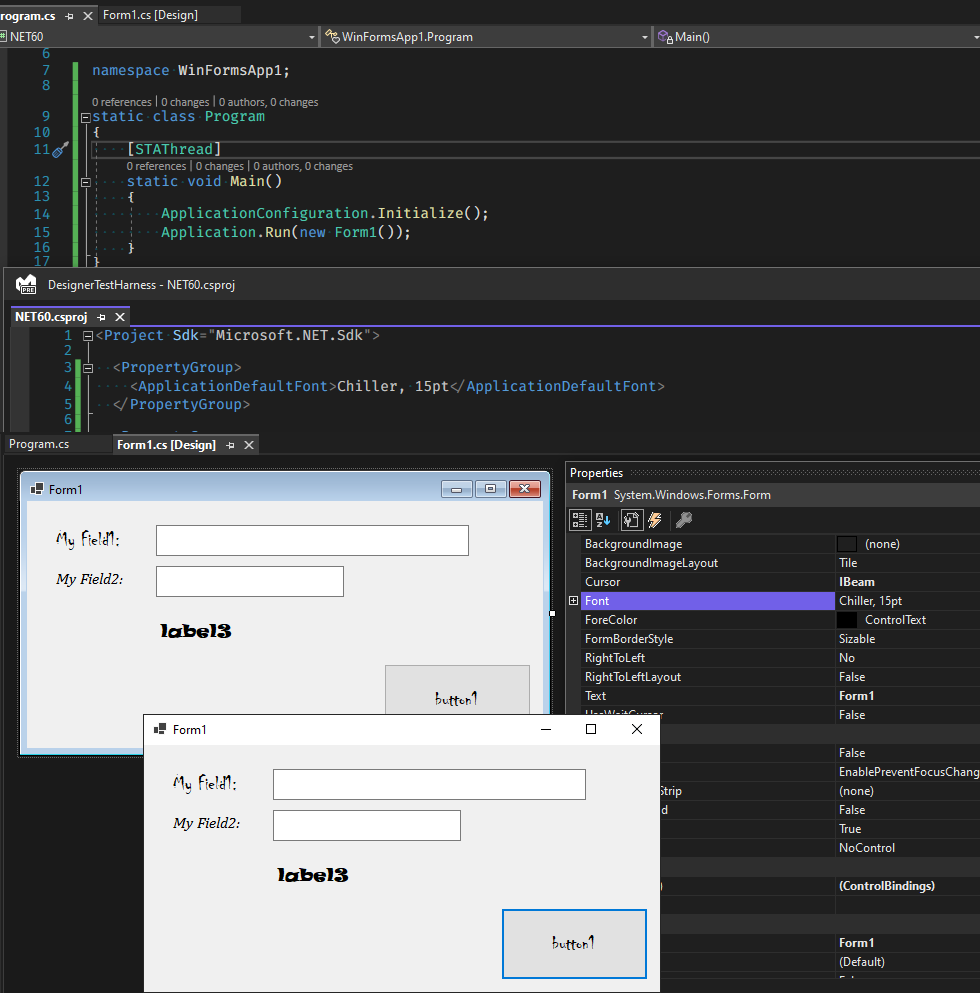 (We know, the form in the designer still has that Windows 7 look, We’re working on it…)

As mentioned above we have updated our C# templates in line with related changes in .NET workloads, Windows Forms templates for C# have been updated to support global using directives, file-scoped namespaces, and nullable reference types. Because a typical Windows Forms app requires a STAThread attribute and consist of multiple types split across multiple files (e.g., Form1.cs and Form1.Designer.cs) the top-level statements are notably absent from the Windows Forms templates. However, the updated templates do include the application bootstrap code. We have completed porting missing designers and designer-related infrastructure that enable building a general-purpose designer (e.g., a report designer). For more details refer to our earlier announcement. 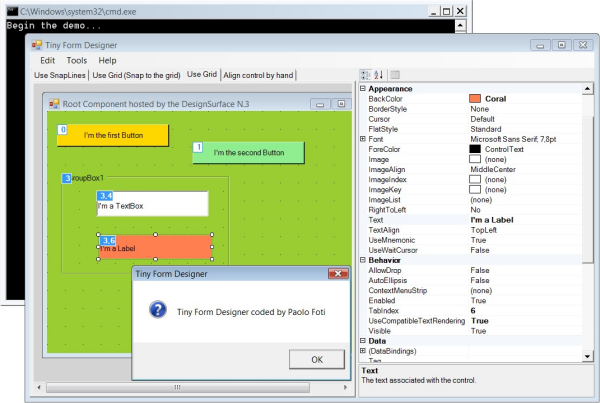 If you think we missed a designer that your application depends on, please let us know at our GitHub repository.

We’ve been working through the high DPI space with the aim to get Windows Forms applications to correctly support PerMonitorV2 mode out of the box. It is a challenging undertaking, and sadly we couldn’t achieve as much as we’d hoped. Still in this release we made some progress, and we now can:

We’d like to call out a few community contributions:

Xin Shi
November 18, 2021
12 comments
Get to Know EF Core 6
Learn how to download and work with EF Core 6 and new features from improved support for Azure Cosmos DB to increased performance and first-class APIs to SQL Server temporal tables.